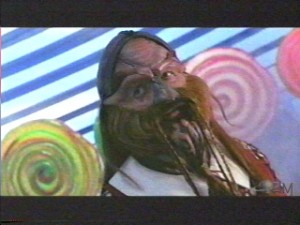 This episode was some kind of dream sequence virtual reality holodeck type deal, and it was written by Ben Browder, the hunky rocket scientist who plays Crichton. So basically I couldn’t make heads or tails of it. I was all set to just ramble on about computer games in this week’s column, but then it turned out that my partner Ed — who’s been watching Farscape longer than I have — actually understood the episode. So I asked Ed if he would ghost-write the column for me this week, and basically save me the trouble of figuring out what was going on. He agreed, which proves that a) he loves me and b) he’s a total pushover.

To be fair to Danny, I should say that I saw the episode twice, once when the episode first aired — Danny was working late, and I was lonely and bored enough to turn to Farscape for cold comfort — and again when he and I watched it together a couple days later. Any meaning I managed to extract from it might just be a sort of Heat Delirium brought on by repeated Farscape exposure. (Now where did I put those cooling rods and my black latex catsuit?) I should also say that I think the episode is a right old mess, and that the higher-ups at Farscape should keep little Benjy Browder away from the writing implements for the forseeable future. That said, there is some interesting stuff going on in this episode — and I don’t just mean Claudia Black’s accent.

I submit to you, gentle reader, that this whole holodeck episode is about Crichton’s anxieties — about Aeryn, about Scorpius, about his friends, and about the consequences of his actions.

First, for the mechanical mojo. Stark — who’s raving mad, get it? — has apparently created some kind of Pocket Simon virtual reality neural substrate matrix whosamabob expressly designed to trap Crichton as revenge for Crichton causing Zhaan’s death. We know this because Stark himself appears as the avatar of this little world — (By the way, avatar? No more nineties cyberpunk for you, Mr Browder!) — and he’s kind enough to provide something approximating exposition. Although, honestly, I don’t have the foggiest idea how Stark made the damn thing. And how did he make sure it would get to Crichton? It looks like Chiana discovers the game while rifling through a box of stuff she bought on Ebay. Whatever. Face it, even Browder can’t bring himself to care about the premise, so why should we? On to the symbolism!

The most obvious bit of symbolism — it’s in the title, for Crichton’s sake — is the image of Don Quixote. Is Crichton fighting actual monsters, or tilting at windmills? I don’t think that this is anything like the dreary suggestion on last season’s Buffy that the whole thing might be in the protagonist’s head — ugh — but I do think the question is meaningful. John fights a lot of monsters. Some are physical, others emotional. Some are real, and some are self-generated. Which is which? Can he even tell them apart? He can’t always, and that worries him something awful.

Through this episode, everyone keeps asking him, “Are you really John Crichton?” It’s an important question, both mechanically and metaphorically. Is he the original Crichton or the carbon copy? And who has he become since leaving Earth? All he can do is say, “I think so.”

One of my favorite bits in the episode is the John-Headroom elevator operator, who tells Crichton that he hates his job — every day it’s the same thing, up, down, up, down. Just once he’d like to go sideways. This is exactly Crichton’s life, bouncing from one crisis to the next, with barely a moment to recover, let alone be the sort of astronaut he trained to be. if only he could go sideways — to find some peace, to open a wormhole.

The game makes Crichton’s frustrations and anxieties manifest. Rygel just farts in everyone’s face and makes a nuisance of himself; nothing to do but off him. Crichton clearly has some nagging concerns about D’argo. D’argo is good at seducing the women of Moya (except Aeryn, of course); there’s something distressingly voracious lurking beneath a sometimes sweet exterior. Chiana is twinned because Crichton sees her as a bit two-faced, particularly given her scheming past. Who is the real Chiana, and what’s her agenda?

Crichton’s greatest anxieties, of course, are about Aeryn. Aeryn claims that Scorpius saved her from the heat delirium, and she’s asked Crichton several times not to hurt him. But why? Crichton isn’t as afraid that Aeryn is being controlled by Scorpius… he’s more afraid that she’s not, that something dark has passed between them, something that’s infected Aeryn.

(By the way… if the Old Woman and Sikozu aren’t in the game because Stark didn’t know about them, why does the game shift to a Moya with Scorpius on board? Stark doesn’t know Scorpius is there either. But I digress, and I’m only giving myself a headache.)

Beyond whatever ties bind Aeryn and Scorpius, Crichton worries that he has focused too much on Aeryn, possibly at the expense of getting Important Things done. At the beginning of the episode, when Stark mumbles something about a princess, Crichton immediately assumes that he must mean Aeryn. Who else could it be? She’s the one who lives in the penthouse of his heart. But the goal turns out to be Zhaan — or, rather, Zhaan as a stand-in for some higher cause or purpose. Call it Touched By a Cameo.

So, you ask, what is this purpose? Damned if I know. But damned if Crichton knows, either. When Crichton scribbles out the wormhole equations in his own blood — somebody, invent paper and pens for these people! — he tells Scorpius that the only thing missing is the single unifying symbol, currently hidden under Crichton’s shoe — hidden even from Crichton himself.

What’s the unifying symbol? Is there one? Or has it all been One Damn Thing After Another? Zhaan tells him, “A lot of people have died for the love of you” — a turn of phrase I find actually lovely. Have those lives been lost in vain? If only Crichton had the unifying symbol, perhaps he would know — know who he can trust, know whether to love Aeryn, know who he is. But the symbol remains elusive. And so he must go up, down, up, down, until one day, his next leap will be the leap home. Or something like that.

My Winter with Farscape – Episode 16