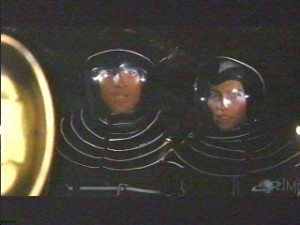 Aeryn and John are having relationship problems, which is not a huge surprise since they only have conversations in one-minute increments. In the last episode, Crichton asked Aeryn why she didn’t tell him she was pregnant, and she didn’t say anything, and then they just kind of stared at each other and ran out the clock. This week, they finally get around to talking to each other, and this is the entire text of their conversation:

Aeryn: Can I speak to you? Quite a few things I’d like to say.

John: There’s a lot of things I’d like to hear. I’d offer to buy you a drink, but…

Now, what can one say about the space weed? It latches on to Moya and instantly envelops the ship. The weed grows fast, and when it’s attacked, it eats even faster, down into every level of the ship in a matter of minutes. It even seems to be smart enough to know that when the crew is trying to poison it through the air vents, it should eat through the fan and stop them. This is quite the badass multi-tasking space weed; it makes you wonder why nobody ever thought to hunt it down and use it as a weapon, or a paint-stripper, instead of just leaving it lying around space for people to trip over.

Anyway, the space weed is just a distraction to get everybody running and shouting again, so that Aeryn and John don’t get to talk about the thing that’s really important — which is that Aeryn isn’t sure whether the baby she’s carrying is John’s or not.

It’s a good thing they’re out in space, because if they were on Earth, they’d end up on an episode of Jerry Springer called “I Need To Tell You: You’re Not the Daddy!” I kept expecting a member of the studio audience to get up and grab the mike: “Excuse me? My comment is for the lady? Yeah, I think you need to start looking at yourself, and stop blaming some space weed for everything. The weed didn’t tell you to go at it with some man! You can’t go blamin’ the weed every time! You need to have respect for yourself. That’s what you need. That’s all I got to say.” Then Aeryn gets up and shouts, “Well, YOU need to get out my BUSINESS!” And then security guards rush out and make everybody sit down.

Meanwhile, back on Farscape, they figure out that the weed is poisoned by an element in Scorpius’ cooling rods. I can’t figure out exactly what the element’s name is; it sounds to me like it’s either strontium or cilantro. Something like that. Anyway, they have tons of it. This is basically the Horror of Party Beach trick of figuring out in the last fifteen minutes of the movie that the monsters explode when they’re exposed to sodium, and then everybody runs and gets their salt shakers. It’s all about the badass space weed until about minute 52, and then it’s all, cilantro? Oh, sure, we got cilantro. I was just sitting around the other day wondering what we were going to do with these big piles of cilantro we got lying around. And that about wraps it up for the space weed.

So when that’s all over with, there’s just enough time for another one-minute conversation for Aeryn and John. Basically, he says, who’s the dad? And she says, I’m not sure. And he says, “I would put my life in your hands… but not my heart,” and then he walks away.

Now I have to wait until Friday to find out what happens next, and they’ll probably have another forty-five seconds together before the chainsaw-wielding pirahna monster busts in and starts eating people. I swear, these people need to get their priorities straight. You can either tear my heart into little pieces, or you can throw cilantro at space fungus. One thing at a time, kids, that’s all I’m asking.

My Winter with Farscape – Episode 14