My Summer with Farscape – Episode 5 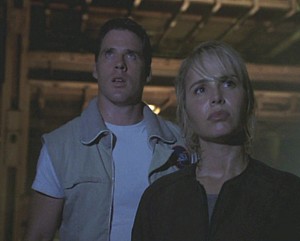 Pop quiz: Let’s say you’re an alien. Three assassins come to your planet and kill your Prime Hokothian. The appropriate response is:

(a) Get yourself a spaceship with a big gun, chase after the assassins, and arrest them when they stop to go to the bathroom

(b) Say to yourself, “Well, that’ll happen sometimes,” and start auditioning for a new Prime Hokothian

(c) Bioengineer a contagion that only you have the antidote for, manage to infect one of the assassins as she’s running away, wait until she’s split up from the other assassins and gotten back to her friends, build a hologram spaceship that looks really big but is actually really small, and then show up at the last minute to offer her the antidote if she tells you the names of the other assassins.

The correct answer, according to this week’s episode, is (c), and my question for the aliens of Farscape is this: Who has TIME for all that nonsense? I mean, for Pete’s sake. I feel like calling all the aliens into my office, and telling them that from now on, they’re expected to account for their time in fifteen-minute increments.

If that’s the typical way these guys go about things, it’s a wonder that Aeryn had to bother assassinating the Prime Hokothian in the first place. All she had to do was steal all his snacks. By the time they got around to bioengineering a convenience store, they’d all be dead from starvation.

She’s in the “Cooling Suit” because she has “Heat Delirium,” and if she’s not treated, she could end up suffering from “The Living Death,” which apparently would make her “Really Ugly.” So we can’t have that.

Everybody sort of flaps their hands around and doesn’t know what to do with themselves, until Ullom the alien arrives to explain everything. Ullom is the Chief Protector of the Prime Hokothian, and it turns out that he’s not very good at his job, because Aeryn killed the Prime H. right under Ullom’s nose, not that he has one [see illustration, above], and all Ullom could think of doing was to bioengineer a contagion and infect the assassins with it on their way out the door.

By the way, quick comedy tip if you ever come over to my house: The line “I bioengineered a contagion” is a guaranteed easy laugh, especially if you imitate Ullom’s bitchy nasal whine when you say it. I’ll give you an example. Me: “Hey, what did you make for dinner tonight?” You: “I bioengineered a contagion.” That’s all there is to it, comedy-wise.

The other big surprise this week is that Scorpius is alive, even though two weeks ago he got shot in the chest at point-blank range and buried. When they get around to asking him how he survived, his answer is “planning and foresight,” which in my opinion is just another way of saying, “I am the Astonishing Scorpioso, MASTER of Illusion! Tah-DAH!”

I’m looking forward to more big surprises in upcoming weeks, along these lines:

Crichton: The last time I saw Scorpius, he was handcuffed to a pirahna monster, and his head was covered with man-eating fire ants! There’s no WAY he survived that!

Scorpius: [arriving by parachute] But I did! Tah-DAH!

I mean, it’s a great act. But what do you do for an encore?