My Summer with Farscape – Episode 4 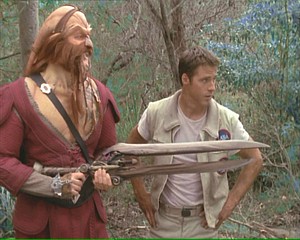 Okay, this is why I like Farscape: All the other science fiction action-type shows on television pretend that you can run and hide and shoot for days on end and never have to eat, sleep or go to the bathroom… but not Farscape. This week’s episode is all about farting and vomiting, and I for one find that refreshing. Here’s an actual line of dialogue: “Save me before my bowels rupture!” They just don’t say that kind of stuff on Star Trek.

The premise is basically this. Our heroes are drifting around aimlessly in space, and they’re starving, so the crazy old woman gives them something nasty to eat. Pretty soon, they have to land on the nearest planet so they can shit and projectile-vomit. Seriously. This all happens in the first four minutes.

Okay, so remember how I said that every planet in the Farscape universe is either an Australian beach or it’s Hell? Last time, it was the beach, so this time it’s Hell — or, apparently, a high-security parking garage in Hell. After the shitting and farting and vomiting, Rygel falls into a big multi-level cave system, which turns out to be packed with boxes full of gold and jewels. The place is just a huge cave with your typical drippy stone walls and dark tunnels, but as soon as Crichton and D’argo enter, they trip this high-tech laser-beam security system. It’s like Ali Baba and the 4-D Thieves.

Anyway, Rygel ends up getting blasted by the laser beams, up through the air and into a little cubbyhole that shoots a coating of amber all over him. This place was set up by the Tarkin, who apparently decided that the best way to protect their valuables was to store them in hexagonal boxes, seal them in amber, and throw them into pools of boiling lava. This storage system, in my opinion, has some serious design flaws, which may not be obvious at first glance. I’ll point these out as we go along.

But here come the comedy thugs, who moan and complain as they run up and down the dank corridors and shoot at the main characters, so basically it’s just another day of running and shouting on Farscape. The leader of the comedy thugs is a big mean-looking bug guy with a male pattern leprosy problem. After a whole bunch of action sequences, he finally meets Crichton and D’argo, and he hisses, “My name is… Raa’Keel.” Well, actually, what he says is, “My name is… rhhkkxchhhiihh,” and then I have to go and look the name up on a Farscape fansite. I know, I make fun of the Space Names every week, but it really isn’t playing fair for them to say “My name is,” and then just spit out random diphthongs and expect me to accept that as somebody’s name. I promise, I will stop making jokes about the Space Names as soon as they start having more reasonable names. (The same offer has been made to M. Night Shyamalan.)

Meanwhile, the boys are trapped, so Chiana and Sikozu have to figure out how to get the laser pulse cannon on D’argo’s ship to fire at the electrostatic barrier keeping them in. Trust me on that one. Now, they can’t use the controls on D’argo’s ship because it’s biolinked to his DNA, but they can get around that by going outside and smearing his vomit all over their hands. The controls pick up the traces of D’argo’s DNA on their hands, and then they can push buttons and everything’s fine. Okay, so stop me if I’m being too literal about all this, but has anybody here ever heard of keys? I mean, what’s the point of a DNA-based security system, if it’s just going to encourage carjackers to, let’s say, shoot you in the head and dip their hands in your splattered brain cavity before they drive away? I personally would have second thoughts about installing any locking device that requires my body fluids to operate, especially if I don’t actually have to be in the room at the time. I just think it’s asking for trouble is all.

The theme of today’s episode, really, is that Technology Of The Future Is Not Any Better Than The Technology We Have Today. After the whole hands-in-vomit thing, then Chiana and Sikozu spend minutes and minutes trying to figure out what complex sequence of buttons operates the cannon. They’re smart people, and clearly very experienced shooting weapons at things, but it takes them forever to figure out how to do it. Isn’t there a Big Red Button somewhere marked LASER CANNON? I mean, my laser cannon has one of those, and I got it on sale at Best Buy. You’d think the Big Red Button would be pretty much standard on any laser cannon in the universe, but not on D’argo’s ship. Even a spaceship constructed by Microsoft would at least have a little animated paper clip come out and say, “It looks like you’re trying to fire a laser cannon at an electrostatic barrier. Would you like help?”

Here’s some more examples of Bad Technology Of The Future. The comedy thugs are wearing electric body armor that protects against being shot, but not against being hit with rocks or doused in lava… which is why they chose that style of armor to go spelunking for treasure in a cave filled with rocks and lava. And how about that security system that puts up an electrostatic barrier to lock the crater entrance after the intruders have come in?

Basically, the Tarkin, if there are any left, are seriously in need of a user-interface consultant. They seem to specialize in making every dangerous thing concave and head-shaped. I’d hate to see their Cuisinarts.