My Summer with Farscape – Episode 3 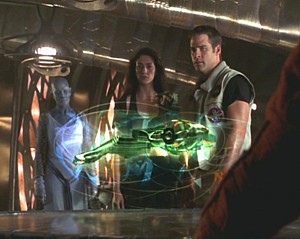 Last week, I posted this statement on the Tough Pigs discussion board: “I’d like to register the following plot point, so I can say That was really obvious when it happens in the next episode. The cliffhanger of the last episode was Crichton jumping off a cliff into the ocean, supposedly to his death. They’ve already established that there’s a big cranky fish character, who’s rescued Crichton from drowning before. Therefore, I call that the fish guy brings Crichton to shore, and any jokes that I make in my Farscape column mocking this plot point are hereby justified.”

Then I went on to make some promises about how I wouldn’t make fun of it if they didn’t make a big deal about it, but that was a transparent lie. The point here is that this goes some way toward proving my long-standing theory that cliffhangers that involve drowning aren’t scary if you’ve already established that you have a fish guy. Ditto “falling out of a window” and bird guy, ditto “menaced by a huge mouse” and cat guy, ditto “lost in the Swiss Alps and desperate for brandy” and St. Bernard guy.

Really, having any kind of animal guy is pretty much a tip-off that you’ve got something like this in mind. Nobody goes out of their way to make a fish guy willy nilly.

Probes probes probes, it’s only been two episodes and already I’m sick to death of ’em. And hey, so’s everybody else. The probes are reactivating, there’s magnetism everywhere, and if they don’t find the third probe and reactivate them soon, everybody’s going to die. Just another day on Farscape, really.

But D’argo has a plan, and this plan involves Crichton, naked, tied hand and foot on a stone slab and getting licked all over. As naturally it would. They give him back to Grayza — you know, the chick with the hypnotic cleavage sweat — and she interrogates him about wormholes while peeling his clothes off and caressing him with tiny razor knives. Okay, not to be too obvious about this, but this is the kind of interrogation I could really get behind. How come this never happens when I get interrogated?

Then, pretty much just for the sake of having something else to do, Grayza makes Crichton dig a big hole, and then she shoots Scorpius in the chest and dumps his body in the hole. She’s also got Sikozu — remember Sikozu? She’s the Bjork chick. Never mind, there’s no use trying to tell the space vixens apart on this show. Anyway, Grayza throws Sikozu in the grave too, and she’s about to bury Sikozu alive, when Scorpius — who isn’t quite dead yet — whispers to Sikozu, “Say Skernak! It’ll save you.” So Sikozu goes Skernak! which seems to impress Grayza quite a bit. Turns out Skernak! is special directorate code for Don’t shoot me! and it seems to work, cause she doesn’t.

Now, I could probably milk a couple cheap laughs out of this by saying Skernak! a couple times, but that’s such an easy gag that even I wouldn’t Skernak! No, sorry, I couldn’t resist.

Sikozu is grateful for the whole Skernak! thing, so she tries to persuade Grayza not to bury Scorpius… but Grayza isn’t convinced, and she has her flunkies fill the grave in over him. So, naturally, Scorpius is going to get saved by the mole guy. Wait, didn’t we bring a mole guy to this planet? Damn! You should always bring a mole guy. That’ll teach us not to pack at the last minute.

Gosh, there’s a lot left. There’s more naked interrogation action, more spanking and sweating and sticking bug parts up their noses. Sikozu comes and visits the locked-up Chiana and Jool, and they do this really complicated escape maneuver where Jool attacks Sikozu, Sikozu attacks Jool, Chiana attacks Sikozu, and Jool screeches so loud that Chiana and Jool’s handcuffs shatter. Luckily, Peacekeeper guards are specially trained not to move or think or do anything no matter what happens, so it’s not that hard to escape.

Meanwhile, Crichton escapes from Grayza. He meets up with the space vixens, D’argo is about to blast off, and the Peacekeeper guards keep shooting at them. Everybody sweats and pants and yells at each other. We’re not running FAST enough! We’re not shouting LOUD enough! That kind of thing.

So here’s my favorite part of the whole episode. Rygel crashes the dying Leviathan ship into the temple, and there’s a huge explosion. Jool says, “What happened?” and Crichton yells, “Who CARES! Just GO!”

And if that’s not the motto of the whole damn show, I don’t know what is. What happened? Who cares! Just go.

Next week: Skernak! Oh, I did it again.