My Summer with Farscape – Episode 11 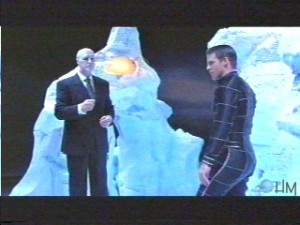 Let’s start at the beginning: Time, apparently, is a lake.

No, wait, that’s not the beginning. This is the beginning: the Farscape episode that I’m writing about aired on August 23rd, and right now it’s October 6th, six weeks later. I have two very good reasons for this temporal paradox. First, the column was always going to be a little bit late, since I was moving to a new house in late August and didn’t have the time. Then, by the time I was settled and ready to get back to Farscape, they’d cancelled the show. Which set me back a bit, as I’m sure you can imagine.

It’s kind of like that jarring feeling you get when you’re reading a magazine while you’re walking upstairs, and you think that there’s one more stair than there really is — so you miss the top step, and bang your foot down really hard. You know that feeling? It was kind of like that, except that your hamster is sitting at the top of the stairs, so instead of just stepping down too hard on the floor, you crush your hamster under your foot. I don’t know if you’ve ever had that specific experience, but it’s sort of unsettling and depressing and irritating all at once, like the universe is playing tricks on you while you aren’t looking.

I mean, I take my eyes off the damn show for five seconds, and they go and cancel it out from under me. You can imagine how I might feel.

So now here I am, six weeks later, and everybody still expects me to write about the damn show, and y’know what makes it worse?

What makes it worse is that this episode is all about a creepy white guy in a three-piece suit who spends the whole hour patiently explaining to Crichton why he has to be killed. And that just seems so much like a hideously ironic metaphor for the Sci-Fi Channel cancelling Farscape that I start to get that hamster feeling all over again.

Anyway, what happens is this: Crichton is wormhole-spotting again. He goes up right next to where a wormhole is about to open; he’s just hanging out in the vacuum there wearing a spacesuit. The wormhole opens, and he gets sucked into it. This surprises and annoys him, which seems a little disingenuous to me. I mean, if you’re gonna go in for extreme sports like standing really close to a wormhole, then you’ve got to expect that this kind of thing might happen, right? If you ski, you might crash into a tree, if you go to a dance recital, you might be bored, and if you hang out in space next to a wormhole, there’s a pretty good chance you’ll be sucked down into an inter-dimensional outplacement seminar. You pretty much know that going in, and you make your plans accordingly.

Crichton winds up standing on a metaphorical ice floe in the middle of a metaphorical lake. We might as well just get cracking on the symbolism, cause there’s a lot of it to work through. The lake, I think, is supposed to be time. Or else it’s the universe. I don’t know what the ice floe is supposed to be. Fear? Denial? Anyway, the white guy in the suit is there, that’s the important thing, he’s there on the ice floe and he seems to be upset about something.

“Time,” he says, and then waits ten seconds. “Time.” Another pause. “Time.” This is really all he does. “Time.” Crichton makes jokes while he’s doing this, which is amusing and distracting, but the fact is that the white guy just keeps saying “Time,” which isn’t super helpful. Finally he goes on to say “Time is.” I mean, I know they’re trying to drag this conversation out for a whole hour-long episode, so they have a lot of “Time” to kill, but for goodness sakes, if we’re going to have to go through this whole thing one word per minute, then just bring on the hiatus and get it over with. Luckily, Crichton tries to shoot the guy, which perks him up and gets him to take more of an interest in what’s going on. “Time is meaningless,” says the suit, “and yet it is all that exists.” Then he threatens to kill Crichton, which is Crichton’s cue to run through a metaphorical tunnel, right into a metaphorical clip show.

He gets to revisit a bunch of scenes from the last four years, starting with the first episode, which I’m sure would have been exhilirating and fun for me if it hadn’t come just at the right time to remind me that we’re probably not going to get to see how all this ends. The big point of it all is that the wormholes allow for travel through time as well as space, so playing around in your own past can create paradoxes that change the entire universe in unpredictable ways. Crichton knows just enough about wormholes to be dangerous, and if he starts wormhole-jumping without knowing what he’s doing, he might be creating parallel universes.

In order to illustrate this point, we end up in a bunch of those parallel universes, some of which are interesting and some of which, frankly, are just confusing. There’s a universe where the Scarrans have conquered Earth and turned everyone into Scarrans, and that one I get. But what about the universe where Chiana is played by Aeryn? They do a whole series of scenes in Anything Can Happen Day mode, where the actors all switch characters for no apparent reason except, I think, just to distract us and kill a little more Time, Time, Time. In some cases — D’argo playing Jool, for example — it’s really funny, and I don’t care what technobabble they talk about as long as I can watch D’argo pitching a femmy hissy fit, but in other cases — Sikozu playing Stark, for example — it’s just kind of shouty and reminds me that I can’t figure out what the heck is going on.

In other words, I guess, they want to cancel the show.

So this is my interpretation of what’s going on in this episode: The Sci-Fi Channel executive is upset, so he pulls Crichton in through the wormhole for a meeting. The meeting analogy actually works pretty well — the lake represents the conference room, and the ice floe represents the fact that the air conditioner is up too high. Crichton trying to shoot the Sci-Fi executive is not necessarily metaphorical; that kind of thing happens in every network meeting.

The problem, according to the exec, is all about the show’s budget. Farscape is imaginative and cool, and they keep creating new worlds — but every time they do, the show gets more and more expensive. He’s trying to encourage Crichton to keep the budget down to a manageable level — that’s what that whole “destination is key” thing is all about. He sends Crichton back to his own past, showing him reruns to prove that he could do the entire show using flashbacks and sets that already exist. But if he gets too far away from the stuff they’ve already built — going to an “unrealized reality” every single week — then production costs skyrocket, and everything gets out of control, until it all collapses. He wants Crichton to stick to the stuff they already know how to do, and stop experimenting, or else he’s going to have to pull the plug.

Finally, Crichton is convinced — he’s scared, he’ll go back and do his best to keep things under control. The exec is satisfied, and sends him back.

Now, here’s the moment that proves that this interpretation is the only one that makes any sense: The ice floe melts away completely, and Crichton is left standing on the surface of the lake. The lake swirls underneath him, forming a wormhole… and Crichton/Farscape is actually flushed down the drain. I mean, they might as well just hand us the Cliffs Notes if they’re going to make the symbolism that obvious.

So it’s an inspired idea, I think — making the last episode of the summer a symbolic re-enactment of their contract negotiations with the network. Now we have to spend the next few months waiting and worrying, wondering if Crichton will make it, or if the whole Farscape universe will just collapse under its own budget. Now that’s a cliff-hanger.

My Winter with Farscape – Episode 14