My Summer with Farscape – Episode 10 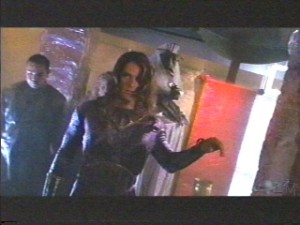 So this, believe it or not, is this week’s premise.

Moya needs a new zyntian filtration system in order to muffle the electrostatic impulses of tormented space. They land on a planet where some mechanics can install the new filtration system, but the crew needs to get examined for Space Madness by a psychotic doctor, who poisons them with Qatal Mollusks in order to sell them an antidote. With me so far?

Now, the Qatal Mollusks, naturally, are infected with dually-linked bacteria, so if the two halves of a mollusk are eaten separately, the bacteria telepathically link the two people who ate them, to force them to “merge” and reunite the bacteria colony. Also whoever ate the mollusks gets really sick and dies. Unless they have the antidote, and that’s kind of a problem.

The problem is that the doctor can only make the antidote by using the same kind of mollusks, and the only source of the mollusks on the whole entire planet is a secret cabal of feminist prostitute freedom fighters who are plotting the violent overthrow of the government from the back room of a military sex club.

In other words: Look how much work it takes just to get Ben Browder to wear a dress for one episode.

I mean, call me old-fashioned, but in my day, if you wanted your main character to wear a dress for an episode, all you had to do was live upstairs from Mr. Roper. These days, you apparently have to reverse-engineer an extremely unlikely biosphere and create a whole feminist freedom-fighter cabal. It’s a lot of work just for one dress.

Still, the lovely thing about this episode is that there’s no pretense at all that this is anything but a Wacky Adventure in Outer Space. Next week is the Summer Finale, and it’s probably going to be really plot-heavy and Important, so I might as well take a moment during this supremely goofy episode and report in on what I’ve learned so far watching Farscape all summer.

So here goes: Farscape is an incredibly goofy show. They twist themselves into pretzels once a week in order to present the latest nutty predicament, which usually involves a death sentence, gastrointestinal distress or spanking Crichton’s ass. This week is a Farscape hat trick, cause they’ve got all three. The game each week is seeing how much nonsense they’ll try to throw at you in order to get there — Magnetic summers! Zyntian filtration systems! Bioengineered telepathic ass-smacking devices!

So, lunatic technobabble plot contrivances are a given, which is fine, cause it’s Wacky Adventures in Outer Space, and you expect that sort of thing. They do the same thing on hospital shows. (Does anyone really think that there’s such a thing as “10 cc’s” of something? They just make that shit up to impress us.)

The secret, I think, to enjoying Farscape is that you’re not supposed to pay any attention to the technology, the biology, the politics or pretty much anything that anyone ever says. Everyone talks nonstop on Farscape, and it doesn’t mean anything; it’s a lot more fun if you just think of all the exposition as verbal set decoration, like the blinking lights on a bank of computers in 50’s B-movies. It’s just there to distract you while you’re waiting for a monster to tear the lady’s clothes off.

So the difference between a good Farscape episode and a bad Farscape episode is that the good episodes are Fast and the bad episodes are Slow. This week is a good episode because everybody wears nice clothes, they jump up on tables and knock things over a lot, and all the unpleasant people get kicked in the face at the end. Last week was a bad episode because everybody was hairy and slimy, they all stood around and made boring speeches, and I was expected to care about which group of dull people finally won whatever it was they were all squabbling over.

I say, don’t bother explaining it all to me, just take off your clothes and shoot something! And usually they do. What a fun summer I’ve had so far.

My Summer with Farscape – Episode 3

My Summer with Farscape – Episode 4

My Summer with Farscape – Episode 11

My Winter with Farscape – Episode 18