How I Spent My Summer Vacation by Danny Horn. I am, on the whole, not a very good summertime decision-maker. That’s why, instead of going outside, I’m going to spend my summer watching sweaty people shout at each other while they run up and down dark corridors. I’m also going to be watching the fourth season of Farscape. (Bada bing! That’s the kind of joke you can expect pretty much all summer long.)

To make things more interesting, I haven’t watched a single episode of Farscape since half past the first season, although my partner Ed watched most of season 3, so I’ve absorbed some of the main plot points through relationship osmosis. (Moya’s dead, right? Or the other one is dead. Something’s dead.) So I’m going to see if it’s possible to start watching the show now, and still make heads or tails of it.

And to make it even more challenging, my brain can’t tolerate translator microbes. Make sentences! Nouns! Verbs! Surf’s up… 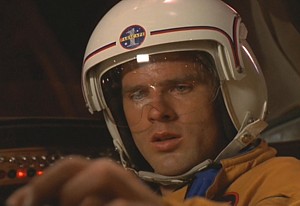 Okay, as far as I can make out, the story so far is basically Home Alone, where Mom and Dad go off to Europe and they forget to bring Crichton. They leave him at home, where he drinks, plays music really loud, and knocks together complex devices using stuff he’s found lying around the house. Except the house is a dying Leviathan ship, so everything’s all dark and moist and dry-icey.

Then a ship crash-lands and a space babe comes out, so maybe this is more like Risky Business. The space babe looks like a red-headed Bjork, and I don’t really have any other choice than to call her Bjork this week, because if they actually said her real name during the whole episode, then I must have thought they were talking about something else, cause I didn’t hear it. Crichton calls everybody by nicknames, which doesn’t help. This is actually an issue for me, responsible journalismwise — I can’t understand what any of the characters say on this show. The only character who speaks American is Crichton, who talks in a kind of rapid-fire pop-culture code, so every time I try to lock phasers on the lingua franca, he starts Babel-fishing, and it’s no hablo Ricardo, ya got me?

Anyway, Bjork seems to have the same problem, cause she tells Crichton that she needs to learn his language by listening to him name random objects in the room. I’m serious. She says, “My brain can not tolerate translator microbes,” and then she points at a box and asks him what it’s called. Turns out he calls it a box, so that’ll save some time. He sings the alphabet to her, which is supposed to be helpful, and then she screams, “Make sentences! Nouns! Verbs!” At which point he launches into a tirade about how he’s been working like a mofo until she came in and pissed him off, and from then on she can understand English.

Um, qu’est-ce que c’est what now? I don’t know what theory of language acquisition they’re working from here, but according to this model, I could have blown off four years of memorizing irregular verbs in Spanish class and just watched telenovelas for a couple hours.

But there’s no more time for the zero-to-sixty Berlitz course, cause then some Grudex crash-land on the ship. The Grudex are a bunch of hairy guys who look like Yosemite Sam and talk like Boris Badenov, so you know they’re the bad guys. (Sticking with the Home Alone analogy, these guys are Joe Pesci and Daniel Stern.) “Ve vill climb two levels higher and beegin zearching anew!” they say, and so there you have it. Bjork does a bunch of exposition about how the Boris Badenov guys are harvesting beechwood-aged Leviathan neural cluster tissue — ya know, for a girl who just learned English two minutes ago, she’s quite the chatterbox — and then the BB guys release the Blenders Hound. Or maybe it’s the Bladders Hound, it’s hard to say. Anyway, it’s a mean dog thing that zips around and cuts Bjork’s hand off, except it doesn’t eat the hand. It just kind of slices it off and leaves it on the ground. Apparently the Blenders Hound is kind of a canine weed whacker. Which is a good thing, cause if Bjork can get her hand back, she can “rebond” with it and be good as new, and I don’t care where you’re from, that is a damn good party trick. She should sell tickets and take that on the road.

Then Rygel and Chiana show up, just in time to get Bjork’s hand back and complain about how dangerous the Boris Badenov guys are. Chiana’s acting fidgety, so Crichton shoves her up against the wall and asks her what her deal is. “You know the visions I’ve been having?” she says. “They’ve evolved.” She got tortured at a casino — I don’t know if this is last season or over the summer or what — and now instead of seeing the future, “I see the present, only it’s just all… it slows down.” Don’t blame me, that’s what she says. She’s making sentences, nouns, verbs, the whole deal. I just can’t figure out what she’s going on about.

Anyway, they get Bjork’s hand back and they find her plotting with the bad guys to keel moose and sqvirrel. They tell her that’s not a great idea, and then they all work together to concoct a scheme to kill the Blenders Hound. The plan involves rope and an electrostatic membrane, but mostly it’s about Crichton shaking his leather-clad booty, shouting, “Come ON, come ON! Ya want some of THIS? Yeah! Yeah!” I’m serious, he really does this. Then he rubs his ass and says, “Grade A prime American beef! Come ON, damn you! You KNOW you want some of THIS! Right here! Right HERE! Right NOW!”

… I’m sorry. What were we talking about?

Oh, right, the Home Alone thing. Well, all the little schemes pretty much come together at this point. They rig up a pulley system using ropes and… well, I don’t have to tell you how to rig up a homemade pulley system, do I? Everyone knows how to do that. Chiana uses her “seeing the present but it slows down” trick to figure out which bits of wire to shoot, and Crichton shoots the right bits of wire, and something blows up, and the Boris Badenov guys die, and Bjork’s hand falls off again. This is about all I could make of the ending cause I kept getting distracted by that grade A beef stuff. I mean, MAN! Anyway.

At the end, Bjork decides to stay with Crichton and the gang, cause everyone else is dead and she doesn’t have anything else to do. Crichton starts painting wormhole equations on the wall, and that’s about as close to a happy ending as we get on this show. Come back next week for more running and shouting.