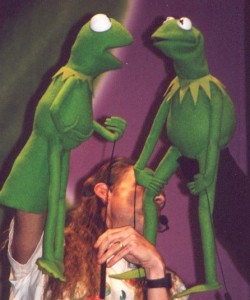 Next up is the Kermit’s Swamp Years panel, so now I get to put on my Brenda Starr-Lois Lane hat and report some real news. They show the teaser trailer for the new Swamp Years video, and then they basically bring out the entire production staff to talk about it.

So here’s what we learned from this panel. Stop me if I get too CountingDown.com on you.

Kermit’s Swamp Years is the new direct-to-video Muppet movie, coming out in late summer/early fall 2002. It’s the story of Kermit at age 12, first learning about the world outside his swamp. Kermit’s got two frog friends, Goggles and Croaker, and they’re menaced by humans who are stealing frogs from the swamp for dissection. Goggles gets frognapped by the dissectors, so it’s up to Kermit and Croaker to leave the swamp, travel to the big city and rescue their friend.

And, by the way — it looks great. We got to see the trailer and a rough cut of one of the action scenes, and so far it looks like fun. The Young Kermit has a very high “awwww” factor. To put it bluntly, he’s adorable, and you’re gonna want a Young Kermit doll. Goggles is played by Joey Mazzarino; Croaker by Bill Barretta. John Kennedy plays Blodge, a big mean toad that menaces the frogs. The clips we saw looked funny and energetic, and the exterior shots (filmed in real Florida swamps) were fantastic.

And here’s some good news for us all — They actually care about making a film that the fans are going to like. Writer Jim Lewis promises, “There are lots of little easter eggs throughout for the fans.” He didn’t want to spoil any of the surprises, but one fan-fave detail that snuck out was that KSY includes an appearance by Arnie the Alligator, who chased Dom deLuise out of the swamp at the beginning of The Muppet Movie.

“This is actually Kermit’s Swamp Years: Episode IV,” Jim says. “We’re gonna go back… The next one is actually called The Search for Nanny’s Head.”

You see? This stuff is in good hands. Even Steve Whitmire is happy with it. He said he was pleased with the idea of exploring Kermit’s character, saying, “I’ve tried to not let him just become a corporate icon.” After a while, he just started gushing about the film: “It feels more like The Muppet Movie than anything we’ve done since Jim passed away. A really good feeling. I’m SO excited about it!”

Me too. Principal photography finished before Thanksgiving, and now it’s being edited for a summer release. An audience member asked about a sequel, and Jim’s response was: “From your mouth to God’s ear… We’d love to. These are a rich group of characters. If it does well, we could do many more. It’s kind of like DC Comics’ Elseworlds — a whole mythology all to itself. It’s a fun place to go.”

So there you have it. Once again, I was really impressed with the passion and energy that these folks have for working with the Muppets. They’re not just Hollywood hacks squeezing out another direct-to-video sequel. They’re not exploiting the franchise; they’re expanding it, making it bigger and deeper. They’re on the right track. Now buy the video so they keep making more.

My Week with MuppetFest, Day 2 Part 1: The Muppet Salute

My Week with MuppetFest, Day 2 Part 1: The Muppet Salute

My Week with MuppetFest, Day 2 Part 2: Welcome to Hoboken