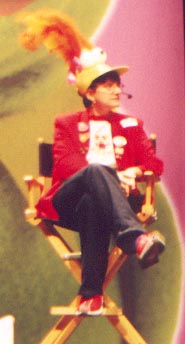 Next up: Jerry Nelson, Kevin Clash and Bill Barretta singing Muppet Music with the live band. It’s a shame that this segment had to be so short; it’s only three songs, but it deserved a lot longer. For once, we actually get to see the Muppeteers acting, without puppets, and Jerry Nelson is just incredible. He riffs and scats his way through “Mahna Mahna,” then looks around with actual bewilderment and embarrassment on his face. During “Mississippi Mud,” Jerry is the only one that doesn’t need to look at the lyrics. “You were incredible on that,” Bill says. “No, you were,” Jerry says. “I was listening.” They’re so adorable. Jerry gets a spot next to Dave on my Best Performers of the Day list.

Then there’s the Fraggle Rock panel, and producer Martin Baker introduces Karen Prell. Karen bounds out on stage, dressed in a bright red jacket. She whips out a camera and takes a photo of the cheering crowd. Then she sits on her chair and pulls out a hat that has Red’s hair, eyes and nose on it. She beams, “I can out-geek all of you guys!” She can, too. It’s fantastic. We love her. She’s a fan like us, but she gets the chance to sit on stage and be a Muppeteer. In one of the panels on Sunday, Karen tells a story about Richard Hunt sitting and reading a newspaper on the set of The Muppet Show, still wearing Sweetums’ legs. She mentions that we may remember seeing a picture of that in the Of Muppets and Men book. Everyone else on stage gives her a blank look. It’s a cool moment for the fans — Karen’s memorized Of Muppets and Men, just like we have!

In fact, Karen is so happy and warm and loving on stage that at dinner, Kynan and I decide to spread the rumor that she’s incredibly mean in person. We tell people that on the autograph line, Karen kicked Kynan under the table, then poked him in the eyes with her Red hat. And then later, we saw her biting the heads off Doozers and just throwing them away. It was horrible. Nobody has any idea what we’re talking about. Anyway, her new name is Karen “Ice Queen” Prell. Pass it on.

Meanwhile, back in reality. The Fraggle Rock panel seems to be something of a turning point for the con. Up to now, the Henson folks on stage have been very funny and enthusiastic, but they’ve seemed kind of uncomfortable, like they’re not quite sure how much to reveal about themselves. But in the Fraggle Rock panel, they all get really passionate about how much they loved working on “Fraggles.” Dave says: “Fraggles, for some reason, had more meaning than everything else. It was always about something. We’re all sad that that’s over. We’d all jump at the chance to do something with the Fraggles again. Maybe not a five-year series again, but something.” Jerry agrees that there was something special about Fraggles: “We were all on a quest for quality. We knew if we were upset with something and let it go by, Jim would be unhappy. And we didn’t want that to happen.”

After a while, the people on the Fraggle panel stop talking to the audience, and just start talking to each other. It’s the first time all day that it feels like we’re eavesdropping on a real conversation. They’re all so earnest and engaged when they talk about how great Fraggle Rock was, and how much they believed in it. It’s beautiful, and I think Karen’s enthusiasm is the key. At one point, she just blurts out: “Okay, quick survey — If all the Fraggle Rock episodes came out on DVD, who would buy them?” There’s a heartfelt smattering of applause, and Jerry shrugs, “Well, there’s five sold.” Karen is the most open about her love for the Fraggles, but it’s obvious that on some level, she’s personifying the love and passion they all had for the show.

And from then on, the con gets even better. The panels get more enthusiastic, the performers get more revealing and intimate. It’s like Karen makes it okay for them to love doing this. She’s fantastic. If she would just stop biting the heads off Doozers, she’d be perfect.

My Week with MuppetFest, Day 2 Part 4: Get Outta Johnny Fiama!

My Week with MuppetFest, Day 3 Part 1: How Conventions Work

My Week with MuppetFest, Day 3 Part 3: A Lesson for Everyone