My Week with The Muppet Show: Week Two, Day Five 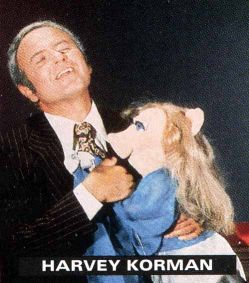 So they’re funny, these Muppets. I think we’ve established that. They’re wild, they’re creative, and they’ve got plenty of ideas for their new show. The problem that they’re having is that they don’t quite know what to do with the guest stars.

When it’s just Muppets, everything’s fine. Today’s episode starts out with an explosive Dr. Teeth and the Electric Mayhem number, so you know that’s all right. Then Kermit does a little on-stage talk spot with Animal, introducing the Muppet drummer to everyone. “Why don’t you tell our audience how long you’ve been playing the drums?” Kermit asks. Animal thinks, and beats his head on the drum. One… two… three… four… five. “Five years,” says Kermit. This is good stuff. This is the kind of stuff you turned on The Muppet Show to see.

And then there’s Harvey Korman‘s comedy spot. Kermit introduces “Maurice the Magnificent” and his trained animal act. Harvey plays Maurice, a nasty circus performer with a top hat and a thin little villain mustache. Maurice warns the audience not to scream when his animal comes out of the cage — loud noises drive it berzerk. He wiggles his villain mustache and cracks his whip. “OUT!” he screams. “OUT, you demon! OUT!” The monster emerges from the cage — and it’s Thog, a huge, gentle powder-blue monster with droopy sad eyes.

Maurice screams and snarls, but Thog gets all the laughs. Maurice orders him to speak, and Thog shrugs: “I hardly know where to begin. I was re-reading Balzac the other day… only in translation…” Maurice shouts for silence, and cracks his whip. “You’re very good with that whip, Morris,” Thog says. Maurice orders the monster to dance, and Thog obeys with a few shuffled dance steps. “This is really an easy trick,” he explains. “I wanted to ride a pony around the stage, but Morris is afraid of ponies.” He ends up dancing with Maurice, then spins him into the cage and mugs for applause.

It’s amazing. Harvey Korman is an old comedy pro, and he’s in red-alert full-speed-ahead scenery-chewing DANCE-you-demon-DANCE mode. Then Thog just waltzes in and steals the scene out from under him, and he makes it look easy.

And maybe it is easy, cause then a couple of dogs do it. Harvey’s backstage, and he’s approached by Rowlf and Muppy. Rowlf tells him that they’ve been worried about ecology. Harvey says that he’s in the middle of a show, he doesn’t have time to think about ecology. “That’s easy for you,” Rowlf says, “but if all those trees go, we’re in big trouble!”

It just don’t add up. They’ve got Harvey Korman as a guest star, but they don’t give him any of the punchlines. Harvey can’t sing or dance, so it seems like they don’t quite know what to do with him. The thing he does best is play silly characters and tell jokes, but they’ve already got silly characters who tell jokes. So why bother dragging poor Harvey onstage just to have him play the straight man?

In the second half, Harvey complains to Kermit that he’s the “token person” on the show — he feels strange being the only human around with all the dogs and frogs and pigs and chickens. The Muppets all rush onstage and put him in a big chicken suit, and then they pretty much just forget about him for the rest of the show.

Which is just as well, because then Fozzie does his comedy act, enlisting Kermit to help him with the punchline. The gag is that when Fozzie says the word “hear,” Kermit’s supposed to run out on stage and yell, “Good grief, the comedian’s a bear!” But not the first time Fozzie says “hear.” And not the second time, either. Kermit keeps running out and saying “Good grief, the comedian’s a bear!” and they get mad at each other, and I can’t really explain it, but it’s an amazing double-team comedy performance. And then Harvey comes out in the chicken suit.

To close the show, Robin the Frog sits on a staircase and sings “Halfway Down the Stairs.” It’s a great number, really lovely and innocent, but it’s not so much a closing number. The rest of the episode hasn’t really built to anything, and there hasn’t been much of a plot. The episode doesn’t have an ending; it just goes for half an hour, and then it stops.

And that’s about it. Kind of an anti-climax for the week, really. Would it help if I brought out Harvey in the chicken suit again?