My Week with The Muppet Show: Week Two, Day Four 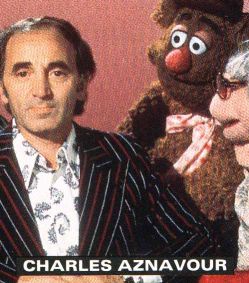 But we’re not going to talk about him today. Today, we’re going to answer the question, “What is Man’s Role in the Universe?” Kermit is moderating the discussion panel sketch, with the distinguished panel of Sam the Eagle, Gonzo the Great, Hilda the wardrobe lady, and Mildred Hocksteader, MA, PhD, OBE and RSVP.

Now, this may not seem like a blockbuster panel to you. But for one of these first-season discussion panels, this is like the Night of a Thousand Stars. They’ve done a bunch of these sketches so far, and all the others included Kermit, the guest star, maybe one main character like Piggy or Sam, and then a couple of no-name pigs or humans. This is the first time they’ve actually done a discussion panel with five main characters. (And yes, for the first season, Hilda and Mildred qualify as main characters.) So here’s Jim Henson, Frank Oz, Dave Goelz, Richard Hunt and Eren Ozker going at it for a few minutes.

Gonzo isn’t sure how to answer the question of Man’s Role in the Universe. Hilda says that this discussion is above his head, and maybe he should keep it down. “Check!” says Gonzo, and puts his head down. Sam corrects him: “She didn’t mean keep your head down! You take things too literally.” (Cue the running gag.) Kermit says they don’t have much time, so they’d better get hopping. Gonzo starts hopping. Sam turns to Kermit: “Who are these weird people?” Kermit says not to pay any attention.

Sam tries to move on. “All right. I suggest we look carefully at what’s before us, and break it down into separate pieces.” Check, says Gonzo, as he whips out a huge mallet and starts breaking the table with it. They stop him, and tell him that they’re looking for the answer. He looks under the table.

Gonzo still can’t find the answers under the table. “Will you knock it off?” Sam snaps. “Knock it off?” says Gonzo, as he takes his mallet and knocks Sam’s hand off the table. Everyone is squabbling and yelling at each other as Kermit announces, “Join us next week when our distinguished panel answers the question: What are we doing here?”

What are you doing here? You’re running amuck, that’s what you’re doing. Who needs French people?

My Week with The Muppet Show: Week Four, Day One