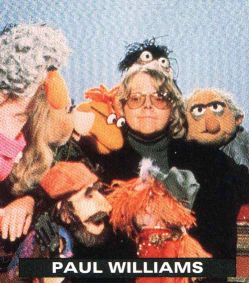 Phew. The last couple days have been pretty rough around the Tough Pigs office. That Jim Nabors-Florence Henderson one-two punch kind of took it out of us. Just this morning, my secretary Jason noticed that I was feeling a little down. He asked me if I wanted him to go for coffee, and I just snapped: “What, does your uncle own the theater now?” I felt bad about it, of course. But it just kind of hit a nerve.

Anyway, to make it up to him, we watched the Paul Williams episode today. The opening number is “All of Me,” with a furry pink monster singing to another monster holding a box. “All of me,” he sings, “Why not take all of me? Can’t you see, I’m no good without you?” He reaches up to his mouth: “Take my lips, I want to lose them…” — and then he rips his lips right off his face, and sticks them in the box. “Take my arms, I’ll never use them…” His arms come off, and he keeps on singing. “Your goodbye left me with eyes that cry — here, take them too!” As he goes on, he ends up giving away every part of his body. “Hey, you want my hair? Well, hair it is!” He just goes to pieces, still singing until every piece of him is in the box. It’s a weird, original take on the song — unsettling, yes, but high-spirited and really funny. I can see Jason starting to perk up a bit.

The next number is really fun, too. Paul is sitting alone in a room by a rainy window, singing “Just An Old-Fashioned Love Song” — a melancholy tune about hearing a song on the radio and remembering an old love affair. Then, as the chorus starts, the prop radio opens — and a Muppet version of Paul pops out, doing a jumpy harmony with Paul. As the chorus ends, the Muppet Paul darts back into the radio, which slams shut again. Paul sings another verse — and for the next chorus, two Muppet Pauls jump out and harmonize. The Muppet Pauls are dancing around in sync with each other, really getting into it. Paul picks up a little ukelele, and soon a whole Muppet jug band is piling out of the radio, turning the sad tune into a cheerful anthem. The room is filled with Muppets, dancing and singing and playing the trumpet. At the end of the song, all the Muppets pop back into the radio, leaving Paul onstage.

Now we’re having fun again. And mostly, it’s because the people making the show are obviously enjoying themselves. In the last couple episodes, it felt like the producers had something to prove. They were trying to show that they could create funny characters and situations, and make the show work, and the episodes showed some strain. They repeated the same shtick again and again in the last couple episodes — Scooter saying that his uncle owns the theater, Piggy jumping on Kermit. But now it feels like they’re relaxing and enjoying themselves. This episode pops from one creative idea to the next, never resting for a minute.

What they’re figuring out here is that The Muppet Show isn’t just a regular comedy-variety show that happens to star a frog and a bear. They can do stuff with these puppets that a regular show wouldn’t be able to do. So the monster can take himself apart in “All of Me,” and Paul can harmonize with himself in “Love Song.” Then Dr. Bunsen Honeydew appears, demonstrating Muppet Labs’ All-Purpose Tenderizer — which turns a dish into a soft piece of foam. In another scene, Paul gloats that for once he’s the tallest person on the show — but then some eight-foot Muppet monsters come by to make him feel small again.

In another sketch, Paul plays a travel agent. A monster enters, and says he wants to go to Pittsburgh — but every suggestion Paul makes is met with: “Got anything cheaper?” Paul keeps trying to go cheaper — from jet to prop plane to broken-down bus — but the monster keeps insisting, “Got anything cheaper?” Finally, Paul pulls a lever on the wall, and a 5000 pound weight falls on the monster. Paul picks up the remains — a squashed circle of blue felt with a face — and mails it to Pittsburgh.

Squash them, stretch them, pull them apart: Muppets can do anything. And, best of all — they’re enjoying it.

My Week with The Muppet Show: Week One, Day One

My Week with The Muppet Show: Week Two, Day Two

My Week with The Muppet Show: Week Three, Day Five

My Week with The Muppet Show: Week Four, Day Five