My Week with The Muppet Show: Week Two, Part One 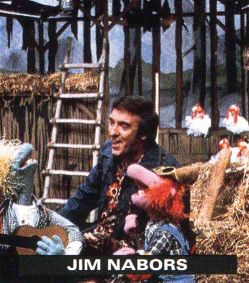 Welcome back to My Week with The Muppet Show — my foolhardy, desperate cry for attention where I watch every single episode of The Muppet Show in production order and write a commentary on every single one. This is the start of Week #2, so I’m still only a bit into Season 1. If this were Survivor, then this would be the part where I’m looking around and going, hey, where’s the food? And what do you mean I have to build my own shelter?

Okay, so maybe the Survivor analogy doesn’t hold up. I mean, all I’m doing is watching The Muppet Show, right? It’s not like I have to make fire. I love this show. All I have to do is sit right down and watch another episode.

Although I think it’s possible that spending a half hour looking for food under rocks is actually more enjoyable than spending a half hour watching Jim Nabors. I’m not going to go into it in detail, because it just makes me depressed. Suffice it to say that the appeal of Jim Nabors eludes me. He pulls faces, he mugs at the camera, he insists on speaking in the Gomer Pyle voice. Another half-hour of him, and living on cornmeal for a month would look like a party.

This is the episode that introduces Scooter, and basically we’ve got everything in the first two minutes that Scooter is gonna do for the next five years. He walks up to Kermit and tells him, “I’m your new gofer. I’ll go fer coffee, I’ll go fer sandwiches, I’ll go fer anything you need… I’ll start tonight, okay?” Kermit walks away: “Listen, kid, I’m sorry, but you’re too young, you don’t have any experience, and I don’t have any money for it in the budget.” Scooter: “Yeah… My uncle owns this theater.” Kermit: “Uh… you start today, get me a cup of coffee, your salary is twenty a week.” Scooter says his uncle will be really disappointed if he doesn’t get twenty-five. Kermit: “How about thirty?”

Scooter looks surprised — and that right there is the thing that makes Scooter work. There’s a very delicate balance going on in this scene. Every time Scooter mentions his uncle, he looks away, as if he doesn’t quite realize that he’s pressuring Kermit. There’s a kind of guileless innocence to Scooter. He’s getting his job through nepotism — and obviously he can get pretty much anything he wants — but what he’s asking for is the lowest entry-level job in the theater. He doesn’t push his way on stage, and he seems genuinely interested in working for Kermit. He actually seems to enjoy being there, which is the thing that saves him from being an abrasive villain character.

Unfortunately, he only has one shtick, and this is it. Scooter meets George the janitor, who complains about the new guy who bought the theater: “The roof leaks, the seats are torn, the furnace is on the fritz… I tell you, he is the WORST!” He’s my uncle. “He is the BEST!”

And that’s about it. Scooter follows everyone around through the whole episode — spilling coffee on Kermit, giving Fozzie bad jokes for his act. The episode is obviously meant to showcase Scooter, but it doesn’t really establish much of a character. After a whole episode, we have an attitude, and we have a running gag — but Scooter doesn’t seem to want anything other than to follow people around and be enthusiastic.

It’s like the writers know how to establish a character’s voice — Gonzo is depressed, Fozzie is clueless, Scooter is hyper — but they don’t quite know what to do after that. It’s a good start, but there’s still a ways to go in order to make them into real characters.

At the end of the show, Jim tells Kermit that Scooter was really helpful — he picked up his coffee and his wardrobe. “I even picked up his accent!” Scooter chirps. “Well, Go-oh-oh-lly!” Kermit: “Make sure he doesn’t try to pick up your paycheck.” Scooter: “I’m shocked!” Fozzie pops up: “I’m Fozzie!” And Piggy: “I’m Piggy!” And Animal: “I’m Animal!” Kermit: “Well, I’m saying good night. We’ll see you next time on The Muppet Show!”

Oooh. Ouch. Let’s not do THAT again. Pass the cornmeal.

My Week with The Muppet Show: Week One, Day Two