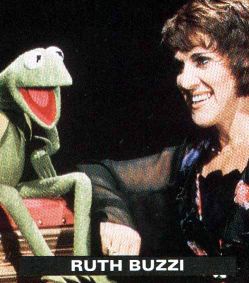 Well — yes, actually. There is something that these puppets can’t do yet, at least in the Ruth Buzzi episode: they can’t quite figure out how to tell a story.

Scooter’s got a big crate backstage, which he tells Kermit is a gift from his uncle. They open the crate — and find a mechanical wind-up Kermit, who’s there to take the bona fide frog’s place as host. Kermit is nonplussed. Kermit and the robot do a cute “mirror act” backstage, and the robot taunts Kermit that Scooter’s uncle wants him around.

But then it’s time for some music. Wayne and Wanda sing “Row Row Row,” as their boat sinks. Then Ruth Buzzi, in medieval clothes, serves food to Sweetums, who apparently is her violent monster husband. She sings “Can’t Take My Eyes Off of You,” and they have a comic dance routine. She ends up smacking Sweetums around, and finally hits him over the head with a chair. “That my kind of woman!” Sweetums sighs. Then Rowlf sings “I Never Harmed an Onion.”

Fozzie does his stand-up act, with Statler and Waldorf heckling. Fozzie announces, “You’re in for a real treat!” Waldorf: “You mean you’re finished?” Fozzie: “Who’s doing this show? You or me?” Statler: “Well, we’re getting all the laughs!”

This is all really funny stuff. But wasn’t there a mechanical Kermit around here somewhere?

The individual parts of this episode are all really great. It’s fun to watch, and the episode moves quickly from one piece to the next. But I definitely get the feeling that it’s a lot of individual scenes stitched together, rather than a coherent whole.

In the next sketch, Ruth Buzzi plays a prisoner of war, being interrogated by a Frackle and a Whatnot. The Frackle threatens her: “Give us the information, or we have ways of making you talk!” She starts chattering away, giving them all the information they need, but then she goes on, telling them everything she knows… including the marital status of each of the commanding officers, their hobbies, their personal problems… “We have ways of making you stop talking!” the Frackle cries. It’s a funny piece, with a strong punchline. But it doesn’t really feel connected to anything. Kermit hasn’t introduced it; we haven’t seen anything backstage that leads up to it.

This episode actually has a sort of Monty Python feel to it. There aren’t really any connections between the sketches, and there doesn’t have to be an explanation for why Ruth transforms from a medieval wife to a prisoner of war to an exercise guru. It seems like the producers haven’t quite figured out how to tie everything together yet.

Back to the robot Kermit, who is apparently lurking around backstage. Miss Piggy flirts with the real Kermit, who dismisses her and goes onstage to do an introduction. She sweeps into her dressing room, crying, “Oh! How I long to hear my love whisper… sweet passion…” And there, in the dressing room, is Kermit. “Hiya, good looking! How about you and me getting together and making steam heat, huh, snugglebunnies?” Piggy is stunned. This is the wind-up Kermit, of course, and he puts the moves on the pig. He whispers “sweet nothings” in her ear. She’s ecstatic — but as he goes on, she gets more and more disgusted by what he’s whispering. The real Kermit comes back in just in time to get karate-chopped — and then Piggy sees the second Kermit, and she faints. It’s a great scene — and, by the way, the first significant backstage-romance scene between Kermit and Piggy.

It’s a shame that the producers used the robot frog idea so early in the season, because it seems like he’s wasted here. Later on in the series, a mechanical Kermit would have been integrated into the entire episode, and there would have been more of a story. The robot certainly would have been “onstage” for more than just a couple of lines. I can imagine a big closing production number where the robot Kermit appears in the real Kermit’s place, and messes everything up.

But at this point in the show, onstage and backstage are still very separate. There’s a big funny wind-up plot device running around backstage… but onstage,everything is going on as normal. This is the last major piece of the format that they need to figure out. Once that robot can cross the boundary from backstage to onstage… then the show can really start clicking.