Today: Episode 2 — “Wembley and the Gorgs”

The first two episodes of Fraggle Rock were written by Jerry Juhl, who has essentially become a saint to Muppet fans on account of everything that he ever wrote was really really good, and he never wrote anything bad that we ever heard of. We all love Jerry so much that we don’t even blame him for Muppets From Space. (I heard it got messed up in the editing.)

One thing Jerry’s known for is his sharp character writing, and here’s a good example:

Gobo: First up to get the mail, now out to the Gorgs’ garden… It’s turning out to be a dangerous day.
Wembley: Yeah, but we love it, don’t we, Gobo?
Gobo: Well, to tell you the truth, Wembley, sometimes I get sick of it.
Wembley: Yeah, me too.
Gobo: … You sure do like to agree with a person.
Wembley: Oh, I gotta agree with that! Heh. 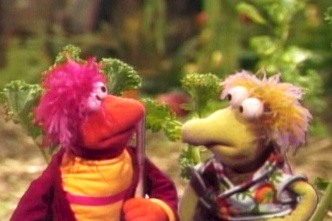 And there you have it. That’s Wembley. In six lines, you get his whole character: his indecision, his affability, his attachment to Gobo, and his willingness to try anything. That’s economical writing. Plus, it’s funny, so it’s got that going for it too.

In the next scene, we get introduced to all the Gorgs, with exactly the same kind of perfect character sketch.

Pa Gorg: Why are there never any loyal subjects at the palace gates, bowing and groveling?
Ma Gorg: Has it ever occurred to you that we don’t have any loyal subjects?
Pa: Ahh… sometimes it gets lonely. Especially if you’re the King and Queen of the Universe, like us.

Then Pa finds Junior standing on a crate setting up a Fraggle trap. Pa pushes Junior, and Junior falls on his butt with a satisfying crash. Pa orders Junior to plant the radish sprouts, and Junior makes a cute little frustrated grunt. And that is pretty much the Gorgs in a nutshell for the next five years.

The Gorgs are wonderful. I’m just going to state that as a fact because there are no two ways around it. The eyes, the movement of the body, the voices. They’re wonderful. Unlike the Doozers, I actually pretty much understand the basic tech behind the Gorgs, but you don’t even notice it when you’re watching them. The Gorgs are real.

Anyway, enough gushing, and on with the show. Junior catches Wembley, and all the other Fraggles are upset, so naturally they sing a song to psyche themselves up to go and rescue him. Like all good musicals, they’re using the song to highlight a story point, making the moment feel important. It’s not just “hey, let’s go find Wembley.” It feels like a major rescue operation, and it’s all thanks to the stirring tune.

Meanwhile, Wembley is making friends with the Gorgs. Like the innocent that he is, when the Gorgs say that they’re the King and Queen of the Universe, he believes in them completely. He cheers for the king, and sings for them. They’ve never met a loyal subject before, and they’re completely charmed by him.

The other Fraggles arrive to rescue Wembley, but they’re all captured and put in a cage. Gobo pokes Pa Gorg in the nose, and they’re labeled “enemy Fraggles.” Junior wants to thump them, but Wembley says that they can’t be punished without a fair trial. The Gorgs get all excited by this, and they rush inside. Gobo tells Wembley to open the cage, but Wembley says it’s okay: They’re getting a fair trial!

When the Gorgs all come out in judges’ robes, that’s the moment when you realize that something very different is happening in this episode — something that we’ve never seen before on a puppet show. This isn’t just a simple story of a character getting captured by villains and getting rescued, it’s something bigger than that.

The Gorgs ask Wembley if the other Fraggles deserve to be thumped, and he delivers an impassioned speech on their behalf, talking about all their special individual talents. “They don’t deserve thumping. They deserve good stuff! They deserve to live.”

The Gorgs are moved by his speech, so the Fraggles won’t get thumped. Pa laughs: “Let’s keep them instead, as slaves! They’ll bow, and they’ll curtsey, and they’ll grovel whenever we want ’em to, just like this little one does!” Wembley is horrified, and bites Pa on the nose, letting all the Fraggles escape in the confusion.

Back in Gobo and Wembley’s room, Wembley reflects on his experience: “It didn’t seem like I was a slave. I guess some slavery feels like freedom. I didn’t notice what they were doing to me, until… well, until they tried to do it to you.” Gobo comforts him: “Well, that’s good, Wembley. Know who your friends are.” And that’s the end of the episode.

And you have to admit that that is pretty remarkable. A puppet show, for kids, and the pro-social message of the day is: “Some slavery feels like freedom.” Now, as far as I recall, the take-home messages from other shows of the period were things like “Don’t tell lies” and “Eat healthy food.” So this complicated little reflection on slavery and freedom… it just blows me away. Plus, it’s only episode two, which makes you wonder what they have planned for the rest of the season.

As the show goes on, the Gorgs get more sympathetic — especially Junior, who emerges as a real hero — but here at the beginning of the series, the Gorgs essentially represent the unfair use of power. The Gorgs are the Big People — the people in the world who can do anything they want because they’re rich, or powerful, or because they have the guns. The Gorgs think that they rule the whole universe, just because they happen to be bigger than everybody else.

But they’re not good at being in charge, because they have no real respect for the creatures that they’re supposedly “ruling.” They expect to be served and flattered, but they don’t give anything back. They don’t protect the smaller creatures or take care of them, and it doesn’t even occur to them that the “little people” have their own dreams. The Gorgs may be big, but they’re parasites; their idea of “leading” is to live off the work of people who are smaller and weaker than they are.

In 1983, somebody watching this episode might use that metaphor to think about what was happening in South Africa, when it seemed like apartheid might never end. They also might think about Reagan’s America, when the gap between the upper class and everyone else was obviously widening.

These days, there’s some useful echoes in this episode if you think about America’s role as the strongest power in the world. When America invades Afghanistan and Iraq, are we rescuing innocent Fraggles from the parasitic Gorgs ruling those countries? Or are we acting like Gorgs ourselves?

Hey. Just a second. You just started thinking about that question, didn’t you? You were reading that last sentence, and you took a moment to ask yourself: Is America acting like a Gorg?

That’s the power of a good metaphor. A metaphor is a problem solving tool; it helps you to think about a complicated problem in a new way. This episode is an example of why Fraggle Rock can be more than just a series of life lessons for kids — if this is a useful metaphor for kids, then adults can also use it, for adult problems.

The Gorgs might be the bullies at school, but they might also be a mean boss, or an abusive boyfriend, or the Taliban. It’s a good thing we have Fraggle Rock, to help us figure it out. For all we know, there might be Gorgs everywhere. 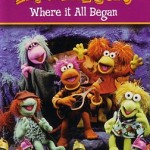