Well, wouldn’t you know it! All this time, we’ve been saying that Henson should put out Fraggle Rock DVD’s, and all this time, they’ve been acting like putting out Fraggle Rock DVD’s was just the hardest thing in the world. Oh, we couldn’t possibly! they’d say, putting up their feet on the desk. In this weather? Don’t be a fool. We’d have to go up to the attic and dig through all the boxes just to find the things, and then we’d have to drag them downstairs, dust them off, digitize them, rejigger the video transfer and cross-fade the mono tracks. Then we’d have to put them on DVD’s, and after all that work, who’d buy them? You, and your six sad little friends, that’s who. It’s hardly even worth getting up for, they’d sigh, and then they’d put their heads down for a long nap. Poor dears, we really worked them to the bone, didn’t we? No wonder they looked so tired all the time.

And then, just as they were settling in and really getting used to never making any money ever again in their lives, the company ran into some kind of mysterious financial trouble. I blame evil spirits, personally, either evil spirits or street gangs.

So, strapped for cash, Henson sold off the Muppets, and they licensed what was left of their library to HIT Entertainment, and now, hey presto: Fraggle Rock on DVD. Turns out it wasn’t so hard after all! And who’s buying it? Me, and my five sad little friends. (One of them got bored waiting, and went off to become a Tobey Maguire fan.)

Anyway, now that they’ve finally gone to the trouble of putting the show out on DVD, I suppose it’s only polite for us to sit down and watch it. So here we go.

A quick spoiler warning: What follows is a commentary, and not a review — the difference being that I may give away the endings. Therefore, this article is intended for people who have seen these episodes before, or who don’t care about spoilers for 20 year old puppet shows. If you haven’t seen these and you care, go buy the DVD and we’ll meet you back here. (If you’re buying it, and please go ahead and do that, just remember: It’s available exclusively at WalMart and at the HIT Entertainment website until October.) 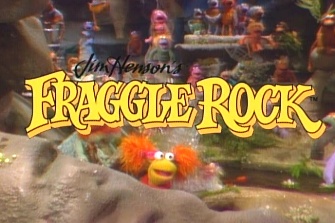 The first episode of Fraggle Rock aired in January, 1983 — so, to get the context here, let’s take a look at some of the other children’s shows on television in 1983. Let’s see. Gilligan’s Planet was on that season, which was a cartoon version of Gilligan’s Island, but in space — and so was The Gary Coleman Show, a cartoon starring Gary Coleman as a guardian angel. In space. Or not in space, maybe, I don’t know. They made The Little Rascals into a cartoon that year, too, and Richie Rich, and Pac Man, and Saturday Supercade, which was a bunch of shorts about Donkey Kong and Q*bert. For the first half of 1983, there was The Scooby, Scrappy and Yabba Doo Show, and then in the fall, they changed it into The New Scooby and Scrappy Doo Show. The Monchichis had a show that year, and so did Rubik the Amazing Cube… and don’t forget the Mork and Mindy – Laverne and Shirley – Fonz Hour. Basically, 1983 was the year that all the TV producers in the world just said, screw it, we get rich no matter what we do, let’s turn any old thing into a cartoon and then pay some Koreans two bucks an hour to animate it.

So try to keep all that in your head when you fire up your Fraggle Rock DVD, that your options as a child at that moment are Rubik the Amazing Cube, Scrappy Doo… and this.

The theme song for Fraggle Rock lasts a full sixty seconds, which is long for a theme song, but in that one minute, there’s more creative energy than in all those other 1983 TV shows combined. You start with Doc and Sprocket in the workshop, you go down the hole to the Fraggle caves, and then there’s the Doozers, and then there’s the Gorgs’ garden, and everything is running around and shouting and dancing, and basically, if you like having a lot of television show in your television show, then this is the one for you.

Right from the first moment, you get a sense of how big this show is. The Muppet Show had basically three main sets, and Sesame Street has basically one big set. But Fraggle Rock is full of scenery, and big puppets, and little puppets, and caves and dogs and swimming and everything. How exciting would it be, to be that child in January 1983, your eyes glazing over after another episode of Gilligan’s Planet, and then you switch the dial and you see all of this! You’d get the shock of your life.

And it’s not just puppets and scenery. Early on, Uncle Matt narrates a little description of the Fraggles: “Fearless, dignified, intelligent… they represent the very pinnacle of civilization and culture.” BONK! And a Fraggle walks headlong into a stalactite, followed by another Fraggle balancing a pumpkin on his nose. This is Jerry Juhl doing the script, and after five years of writing The Muppet Show, he has a perfectly tuned ear for mixing clever lines with basic physical humor.

Am I gushing too much about this? It’s hard to watch the first episode without appreciating all this stuff; it’s all set up for you to be impressed. The Fraggles sing a song about themselves, and there’s just long pans across huge crowds of Fraggle puppets, all moving and dancing, and every puppet looks different. There’s seventeen puppeteers in the credits, and every single one of them is working in this scene. They went to town making this show, and they want you to know it.

The main Fraggles all get a couple lines to show off how funny they are, and then Uncle Matt informs Gobo of his decision to travel into outer space — by singing an original song, “Follow Me.”

And as they sing, you sit back — you still being the child of 1983, I guess — and you say, holy crap. This is a musical. They’re setting the tone of the show, and emphasizing a story point, using what can only be thought of as your standard Broadway musical wishing song. Disney would get credit for rediscovering the family musical with The Little Mermaid in 1989, but Fraggle Rock was doing it six years earlier, and they were doing a half hour of it every single week.

And then we get this fantastic Doozer building scene. This stops the show cold for a full minute so we can do nothing but watch the Doozers marching around in their little boots putting in a road, but you don’t even notice that the plot has stopped, because the Doozers are magic. I know that there’s some kind of radio controlled servo mechanism thingies inside, and I’ve seen the pictures of Faz Fazakas standing there with half built Doozer guts around him — but when they show three Doozers marching along in front of Wembley, with no strings or puppeteers or anything, it just looks like magic to me. I can’t figure out how they do it.

And then they go out into the Gorgs’ garden, and now Gobo is a little tiny puppet, and he runs past Junior Gorg, who’s shot from below and just looks absolutely enormous. And then we meet the Trash Heap, who has a hilarious voice and who sings another song, with two funny rats singing background vocals. This is now the fifth original musical number of the episode, not counting the theme, and they even have rats doing background vocals! (Remember: The other show that’s on right now is Saturday Supercade.)

And then they do my very favorite thing of the whole episode, the thing that makes you say, yeah, this is a world I want to spend five years in.

Gobo goes back and talks to his friends, and he decides to try going out into outer space to find Uncle Matt’s message. And instead of fading out, the camera pans up… and up… past the ceiling, into rock… and then some roots, and what looks like a pipe… then more rock… it’s a long pan, it actually takes ten seconds to get up there… more roots, and more pipes… and then up through the floor, to show a scene in Doc and Sprocket’s workshop.

They do that all the time as the series goes on, but before we get used to it, I think it’s worth taking a moment to appreciate what a brilliant idea that is. I can’t think of a single other example of a television show doing something like that — spending ten seconds on a slow pan from one set to another, to show you the surprising way that these scenes all fit together. That’s world building, that’s what that is.

Just from watching this one episode, you — the amazed child of 1983 — can easily imagine walking all over this new world. They even show you how to do it during the opening theme. You start in Doc and Sprocket’s workshop, maybe giving Sprocket a little pat as you walk by. You head through the hole, and down the tunnels, twisting and turning a little bit as you find your way to the main Fraggle cave. (Just follow the sounds of singing and splashing, then turn left.) You say hi to the Fraggles, take a dip in the pool, and then you can either head down one tunnel to Gobo and Wembley’s room, or off another tunnel (the one to the right, I think), towards the Gorgs’ garden.

You can picture all of this in your imagination right now, can’t you? Isn’t it hard to decide what you want to do first? Do you want to walk over to the big Doozer construction and watch the Doozers work for a while, or try sprinting across the garden to talk to the Trash Heap? Junior Gorg is lurking right at the end of that tunnel, but there’s a cheery fire down in Gobo’s room… It doesn’t matter what you choose to do. You just want to stay.

So now you’re the child of 2004, or the adult Muppet fan or whatever you are, and tell me: Even today, is there any other place that would be more fun to play in than Fraggle Rock? It’s a good thing this is out on DVD now. Our kids need Fraggle Rock just as much as we did back then.