Watch a 49-Year-Old Video of a Muppety Robot

The internet era has proven to be a golden age for Jim Henson fans, with old and rare stuff surfacing online left and right.  Here’s another one: As reported by IT World, AT&T has released a long-unseen film that Jim Henson made in 1963 for a seminar for business owners, featuring a robot talking about the “growing relationship between man and machine.”  Check it out:

I can’t be the only Muppet fan who watched this video and thought of  the Talking Machine and Sam the Robot, right? 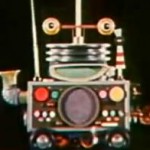 Thanks to Tough Pigs’ own Staci for alerting us to this! Click here to get wound up on the Tough Pigs forum!

Watch a Brief Preview of the Muppets on “Good Luck Charlie”