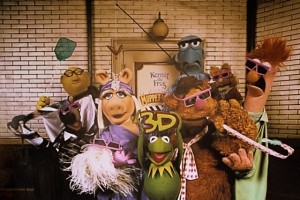 Terrible news for fans of the Muppets, Disney theme parks, and the third dimension.  Rumors are poppin’ in our faces saying that Muppet*Vision 3D in Anaheim’s Disneyland may be closing soon.

According to SlashFilm, Disney is considering expanding their Pixar presence in the Disney California Adventure park, and the land where Muppet*Vision may currently sits be replaced with a Monsters Inc. roller coaster.  Removing Muppet*Vision would then pretty much reduce the Muppet presence at Disneyland to nothing.

It’s worth mentioning that this is only a rumor for a proposal, but both rumors and proposals have the possibility of becoming true, so we’ll keep our mouse ears to the ground until we hear something new.

It’s also worth mentioning that the Muppet*Vision in Walt Disney World in Orlando is still standing, so the show must still go on!

Thanks to ToughPigs’ Twitter follower Scott Champion for the info! Click here to reach out and touch Bean Bunny on the ToughPigs forum!