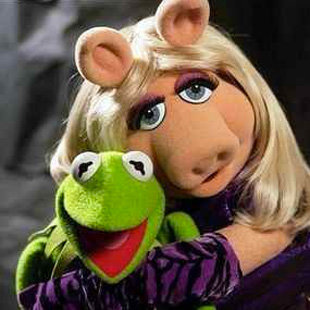 Ready or not, the promotional machine for Muppets Most Wanted seems to have kicked into gear this week. In addition to the full-length trailer, four different articles written by Muppets have been posted online.

First we have “5 Greatest Drum Solos According to Animal of the Muppets,” as posted on Yahoo! Music. This one feels like it was put together in about five minutes.  Anyone who really knows Animal knows he’s a fan of Buddy Rich, but Rich is nowhere to be found. Not to mention the fact that the first item on the list doesn’t even have a drum solo in it.

Then there’s “Miss Piggy’s Advice For Making a Relationship Last,” as posted on Yahoo! Shine (a website for people who polish shoes?).  It’s pretty much what you’d expect if you’ve ever read an article by, or a scripted interview with, Miss Piggy. On the other hand, it did inspire me to Google “Louboutins,” so I learned something today.

Over on Yahoo! Movies, we get “Kermit the Frog Tells Who Are the Big Cameos in ‘Muppets Most Wanted,” which has the longest and most awkward title possible. But it’s informative and sounds like Kermit could have written it.

Meanwhile, Yahoo! TV has “Fozzie Bear: 5 TV Shows That I Most Want Guest Star On.” Surprisingly, Fozzie only lists one comedy.

Disney Insider (not a Yahoo site!) has “Gonzo’s Most Wanted Disney Poultry.” As some fans have pointed out on the Tough Pigs forum, #4 on this list is a bit startling, considering the fact that Gonzo’s interest in chickens is usual sexual and/or romantic. But I think it’s meant to be more of a general appreciation of chickens as performers and as people.

Finally, there’s “Walter’s Favorite Moments From the Muppets Most Wanted Trailer,” also on Disney Insider. This one definitely reads like Walter wrote it, and it sums up the trailer nicely with a list of highlights, some images and commentary by a true Muppet geek.  It’s really a —

Click here to work with Ray Liotta again on the Tough Pigs forum!

Watch This: In Today’s Toyota Video, Kermit and Pepe Meet the Fans