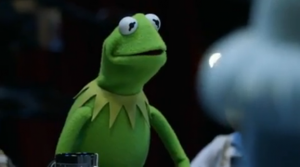 My expectations for The Muppets were high.  Not just regular high, but like Muppet Show high.  Blame those promos, which really seem to be promising something hysterical and inventive and Muppety.  What I wanted in those first few seconds was the familiar drum roll, Kermit popping his head out of the ‘O’, and a rousing theme song.  Instead, we have a very quiet opener with no music, Kermit parking his car, and his morning coffee in hand.  The only similarity between the two is Kermit, which is technically the only requirement.

We got the rare chance to watch the first two episodes of The Muppets, which were made available to press before the air date.  (Lucky for us, we own fedoras with a press card sticking out of the top.)  A part of me wanted to wait and enjoy it along with everyone else on September 22nd, but I just couldn’t hold back.  Come on, you would’ve made the same decision.  And now that I’ve seen 44 minutes of New Muppet Stuff, I have lots of opinions about things!  Understanding that you guys wouldn’t want us to reveal every joke and plot point and surprise, we’ll be keeping this review spoiler-free.

The first question on everyone’s mind is: Is it good?  Yes, gang.  It’s good.  It’s really good.  The production value is fantastic, the writing is sharp, the pacing is quick, there’s a great respect for the characters, and it’s just so good. 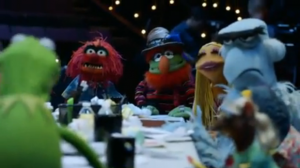 The next question: Is it funny?  No, it’s not funny.  It’s hysterical.  I laughed out loud several times.  Everyone gets at least a couple great one-liners, including a few background characters.  Zoot, for example, provided one great (and boundary-pushing) joke in each episode.  My prediction is that he’ll be to The Muppets what Creed was to The Office.

I was really impressed as to how well it handled all of the characters.  Kermit, now back in his familiar role as a showrunner, has more than enough on his plate to stress him out, giving us more “frustrated Kermit” and “frazzled Kermit” than “sad Kermit”.  When he’s not handling a crisis, he gets his own quirks and insecurities, already giving the 60-year-old frog some new dimensions.

Miss Piggy spends most of her time in diva mode, which should surprise no one.  But there’s hope on the horizon for a more nuanced, less obnoxious pig.  She has a surprisingly vulnerable moment in the pilot, and there’s a short scene showing what kind of talk show host she is (and why people might actually want to tune in to see her every night).  There’s just enough of a third dimension in those first few episodes to give us hope for a Piggy who can be more than just bossy and angry and karate choppy. 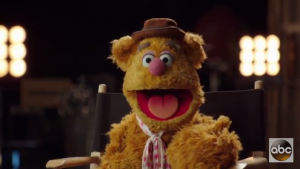 Fozzie Bear gets some good screen time, and we get to see a lot more of his sensitive side rather than just another batch of bad puns.  Fozzie was always at his best when he was begging for approval, and each episode finds a unique way of showing that part of his personality.

And then there’s Denise.  She’s only in two scenes in the pilot (and not at all in the second episode), but I’m pleased to see that she isn’t a sexpot or a flirt or a homewrecker.  It’s still too early to make a call on how we really feel about her, but it looks like she might be cute and quirky and maybe a little geeky.  Quite possibly a much more natural fit for Kermit.  By the end of the season, perhaps some of us will be shipping those two rather than Kermit and Piggy?  I know, blasphemy!  I’m sure we’ll have more opinions about Denise after she has more than, like, two minutes of screen time.

The show is really taking advantage of the fact that they have a cast of hundreds.  Minor characters litter the background, and special attention is given to a few of them.  Big Mean Carl, Bobo, the Newsman, and Uncle Deadly each get a moment to shine, opening the doors for C- and D-listers everywhere.  Truly, they are the trailblazers of the unknown Muppets. 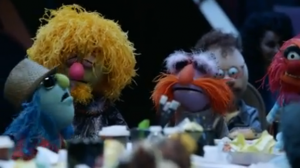 Long gone are the days of one celebrity guest star per Muppet show.  Each of the two episodes we saw were riddled with stars.  As previously reported, Elizabeth Banks appears in the pilot (including one incredible scene with Scooter, of all characters!), but the Muppets still take center stage.  I won’t reveal the other celebs, but each one brings something new to the table and makes every second count.  Which is smart, because most of them only get so many seconds.

I’ve talked a lot about the good, so you’re probably wondering about the not-so-good.  Thankfully there isn’t much of it (and like any series, the problems will likely be ironed out after a half-season or so), but I think I know what most people will dislike about it.  A workplace sitcom like this doesn’t lend itself to songs or sketches (although both episodes featured musical numbers, they weren’t presented as standalone performances), which is what the Muppets do best.  But that’s what happens when people tune in hoping for The Muppet Show 2.0.  Hopefully audiences will be just as excited to see The Office (But with Muppets Instead of People), because that’s what we’re getting.

There’s so much more to say (the production value, the puppetry tricks, the new human characters, etc etc etc), but we’re going to be writing about this show every week for the next few months, so I’ll leave some of it up to our team of reviewers.  Needless to say, unless you’re expecting a clone of The Muppet Show (which isn’t just unrealistic, it’s unfair), you’ll love The Muppets.  When the show begins and there’s no Muppetational theme song to get you riled up for a half hour of variety show fun, keep your mind open and prepare for something new.  Believe the hype!  And don’t forget to tune in on September 22nd!  And then every week after that!  Reruns too! 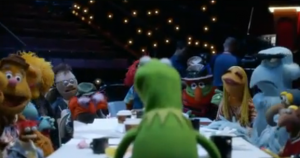 Click here to hold a meeting on the ToughPigs forum!