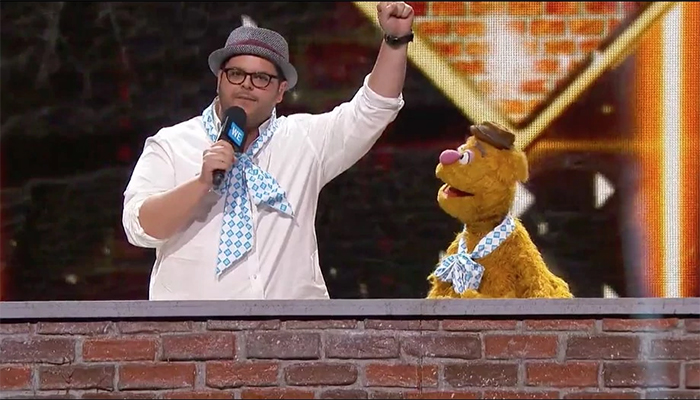 Hey, at least one of these individuals is going to be in a Disney+ series… but not together.

Hey, remember back in February, when we told you there was a rumor that the Muppets would be starring with Josh Gad in a Disney+ series called “Muppets Live Another Day?” You know, the one that takes place right after The Muppets Take Manhattan, where Kermit breaks up the Muppets only to have them reunite to find a missing Rowlf the Dog? You might recall that we said that you should take that rumor with a grain (or two scoops’ worth) of salt. Well, we hope we didn’t ruin your sodium intake too much, but as it turns out, the series was actually in development. The bad news is that that is no longer the case. “Muppets Live Another Day” is DOA.

According to The Hollywood Reporter‘s Lesley Goldberg, Gad, along with fellow series co-creators Josh Horowitz and Eddy Kitsis, have departed the project, prompting Disney to cancel it. Goldberg reports that the trio was working under Muppet Studios Vice President Debbie McClellan on the project. McClellan departed Muppet Studios earlier this year, and Disney CEO Bob Iger named Disney Parks Live Entertainment Senior Vice Presisent David Lightbody to take over the studio. Lightbody apparently wanted a different direction for the Muppets, and offered Gad, Horowitz and Kitsis the chance to develop a new series with the characters, but they were so strong in their belief in the series that they decided that rather than throw away over a year’s worth of work, they would depart from the project. The split was reportedly amicable. Gad took to social media to elaborate the series that could’ve been, including original songs from Frozen‘s Bobby Lopez and Kristen Anderson-Lopez.

But there is some good news in all this: the project’s cancellation has no effect on the production of “Muppets Now,” the unscripted variety short series coming to Disney+ next year. We are still getting a Muppet series on Disney+. It’ll just be “Now” instead of “Another Day.” (Though, in a bit of irony, it is in fact coming out another day and not now.)

And looking at it with a bit of optimism, it is encouraging that Disney is at least willing to consider having multiple Muppet series on Disney+. It won’t be “Muppets Live Another Day,” but who knows? Maybe this means the Muppets haven’t reached the end of the rainbow just yet.

Click here to be dog gone on the ToughPigs forum!