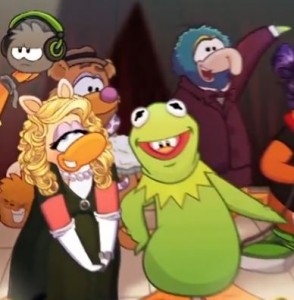 I must admit I had never heard of Club Penguin until very recently, when it was announced that the Muppets would be doing a “World Tour” of it. So I did some searching, and here’s how Wikipedia describes it:

You got that?  Good, because I don’t understand a lick of it.  But the good news is, Club Penguin will soon be hosting a “Muppets World Tour” to coincide with the release of Muppets Most Wanted. It starts on March 20, and — well, here, watch these videos.  It’s two short teasers followed by a longer “trailer”:

Click here to be a flightless bird on the Tough Pigs forum!