Entertainment Weekly‘s new issue contains their annual Fall Movie Preview, and I was pretty happy to see which movie garnered a big ol’ two-page photo and a write-up for the month of November.  Nope, it’s not A Very Harold & Kumar Christmas — It’s The Muppets! 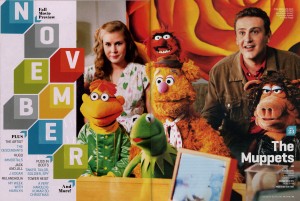 Thousands of readers will ask themselves, "Who the heck is Miss Poggy?"

The article is a lot like three hundred other articles we’ve read about the movie, but it does include a few encouraging tidbits.  James Bobin says he’s been thinking a lot about what makes something “Muppety,” which is a word we use all the time.  Nick Stoller talks about his and Segel’s great respect for the characters.  And there’s this fun photo of Jason Segel and Walter, apparently opening presents on Christmas: 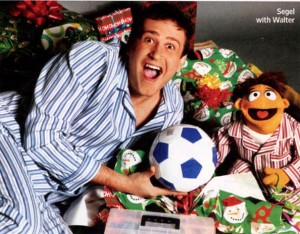 By the time this movie comes out, there won’t be a single person on the planet who doesn’t know about it.  What  a glorious age we’re living in.

Click here to tinker, tailor, soldier and spy on the Tough Pigs forum!

UPDATED WITH SCANS: There’s a Frog on the Cover on Entertainment Weekly!