I used to work at a café and while there I gave myself the responsibility of decorating the soup board every morning. I’m not much of an artist, believe me, my drawings were crude and at times hard to decipher. But I did try to correspond the drawing to the soup. I would draw an anthropomorphic tomato and block of cheese for “tomato cheddar,” or my rendition of Popeye for “Tuscan white bean with spinach.” But whenever I was at a loss of what could correlate to that day’s soup, I automatically defaulted to a drawing of something Muppet-related.

“Make sure to save room for coooookies! Om nom nom!” Cookie Monster shouted.

“Who you callin’ ‘shrimp’? I am a king prawn, okay?” Pepe corrected customers.

“And you can count the crackers!” the Count Von Count exclaimed.

But the first time I used one of these unlicensed drawings of Muppets to advertise a soup it caused a bit of confusion. The sign featured a picture of Kermit telling people that the vegetable soup was “Muppetational.”

There are words in the English lexicon that many people use on a regular basis. Movie critics will often describe new films as being sensational. Many calendar companies make quote-a-day versions with inspirational phrases. And even though “celebrational” isn’t technically recognized by Merriam-Webster or Funk & Wagnalls, it’s perfectly acceptable to put it on a birthday party invitation. But I have found that the hardest word to describe is probably the most made-up one from “The Muppet Show” theme song: Muppetational.

What makes something Muppetational? What makes it transcend that level of hilarity and whimsy and kind-heartedness and become a quintessential component of what makes the Muppets the Muppets? What is that quality that is at the very heart of what they tried to find in the Rainbow Connection between the lovers, the dreamers, and us? What makes doing pratfalls and birdcalls and bad imitations not seem hokey, but absolutely delightful?

When the Muppets first exploded onto the television scene in 1955, Jim Henson began a new branch in the craft of puppetry that many acts have tried to replicate ever since. There have been numerous projects on the puppetry landscape that have tried to capture the essence of what the Muppets have achieved, with varying results. But what makes Sesame Street a mainstay to this very day, whereas Eureka’s Castle is something fondly remembered but no longer around?

There’s a humor in everything the Muppets do, sometimes even when they’re not trying to be funny. They can turn a phrase like no one else thanks to the talented writers they’ve had over the years, but they can also turn their faces and bodies to the camera and give a gesture that can make you laugh just by how they look at you.

Two things the Muppets posses more than any of the other puppet acts out there combined are heart and soul. Is there any doubt that a Muppet cares about the person they‚Äôre talking to? Have you ever seen Grover, for example, give someone anything less than his full attention?

He cares about the child he’s talking to, giving them undivided concentration, and most likely a hug at the end. After all, hugs are a huge part of what love is.

The Sesame Street Muppets posses a childlike wonder and eagerness to learn new things that makes them experts at interacting with others. They engage the people they talk to, draw them in, and let them know that they care about them. And in doing so, the Muppets prove that they have soul.

You’d have to be completely heartless and totally devoid of a suspension of disbelief to not feel a sense of magic and wonder when walking onto the set of Sesame Street. (Or, you know, Joe Pesci) Numerous celebrities have reported that talking to a Muppet makes you forget all about the performer underneath and get sucked into the idea that they are talking to that creation. Jason Segel cried the first time he spoke to Kermit, for Pete’s sake!

And just look at OK Go’s lead singer, Damian Kulash, try to keep his composure while talking to this little, green friend.

Be honest, wouldn’t you get the same way if you were in the presence of greatness such as this?

There’s something the Muppeteers put into these felt and fleece characters that makes them really come to life, makes you forget all about them being “fictional” and just let loose and try your best to keep up with them, while accepting them as “real.” They jump out at you, even when they”re on screen, and come to life. They become something tangible, and downright lovable.

And on top of all of that, they”re hilarious. There is never any doubt that I will laugh at a Muppet performance. The Muppets can be corny at times, telling the kind of jokes a dad might tell, full of puns and eliciting groans rather than laughs. But they sell it; they make you laugh at how ridiculous they are and how hard they’re trying. Fozzie’s entire career is built around invoking sympathy most of the time instead of genuine laughs‚ we laugh at how bad his jokes are!

It’s hard to analyze all of this. Why do I (and all you readers out there, I’m sure) forgive these bad puns and terrible jokes because they’re coming from the Muppets and not your uncle? When I tell people about my obsession with the Muppets, there’s usually a moment where they agree and try to express their own level of commitment to my favorite comedy troupe. “I love the Muppets, too,” they’ll say.

And the immediate, almost-unanswerable question that follows is, “Why?”

The fact of the matter is, I can’t explain it. A love of the Muppets has just always been a part of me, and I guarantee it always will be. Maybe that’s what makes them so special, that je ne sais quoi; that indelible, unexplainable spark that ignites when they’re on screen. There’s nothing exactly like them, even though so many have tried to duplicate it. But no matter what it is, everyone can relate to them; everyone can name a character or a movie or a sketch that they loved as a kid or saw recently on YouTube, maybe for the first time or maybe for the millionth. I have never once heard someone say, “Muppets? Never heard of ’em.” Or, “I hate the Muppets.” You can relate to people through this mutual admiration; you can share your own favorites and connect in this wonderful way. Maybe THAT is the Rainbow Connection, a feeling that unites all of us in an amazing way.

So I guess I can’t say for sure what it means to be “Muppetational.” Maybe no one can. But maybe that’s what makes it so special. I just hope it means that we’ll all keep believing; keep pretending; doing just what we set out to do. 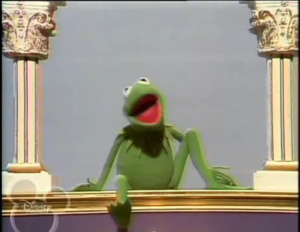 Why Does Everyone Love Pigs in Space So Much?