Why So Many Muppet Uncles?

On a recent podcast appearance, someone mentioned the word Uncle and I couldn’t tell if they meant Uncle Deadly or Uncle Travelling Matt.  In thinking it over later, I started to realise that Muppet uncles were far more prevalent than once thought.  The more I mulled it over, the more uncles came to mind.  Elmo’s Uncle Furgus.  Big Bird’s Uncle Slim.  Uncle Kermit, for goodness sake!  There are far more Muppet uncles than there are Muppet parents, and I’m wondering why.

Could it be that uncles are more fun than parents?  I’ve been an uncle since 2011, so I feel qualified to say the answer is yes, I’m way more fun than my brother-in-law.  Don’t get me wrong, he’s a fun dad, but he also has to be the disciplinarian when the kids are doing the wrong thing.  Whereas I’m the one whispering in their ear to do the wrong thing, because that’s way more fun.  We don’t need to know about Gobo’s parents, because they wouldn’t be encouraging their son to go into creepy caves.  But his Uncle Matt?  That dude is all about spelunking!  Where is the fun in stories of a child constantly disobeying his parents? It belongs in Dennis the Menace and that’s about it. (Side note: the 1990’s Dennis film with Walter Matthau totally holds up).

Could it be that introducing more Muppet parents would interfere with the ambiguous ages of these characters?  Sure, we know Elmo’s dad Louie, but we also know Elmo is three and a half.  We don’t know how old Scooter is – he could equally be 20 or 50.  So if we met his mother, or heaven forbid, his mother’s boyfriend Ken, then we’d be able to gauge an idea of how old Scooter was and our entire association with him would be changed in some way.  Whereas by introducing his uncle JP Grosse, owner of the Muppet theater, we’re given that family connection while still keeping that ambiguity to Scooter’s age.  Uncles can be all sorts of ages – my uncle on my mothers side is only 20 years older than me, but my uncle on my fathers side is close to 40 years older than me.  Heck, even by making Miss Piggy the aunt of Andy and Randy, we still keep age ambiguity on all three characters because who knows how old Piggy and her siblings might be!?

It could also be a backstory thing. If we meet Kermit’s dad, for example, we’re faced with wondering what happened to Kermit growing up. I for one refuse to acknowledge Kermit’s Swamp Years, and I’m not sure for me it’s important to know why Kermit is the way he is. Frank Oz has a whole backstory to Miss Piggy, growing up poor on a farm with a tonne of siblings. If I meet her mother, I’m going to get some form of character development which is on the one hand great, but on the other hand too hard to corroborate with every other thing we’ve learnt about Miss Piggy and our own assumptions about her. By keeping parents and siblings out of it, we’re left with a wide open backstory that we can fill in ourselves, instead of something set in stone.

Uncles can be mysterious, like Bunsen’s Uncle Baron Petri von Honeydew who lived in a creepy castle. Uncles can be generous, like Fozzie’s uncle lending out his Studerbaker while he hibernates. They can help teach lessons even when they’re gone, like Elmo’s late Uncle Jack. They can be nurturing, like Robin’s Uncle Kermit. And they can just be totally bizarre, like everyone’s uncle Uncle Deadly. Whoever they are, they’re an important part of our lives, and of the lives of our favorite Muppety pals. 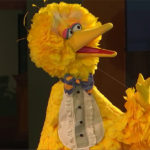