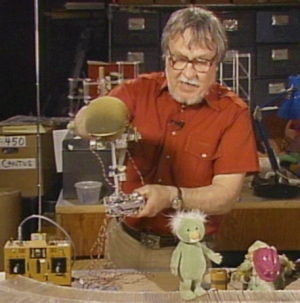 It’s been reported on social media (though not yet confirmed by mainstream news) that Franz “Faz” Fazakas, longtime puppet designer for the Muppets, has passed away at the age of 95.

If you’ve read the various Muppet history texts out there, you’ll be familiar with Mr. Fazakas’s name, and how significant his contributions to the evolution of Muppet technology were. As Muppet Wiki tells us, he developed the eye mechanism seen on Big Bird and Sweetums, but he also played a huge role in the development of radio-controlled Muppets, from Emmett and Ma Otter rowing their boat in Jugband Christmas to rats making pancakes in The Muppets Take Manhattan.

He was especially important on Fraggle Rock, where he was credited as “Muppet Mechanical Director.” That’s a pretty intimidating-sounding job title, but Fazakas pulled it off flawlessly, working on some of the most impressive puppet effects the Henson company had yet achieved. With his expertise, the Muppets were able to convincingly do things they had never done before. Of course, it’s also long been rumored that Fazakas’s nickname inspired the name of Fozzie Bear.

Today we remember Franz “Faz” Fazakas, and we’re grateful for all his contributions for making our favorite characters that much more real.