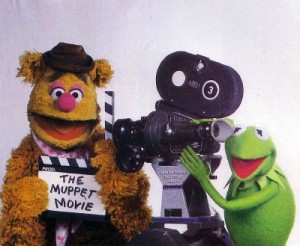 According to a couple sources, the upcoming Muppet movie, currently titled “The Greatest Muppet Movie Ever Made” recently had a table reading with the cast. And while I’m personally staying very wary about the status of the film, it’s incredible exciting to hear that they’re actually making headway on getting the movie made.

But in the long run, what are we learning from this newsbit? Quite a few things, actually.

They did a table read. This thing is moving forward! That’s good news!

The Muppeteers are on board. Not that there was any question about it (c’mon, if they’re going to do Studio DC, there’s no way they’d back out of a feature film), but it’s nice to have confirmation that the puppeteers are sticking around for this one.

The writers and director are actually listening to the Muppeteers. When you’ve got three newcomers coming into the franchise to write and direct the new Muppet movie, why not get as much input from the guys who know the Muppets better than anyone? That was one of the problems from the last few productions (most likely due to hurried shooting schedules, shifting crews, and poor choices from corporate Disney), so it’s great to know that the Muppeteers’ voices will be heard in more ways than one.

Nick Stoller isn’t bitter. When the project was originally announced, Nick Stoller (one half of the writing team, along with Jason Segel) was tapped to direct the film as well. But then James Bobin came along and Stoller was relegated to just one credit. But here he is, with excitement steaming out of his ears about the movie. If he was holding any grudges, he might not be so pleasant on the set, but it sure sounds like he’s ready to roll.

The table reading is on tape. Nick Stoller suggested that the taped reading appear as a special feature on the DVD, but even if that doesn’t happen, it’s nice to know that video proof exists somewhere. There are too many Muppet events that never got taped and are now lost in the ether. I wonder how long it would take for that video to find its way into the trading circles…

James Bobin knows his stuff. Bobin is still new to the directing game, so it’s hard to tell what he is and isn’t capable of. Nick Stoller mentioned that Bobin has been making suggestions of obscure (well, obscure to other people) Muppets to use in the movie, like Uncle Deadly. And while it doesn’t bode too well for Stoller and Jason Segel to be unfamiliar with a fan favorite like Uncle Deadly, it sounds like Bobin has been doing his homework and is ready to take his part in the Muppet universe.

The Muppet Bible is still around and is still accurate. Jim Henson and Frank Oz wrote a “Muppet Bible”, which has all of the “rules of the Muppets”. I don’t know much more than that, but it’s apparently still being used today, as the writers have a copy to reference during the production. And I want one. Like, more than anything in the world.

The new film will have that “Muppet Movie” feel. But maybe not much else. Even though the story sounds like it takes place after the airing of The Muppet Show (even with the plot point of returning to the theater), Segel and Stoller might not be as familiar with the show as they are the original three movies. Likewise, they don’t seem to be as familiar with the post-Jim films, which should be required viewing for someone working on a new Muppet movie, even if they don’t plan on pulling anything from them. Of course, this is all speculation, but I think we have a right to be overly paranoid about rumors like this, don’t you?

Hopefully more details will start sprouting up now that something like this table reading took place. Can a shooting schedule be far behind?? Or a rebuilt Uncle Deadly puppet? I really don’t know which one is more exciting.

Click here to read a table on the ToughPigs forum!