Whew! How about that Muppet Madness Tournament, eh? There was a lot of excitement this week, especially with the titanic battle between a certain red monster and two stripe-shirted roommates. Let’s run down each matchup as we prepare for Round 3.

Kermit (5,240 votes) vs. Animal (3,943 votes)
Not much suspense here, as the crazy drummer fell to the frog who signs his paychecks. We keep saying it’s a given that Kermit will make it to the final two, and so far that looks no less likely… but I suppose anything can happen.

Fozzie Bear (6,130 votes) vs. Miss Piggy (3,033 votes)
This faceoff of Frank Oz characters led to some interesting discussion on the Tough Pigs forum. Exactly what sort of Muppet fans prefer Fozzie to Piggy? What does a voter’s choice of Muppets say about them? I was really torn on this one, and I’ll admit I started out voting for the bear before switching to the pig halfway through the week because I felt bad seeing her fall so far behind. Anyway, I sure wouldn’t want to be the one to tell her she lost.

Cookie Monster (4,897 votes) vs. Oscar the Grouch (4,269 votes)
Not a huge margin here, but there was never much doubt that Cookie would take this one. Oscar has now been eliminated from the tournament, which will probably make him pretty unhappy, but as we all know, being unhappy makes him happy, which makes him unhappy, etc., etc., ad infinitum.

Bert & Ernie (7,494 votes) vs. Elmo (6,092 votes)
Wow. This was by far the most intense contest of the tournament so far. Early in the week, Elmo took the lead, and he kept it for several days, with an ever-growing percentage of the vote, causing anguish and confusion for thousands of Bert and Ernie fans. But by the time Round 2 concluded, the old-school dudes had grabbed a decisive lead over Mr. Noodle’s buddy. I don’t want to sound accusatory here, but suspicions have been raised that somebody on Team Elmo may have been stuffing the ballot box in this race. If that’s not true, I apologize to the Elmo-voters. If it is true… well, you’ll have the rest of your life to live with the knowledge that you attempted to rig a Muppet fan tournament.

Wembley Fraggle (4,014 votes) vs. Red Fraggle (3,690 votes)
This was a really close one for a while… but yeah, Wembley’s just a little bit more lovable than Red. Sorry, Red!

Sprocket (4,802 votes) vs. Boober Fraggle (2,905 votes)
Boober’s out of the tournament now, but at least he can take some satisfaction in knowing that he didn’t lose to Sprocket by the same kind of gigantic margin as Junior Gorg. How much farther can Sprocket go in this contest? He might be the dog to watch (even though he’s not a watchdog).

Skeeter (4,624 votes) vs. Hoggle (3,375 votes)
The weirdest matchup of this round. How do you even compare a character invented for a Saturday morning children’s series to the villain’s henchman-turned-hero’s sidekick from a musical fantasy film? Ultimately, Scooter’s fake sister got over a thousand votes more than Jennifer Connelly’s pal, rendering Skeeter the last remaining female character in the tournament.

Bear (4,367 votes) vs. The LaChoy Dragon (3,526 votes)
I found this one to be a surprisingly tough choice. I mean, the LaChoy Dragon is a hilarious early Muppet character… but Bear’s just such a nice guy. And he’s a lot less likely to scorch you or destroy your kitchen, so I voted for him, and apparently so did lots of people.

And so our contest moves into Round 3, with some of the toughest matchups yet! Kermit vs. Fozzie! Bert & Ernie vs. Cookie Monster (Holy crap, how to choose?)! Wembley vs. Sprocket! Skeeter vs. Bear!

And that’s not all, because we’ve thrown a VERY EXCITING SURPRISE TWIST into this round! For the first and last time ever, you can vote for your favorite eliminated character from Rounds 1 and 2, and help give them another shot at the championship! The winner of this wild card round will move on to Round 4, where he or she will go up against all four quadrant finalists in the fight to the finish! In other words, it’ll be the Show winner vs. the Street winner vs. the Rock winner vs. the Rest winner… vs. the resurrected Muppet! I bet you didn’t see that coming.

Who will it be? Time will tell (but unless there’s an incredible upset, it will probably not be Baby Sinclair)!

Voting for Round 3 will be open through Saturday night (April 3). As in the first two rounds, you can vote once every twelve hours. So go ahead — vote right now!

As always, Joe Hennes and myself will be discussing tournament goings-on on this week’s MuppetCast podcast, and you can follow the Tournament on Twitter and on Facebook, where you can see oodles of cool fan-made character badges. 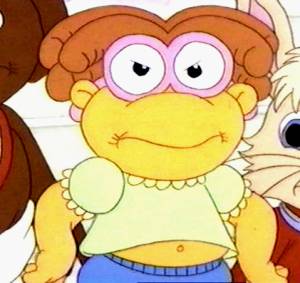 Click here to express your great relief that Bert & Ernie won on the Tough Pigs forum!