After a full week of voting for your favorite Muppets (or at least the Muppets you dislike a little less), the results of the first round of the Muppet Madness tournament are in! And those results resulted in more than a few surprises. Let’s take a look at each one and take it way too seriously.

Poor Gonzo, he never had a chance. As much as the weirdo deserved to move on to the second round, people just love that frog too much. Will he have the same chance with the rest of his battles? Does any other character have as good odds to win the whole she-bang as Kermit? Only time will tell!

It was the battle of the YouTube favorites! How could you choose between Animal’s tour-de-force in Bohemian Rhapsody against Beaker’s Ode to Joy? Obviously you figured it out, because Animal pulled ahead with 57% of the vote.

We heard a few complaints from people who believed that Pepe didn’t belong in “The Show” category since he never actually appeared on The Muppet Show. But even his connections to the Muppet Show cast of characters couldn’t save him from the full brunt of the Pig. Very few things could save someone from the Pig, which means we might be seeing a lot more of her in this contest.

I don’t know about you, but I had a tough time deciding who to vote for between these two furry mammals. I’m sure I canceled out my own votes more than once on this contest. But it was the Bear who beat out the Dog. I blame the polka dot tie.

I love Big Bird. Big Bird was one of my first friends. He taught me how to read and that it was okay to make mistakes. But Oscar is such a badass, I couldn’t help but root for him. Though he’s probably pretty upset that so many people just announced their fondness for him.

This is another contest that gave me some pause. Cookie Monster is so hilarious and single-minded, while Grover is adorable and flawed. I hope people didn’t vote for Cookie Monster just because they want to convince Sesame Workshop to change him back from being the Vegetable Monster.

This was by far the most nerve-wracking contest in the bunch. Every five minutes, one monster would pull ahead of the other. Even in the final hours, Telly was making a steady comeback to take the lead once more. But time wasn’t on his side, because the Red Menace took the gold with a mere 74-point lead.

When round one began, Bert and Ernie took a strong lead. There was no way The Count would catch up. Slowly but surely throughout the week, Count von Count gained votes and came pretty dang close to actually beating the dynamic duo. But he didn’t. So he’s done.

I hate to see Fraggles fight amongst themselves. But if they must fight, then at least it can be as exciting as this one. With just 52% of the vote, the indecisive Wembley overtook the self-congratulatory Gobo. Personally, I couldn’t bring myself to vote against the kind-hearted wembler, even though he is fictional.

Did Mokey really have a chance? They don’t even put her on DVD packaging! Though Mokey is the Fraggle most likely to vote in the Muppet Madness tournament, since she’s the only one with live hands.

When we were interviewed on the MuppetCast last week, I was convinced that Boober would be the easy win for the Fraggle Rock quarter. But now that I see how close his race against Traveling Matt, I might have to rescind that remark. I’m glad Boober made it to the next round, but he might not make it to round 3 because he’ll be up against…

…Sprocket! Sprocket beat out Junior Gorg with a whopping 81%, which puts him strong in the running to win the entire Rock quarter. And would you blame him? He’s a real dog!

Babies fightin’ babies! Did people vote for Skeeter because they have fond memories of watching Muppet Babies during those oh-so-important years in which their adolescent development was at an important junction, thus imprinting the animated characters into their psyches, only to reemerge during this critical moment in time? Or do we just have horrible memories of the Dinosaurs album?

The most interesting part about this race wasn’t how close the votes were, but the response from the legions of Bear and Emmet Otter fans. Bear fans were utterly passionate about an ursine win, while Emmet fans didn’t want to live in a world where an otter can’t overtake a bear. Sadly, it looks like Emmet put that hole in the washtub for nothing, because Bear is taking away the prize.

In the least popular contest of the entire game, The LaChoy Dragon roasted Wilkins and Wontkins in Dragon Fire. It was nothing Wontkins wasn’t already used to.

So now our round 2 combatants have been chosen! It’s Kermit vs. Animal! Piggy vs. Fozzie! Oscar vs. Cookie Monster! Elmo vs. Ernie and Bert! Wembley vs. Red! Boober vs. Sprocket! Hoggle vs. Skeeter! Bear vs. The LaChoy Dragon!

Be sure to cast your votes in round 2! Remember, you can vote once every 12 hours until March 27 at midnight! Click here for the official Muppet Madness tournament website! 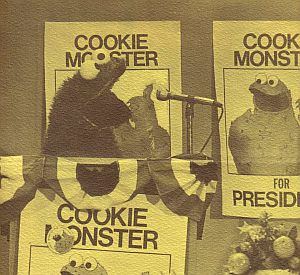 Click here to discuss the bizarre circumstances that led to a Hoggle vs. Skeeter matchup on the ToughPigs forum!