IMPORTANT NOTE: In this episode, we speculate about the origins of Fozzie’s catch phrase “wocka wocka.” After we recorded the episode, Frank Oz provided an answer in his Reddit AMA: This scene is the first time Fozzie said it. According to Frank, the script noted that Fozzie came out to do his act, “but there was no comedy act written, so I just made one up — and what you see on screen is what I showed Jim in an empty sound stage about a week before. And he loved it, so I kept it. And it really is a steal from old fashioned burlesque comedians.” And there you have it!

Movin’ Right Along 338: A Lot Happens in Two Weeks

Movin’ Right Along 342: Bursting Through the Door to Put on a Show 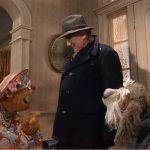