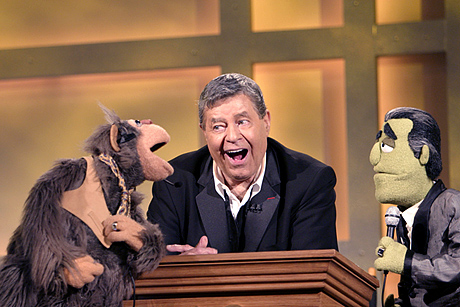 Earlier this week, we were saddened to learn that comedy legend Jerry Lewis had passed away.  Although Jerry never guest starred on The Muppet Show, appeared in any Muppet movies, or popped up on Sesame Street, he still had a great working relationship with the Muppets as guests on his annual Jerry Lewis MDA Labor Day Telethon, which he hosted from 1955 to 2014 and raised millions for the Muscular Dystrophy Association.

The Muppets’ work on his program was nothing short of fantastic, proving how great they are in front of a live audience, creating short-form (aka Muppet Show-style) sketches.  Unfortunately, only a few are currently on YouTube, and we’ll be revisiting them now.

Among the missing videos are Kermit and the Snowths singing “Mahna Mahna” in 2002, several performances by Bear from Bear in the Big Blue House, and from two separate telethons, Muppets hosting a part of the overnight shift (Johnny and Sal in 2005, and then Rizzo and Pepe in 2007).  Hopefully these bits will pop up online someday, but for now, we still have a few gems.

1980 – In the Muppets’ first (sort of) appearance at the telethon, a rollerskating Bert and Ernie from Sesame Street Live help the Roller Skating Rink Operators Association donate over $3 million to MDA.  Although it was for a good cause, I bet the ROA is wishing they had kept the money.  Oh, and Jerry Lewis does a weird imitation of both Bert and Ernie, and then inexplicably asks for a cookie.  Twice.  (Bert and Ernie appear around the 6-minute mark.)

2001 – Kermit sings “Bein’ Green” with Calvin Ray Johnson, a musician who suffered from muscular dystrophy.  I know, you’ve heard this song a billion times.  So why not one more?

2001 (again) – Kermit sings “I Got My Mind Set On You” with the Snowths.  They probably could’ve gotten Mahna Mahna to sing this George Harrison classic, but Kermit actually knows the words.

And that’s it (for now)!  Thanks to Jerry Lewis for doing such great work for the MDA, and for allowing the Muppets to play along with you.

Click here to flayyven in the klayyven hey LADY on the ToughPigs forum!