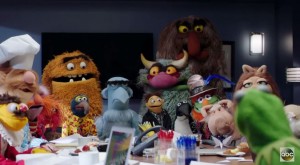 There’s been a lot of talk around the internet about The Muppets, the upcoming TV series. Not to be confused with The Muppets, the 2011 movie, or “the Muppets,” the family of characters.  (I’m so looking forward to constantly making that distinction.)  Despite some hand-wringing about the promise that the show will be a “more adult” take on the Muppets, the vast majority of the chatter about it has been positive and enthusiastic.  There’s a lot of “I can’t wait to have the Muppets back!” and “This is going to be so much better than all that other crap on TV!”

And yet, even with all the hallelujahs and happy dances, there have been some naysayers.  Most of these rain-on-our-paraders have pointed out that it’s been almost 20 years since the Muppets’ last attempt at a primetime series, and that one didn’t exactly set the Nielsen ratings on fire.  But you know what?  I think this show genuinely has a shot at being a success, and two things in the past week have served to make me even more confident of that feeling: the official trailer, and an interview producer Bill Prady did with New York magazine’s Vulture blog.  If you haven’t already, you should read the Vulture article right now, and in case it’s been more than 24 hours since you watched the trailer, here it is:

The first hope I had when the pilot presentation was announced was that it would be funny.  And this trailer totally is.  Fozzie dating a human woman is a great idea that you’d think they would have done years ago.  “The band is always happy… legally, now” is a joke that’s just adult enough that I had to think about it for a moment before I got it, but it manages to stay within the bounds of a Muppet joke.  And the gag where Miss Piggy runs into the glass is not only a nice bit of physical comedy, it also indicates a very Henson-like attention to detail when we see that Piggy has left a snout mark.  A snout mark!

Then there’s Piggy’s failure to identify many of her fellow Muppets, including Gonzo (Gary?).  A few fans have suggested that this makes the pig look stupid, but I think it’s hilarious and perfectly in character for our favorite diva.  She’s a star! Why should she bother remembering the lesser performers’ names?  And sure, it contradicts any previous time we’ve seen her address the others by name, but that’s the great thing about the Muppets not having a set continuity.  They can get away with jokes like that. 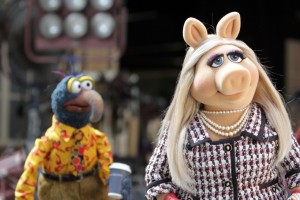 One of the biggest reasons I’m optimistic that this show will succeed where Muppets Tonight didn’t is right there in the first shot of the trailer.  Look at all them Muppets!  It’s become a generally accepted fact that a major part of Muppets Tonight‘s downfall was the dearth of familiar characters.  We, the true fans, understood that the writers and performers tried their best to fill the gaps left by the loss of Jim Henson and Richard Hunt, and the busy schedule of Frank Oz.  But as funny as Johnny Fiama, Sal, Seymour, Pepe, and Bobo were, audiences tuning in to ABC in 1996 expecting to see Those Beloved TV Icons The Muppets quickly tuned out when they realized how little their favorites would be featured.

But now things are different.  All the major and supporting characters have regular performers.  Even several of the minor Muppets have voices once again.  A long-term project like this regular TV gig will be a perfect opportunity for the performers to really explore what they can do with characters they’ve thus far only played in two movies and a handful of TV guest appearances.  The show’s mission to get into the personal lives of the characters practically guarantees that we’ll finally get to know the real Sweetums.

Speaking of supporting and minor Muppets, here’s another thing: Muppets Tonight used a lot of new puppets as the crew and cast of the show within the show.  They were perfectly nice puppets, but we never got to know most of them.  And even if we had, there was still the issue of missing our old friends from The Muppet Show.  I’d expect no less after the Mass Character Comeback we got in the last two movies, but the trailer promises a show packed with creatures we recognize. Uncle Deadly, Pops, and Beautiful Day Monster are all visible — and okay, the average TV viewer doesn’t know who any of those guys are, but they’re another indication that The Muppets is committed to remembering who the Muppets are. 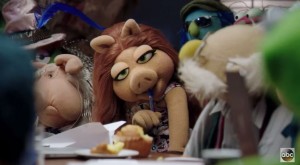 Which is not to say that they can’t look forward at the same time.  For one thing, the trailer features a new pig character, who looks an awful lot like a brunette Spamela Hamderson, but who we now know is named Denise.  And if Piggy’s reference to Kermit’s having “moved on” is any indication, Denise just might be Kermit’s new girlfriend(!).  If she’s an actual character with a real personality, and not just there to be an attractive pig who makes Piggy jealous, that would be a great leap forward for the franchise.

Although the early reports of the pilot had many people assuming it would be The Muppet Show all over again, we now know that, thanks to Floyd’s brainstorm, The Muppets will be a take on the mockumentary style of shows like The Office and Parks and Recreation, and it will take place behind the scenes of a Muppet-produced talk show hosted by Miss Piggy.  After years of pessimism about the revivability (not a word!) of the Muppet Show format, I had changed my mind and decided that it was a viable option.  But in the Vulture article, Bill Prady has me convinced that it’s okay for the old format to stay in the past:

“The Muppet Show was a variety show because when it was on, that was the dominant form of television,” Prady explains. “If you turned the TV on then, what [did] you see? Sonny and Cher and Carol Burnett and Flip Wilson and Richard Pryor and Lily Tomlin. That was television. So The Muppet Show made fun of variety.” 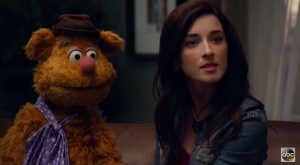 It’s a good point.  Chances are very slim these days that you’ll see Flip Wilson when you turn on the TV.  They want hip young people to watch this show, and while I haven’t taken any polls lately, I tend to doubt that hip young people are very enthusiastic about vaudeville theaters.  But lest we think the gang is abandoning their bread and butter, Prady goes on to quell our fears that the mockumentary format would be too restricting to allow the Muppets to do what they do:

“Think about what’s being done in late-night these days,” Prady says. “They do almost anything. So we have a lot of flexibility. We can be backstage. We can see a production number during rehearsal. We can be anywhere we want.”

It’s another good point. Jimmy Fallon’s Tonight Show, with its comedy musical performances, lip-synch battles, and other tomfoolery, is practically a variety show already, so The Miss Piggy Show or whatever they call it won’t seem like a stretch at all.  We might not see many English music hall numbers, but there’s still a chance we’ll get a Muppet performance of a well-known pop song… and dare I hope for the return of sketches like Pigs in Space? 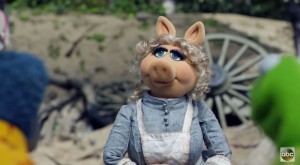 During the promotional push for Muppets Tonight, a lot of the media’s talk focused on how Clifford was at the center of the show instead of Kermit, and how there were a whole lot of new Muppets.  That was a perfectly entertaining show, but it just wasn’t the Muppet TV series the audience wanted.  Today there’s this notion that the Muppets are in the middle of their comeback, and now there’s a show on the way that promises to be full of familiar characters, and genuinely funny in contemporary but still Muppety way.  With production numbers!  I for one am eagerly looking forward to Tuesdays at 8/7 Central, when I can turn on the TV and say, “It’s time for The Muppets tonight!” 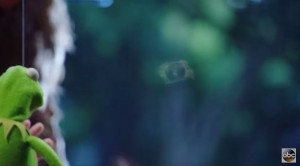