Round 1 has come and gone, and Round 2 is upon us! Our original 32 combatants have been halved, and it’s all your fault! By which I mean, thanks for voting.

The first round was a veritable roller coaster of emotions, as some races were won or lost from the get-go, while others were neck-and-neck until literally the last minute. Sadly, that meant that characters like Prairie Dawn and Roosevelt Franklin didn’t have much chance for a comeback, though Dr. Bob and Alistair Cookie were less than ten votes away from each other for the entire final day of Round 1. Needless to say, there was a lot to talk about around the watercooler.

And now, as the new round begins, you have until midnight on March 25 to cast your votes for the Round 2 contestants. Remember, you can vote every 12 hours, so be sure to show your favorite characters how much you love them! Or vote for both and cancel out your own votes! I honestly can’t think of any better way to spend your time.

And the nominees are…

Fun Fact: The Dr. Bob/Alistair Cookie race was so close, I wrote two different bits in this space, ready for either one to be declared the winner. And the one that didn’t get used will be lost to antiquity in the recesses of the ToughPigs sub-basement. In any case, Alistair Cookie out-classed the pun-spouting surgeon by a hair, while Dearth Nadir rode the coattails of his Sith Lord namesake to put the choke on Patrol Bear Fozzie.

The Favorite: It’ll be a close one, but we’re predicting Dearth Nadir by a (hook)nose.

Poor Reporter Kermit. Such an iconic character, out of the running after just one round. But if you’re gonna lose, I can think of worse guys to pull your plug than Super Grover. Meanwhile, Carl the Big Mean Bunny didn’t have a chance against the might of First Mate Piggy. But which of these two Frank Oz-performed lightning bolt-wearers will reign victorious?

The Favorite: Super Grover. Because he promised to protect me from Piggy’s inevitable berserker rage.

Mr. Snuffleupagus vs. Cantus the Minstrel

These two mysterious (or formerly mysterious, in Snuffy’s case) characters make for a bizarre matchup. But who will win: The giant who took down the brutal Sweetums or the philosopher more powerful than a magical fairy?

The Favorite: Mr. Snuffleupagus. Not so imaginary now, huh???

The Doozers vs. Mahna Mahna

The Doozers managed to take down Ludo, despite his ability to inexplicably summon rocks, while Mahna Mahna scattered the Trash Heap like she was a pile of leaves and he was a cannonballing 8-year-old. Can the Doozers build a sturdy foundation for Round 2, or will Mahna Mahna sink them into utter chaos?

The Favorite: Mahna Mahna will defeat the do doo do do Doozers.

Rizzo the Rat vs. Sam the Eagle

Both Rizzo and Sam managed to take down the dim-witted (but well-meaning) Link Hogthrob and Bobo the Bear, but do they have what it takes to defeat their MuppetVision 3-D pre-show costar?

The Favorite: Sam the Eagle. But is it cultural??

After the Penguins’ defeat of fellow bird Hoots the Owl, and Slimey’s defeat of fellow worm The Worm, these two fan favorites are going toe-to-toe (or flipper-to-whatever’s-at-the-end-of-Slimey).

The Favorite: Penguins. I would not want to be a worm in a fight against a bird. I’m just sayin’.

The Swedish Chef vs. Statler and Waldorf

Prairie Dawn and Roosevelt Franklin didn’t have a chance against these two (or three) powerhouses. But now that they’ve moved on to the next round, this is going to be the fight to watch. Either one of these has the likelihood to go all the way, and it’s only Round 2!

It’s not fair to pit Richard Hunt’s two signature Muppet Show characters against each other! Though we did it anyway. Sadly, Floyd and Guy Smiley are watching from the wings on this battle, but I wouldn’t want to get in the middle of it either.

The Favorite: Scooter by a yarn-like hair.

Now head on over to the Muppet Madness Tournament website and cast your votes! And remember, you can vote once every 12 hours, so head back often! 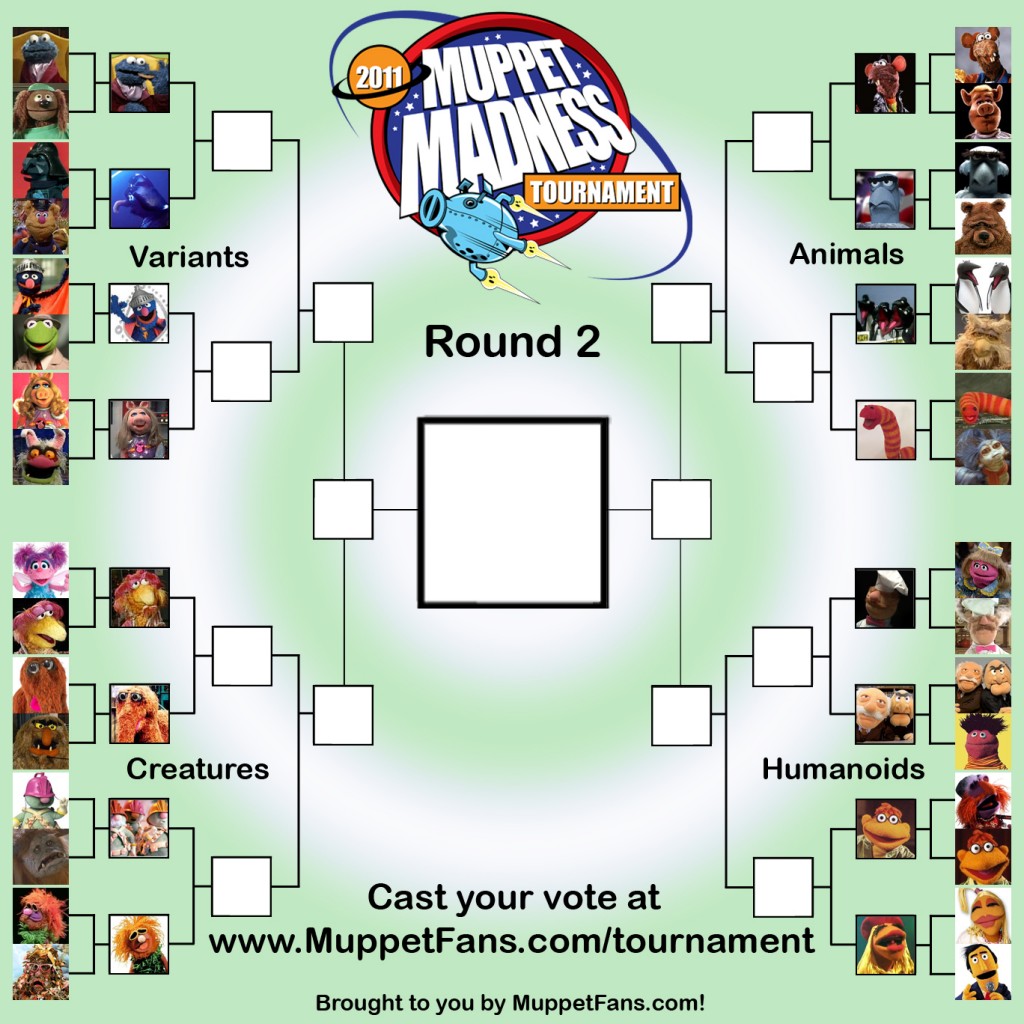 Click here to pull the giant lever on the ToughPigs forum!