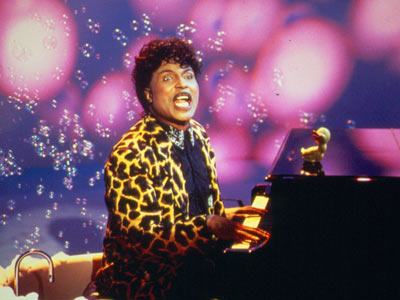 Richard Wayne Penniman, better known as singer and cultural icon Little Richard, has sadly passed away.  Best known for hit songs like “Tutti Frutti” and “Good Golly Miss Molly”, he was a mainstay on radios and television since the 1950s.

In 1993, Little Richard made a splash on his Sesame Street debut with his rendition of “Rubber Duckie”, performed in his own signature style.

Little Richard returned to Sesame Street to sing a song about feelings with Rosita.

The following yeah, he appeared in the Muppets’ music video for “She Drives Me Crazy” (at the 1:50 mark).

Finally, Little Richard makes what might’ve been his best ever TV appearance, on Muppets Tonight as one of the many celebrity cameos in “The Cameo Show” episode.  At 3:50 in the video below, Beaker does his best Little Richard impression, and it’s definitely worth watching rather than reading about.

Little Richard continued his Muppets Tonight appearance with a full performance of “I Hear You Knocking”, which you can watch below at about the 2:20 mark.

As you can see, Little Richard left an impact on the Muppets, just as he did on the world of music and pop culture.  He’ll be missed by all of us.

Click here to help us remember Little Richard on the ToughPigs forum!