Since the last time we sat down for a chat with The Muppet Show Comic Book writer/artist Roger Langridge, he wrote a Pigs In Space one-shot and wrote and illustrated the three-issue story, “On the Road”. Why did we wait so long before sending him another batch of questions? Hey, you try coming up with 10+ original questions for the same guy every month!

The most exciting/bizarre/surprising move from Langridge was the appearance of post-Muppet Babies Skeeter (see the new taller version of her in our 5-page preview here!) in the first issue of the “Family Reunion” story, which is being illustrated by the phenomenal Amy Mebberson.

In what is now our seventh (!) Q&A with Roger Langridge, we’ll talk about all of that stuff and more! Take it away, Roger!

ToughPigs: There was a little confusion on the order of the next two storylines: ?¢‚Ç¨?ìFamily Reunion?¢‚Ç¨¬ù and ?¢‚Ç¨?ìGuest Stars?¢‚Ç¨¬ù. What happened that forced the scheduling switch?

Roger Langridge: Without getting into the specifics, the “Guest Stars” arc had to be shelved at the eleventh hour at Disney’s request (though I’ve incorporated some of the material that would have appeared in that arc into our next one). This meant finding a replacement story at very short notice, so the “Family Reunion” arc was bumped forward, since that one was already approved. Amy Mebberson had been slated to draw that one from the very beginning – it was written with her in mind – so her guest stint was moved forward as well. Fortunately, her schedule allowed her to take it on, just about! Service above and beyond the call, frankly.

TP: So then is the “Guest Stars” story arc permanently shelved, or just delayed?

RL: If we use the idea at some point, it’ll be different from the one I wrote, as I’ve already used some of the ideas from it for other stories. Not any time soon, I think.

TP: You took off from your artistic duties for a few months and handed them off to Amy Mebberson. Did you have any input on which artist to take the Muppet Show Comic reins?

RL: No, but Amy was a terrific choice and I’ve been really happy with how it’s worked out. 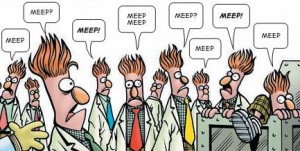 TP: What did you do with your free time when you didn?¢‚Ç¨‚Ñ¢t have to both write and illustrate the comic?

RL: “Free time” is not quite the word! When the “Guest Stars” arc was shelved, I was way behind on scripts all of a sudden, so I spent some of that time simply catching up. I’ve also been doing some writing for Marvel, and I’ve got the art chores on a Doctor Who story to do as well – a promise I made to Doctor Who Magazine last year, and one of the reasons I requested a guest artist in the first place (the other being that I was falling behind schedule a little more each month!). Then I had a trip to New Zealand to fulfil some family obligations (I’m writing from there now) — working while I’m here to get ahead on my Muppet comics schedule. So it hasn’t really slowed down!

TP: In the ?¢‚Ç¨?ìOn the Road?¢‚Ç¨¬ù story arc, you spent two issues with the Muppets traveling from town to town and one issue at the newly rebuilt theater. In a storyline that was already shortened to three issues, why only spend two of them away from the status quo of the theater?

RL: Mainly because I had that idea of the Mystery Box showing up at the theatre which I wanted to get to – also because I wanted to restore the theatre to its usual glory sooner rather than later. They were always going to be in the theatre again by the final issue anyway. I tried having Gonzo take the long way back to tease things out a bit longer!

TP: Now that you?¢‚Ç¨‚Ñ¢ve shown that the Muppets can survive outside of the theater, do you have any plans to take them outside or elsewhere again?

RL: I wouldn’t rule it out, though not right away – the comic is really about the Muppets in the theatre trying to put on a show, and departures from that should probably be kept to a minimum. There are plenty of other Muppet comics that show the gang in different environments. 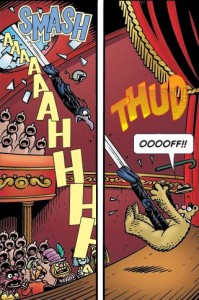 TP: Now that a few trade collections of The Muppet Show Comic Book are out, we?¢‚Ç¨‚Ñ¢ve seen that there isn?¢‚Ç¨‚Ñ¢t much in terms of bonus pages. Do you save things like character sketches, rejected cover ideas, etc. that BOOM Kids can publish in the back of the trades?

RL: I’ve got stacks of cover sketches – I don’t know how interesting they’d be to a general audience, though. And I have to say that the Disney Adventures material in the first collection is bonus material a-go-go, in my opinion!

TP: What went into the decision-making process to bring Skeeter back?

RL: Amy asked! It was really just that. She was really excited about doing it. I built the entire “Family Reunion” arc around Amy’s desire to draw Skeeter.

TP: Why didn?¢‚Ç¨‚Ñ¢t you reference Skeeter by name? Was that an artistic choice or did that come from editorial/Disney?

RL: There was some sort of problem at Disney’s end, I’m not sure of the specifics. We did come to an arrangement of sorts in the end, but you’ll have to wait and see how that plays out – I’m not going to spoil it for you!

TP: How difficult was it to update Skeeter?¢‚Ç¨‚Ñ¢s personality to an adult-aged version of herself? Did you have to go back and research her character in Muppet Babies to try and get it right?

RL: Not too much – I knew in broad strokes how Skeeter’s personality worked, usually in contrast to Scooter and Miss Piggy, and I kind of busked it from there. I knew Amy was much more familiar with the character than I was and I knew she wouldn’t be shy about telling me if I got it horribly wrong, so she had my back there.

TP: Did you feel like you had to ?¢‚Ç¨?ìgeek up?¢‚Ç¨¬ù Scooter in this storyline so he would clash more with his sister (as well as fit in more with the baby version of himself)?

RL: Not really – I didn’t add anything to Scooter’s personality that wasn’t already well-established. I certainly played up those aspects that were a bit nerdy, though – putting Skeeter in the same room as Scooter tends to bring those aspects out. But he’s always running around with a clipboard trying to keep things ticking smoothly – that’s certainly not new.

TP: What sort of assistance did you get from Disney on this storyline? Was there a strict approval process? Did they have to approve the idea before the script was written?

RL: The approval process is always pretty strict. They see the plot ideas before a word of the script is written, and then they see the scripts and there are always changes to be made. Having said that, I’m informed by Boom! that the changes I’m asked for aren’t as drastic as those requested on some of the other Disney books. It can still require a bit of ingenuity to accommodate them all, though – especially if they’re requested after the artwork is drawn, which can often be the case. 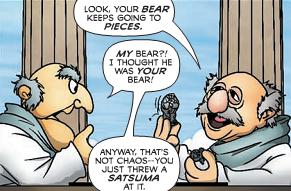 TP: At the beginning of the latest issue, Statler and Waldorf are seen as gods, playing chess with the Muppet characters. What inspired this bizarre sequence? Is there more to the old geezers than meets the eye?

RL: Our friend, the lovely Mr. Jim Lewis, requested that we make Skeeter’s appearance on the show a little bit ambiguous as to whether it was happening “in continuity” or not. The chess sequence was my way of addressing that – is it real or isn’t it? Well, it’s as real as you want it to be. That celestial Statler and Waldorf aren’t “our” Statler and Waldorf, exactly – I figure they’re a character type that pops up throughout the universe (see also the population of Little Statwald and the film producers in the Pigs in Space issue). I didn’t show the regular S&W in their usual box to stop it getting confusing. One set of those guys is enough!

TP: How closely did you oversee Amy Mebberson?¢‚Ç¨‚Ñ¢s work?

RL: I watch the pages roll in and I admire them.

TP: How far into the series are you now? Did the break give you a nice head start?

RL: A small head start, give my other commitments, but a head start nonetheless. I’m currently drawing issue 8, with #9 scripted and #10 and #11 plotted. The next story arc is mapped out in broad strokes at this writing. Up next is “Muppet Mash”, a horror-themed arc using the classic Universal Monsters archetypes (Dracula, Mummy, Wolfman, Frankenstein) as a springboard for mayhem!

As always, many thanks to Roger Langridge for all his hard work!

Click here to play chess with dogs and frogs and chickens and things on the ToughPigs forum!