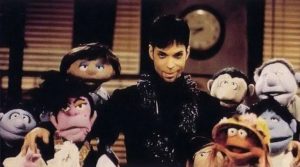 As the world mourns the loss of Prince, Muppet fans have been doing a lot of reminiscing about his classic Muppets Tonight episode from 1997 (about which we recently wrote at-length).  Kirk Thatcher, who wrote and produced the Prince episode, shared his memories of working with the Artist.  Kirk has graciously allowed us to share his memories here on ToughPigs.

Below is Kirk Thatcher’s original post.  Many, many thanks to Kirk for allowing us to share it! 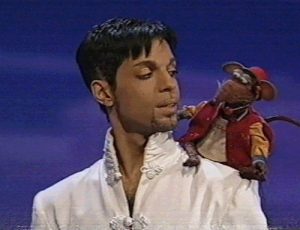 So very sad about Prince… another gone much too soon. I was fortunate enough to spend a couple of days working with him as a writer/producer on Muppets Tonight about 20 years ago and thought I would share.

We were very excited that Prince had agreed to do our Muppet comedy and variety show but had been told by his managers and support staff before we met with him that we must never look at him directly or call him anything but, “The Artist” or just, “Artist”. As the writers of the show, we were wondering how we were going to work or collaborate with someone you can’t even look at, especially while trying to create comedy with puppets!!! It’s not a easily discussed or achieved endeavor!

Considering all this we were obviously nervous before our meeting with him. I think it was a Sunday or Monday night after regular work hours. He had a core group of staff who arrived before him to make sure everything would be to his approval. We joked that Prince wasn’t just his name, he lived his life like a Royal and had convinced the people he employed that he was to be treated as such! All this led us to be rather worried how we would get comedy from him, or even get him to agree to the bits we had written. They had been sent to him previously for approval and we hadn’t heard any advance notice that he didn’t like any of it, but he wanted to meet the night before to discuss the show, and so we waited after work in a large conference room, amply supplied with the specific food and beverages his people had requested. 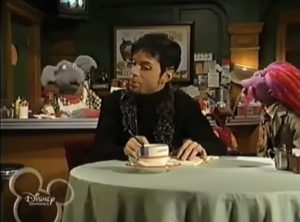 Very often, people in entertainment will agree to do shows without having ever read the scripts, instead dealing with it on the day or the night before. Visions of him trashing everything and forcing us to start over filled our minds!!! It wouldn’t have been the first time we had to rewrite a show before or during production due to that!

“The Artist” finally arrived and the first thing that struck me was how diminutive he was, especially standing next to his enormous security guard. He was only half again bigger than most of the Muppets! We awkwardly all introduced ourselves, careful not to address him in anyway, and trying not to look at him, but it just seemed so weird to do that, so I waved a little and said my name, as did most of us, and Brian Henson took the lead as we sat in the conference room and went over all the sketches he was in. He and his people seemed to get the jokes and enjoyed the fun we were having with him and he thankfully had very few notes. He just smiled and giggled quietly at the script and seemed very open to it all.

We became more comfortable with him after this and even looked him in the eye when we spoke to him! He didn’t seem to mind and we wondered if it was a test he had invented to see how people would deal with him and that absurd demand. Both that evening and during the entire shoot day, Prince had a bemused yet quiet air around him with a very quiet voice and impish grin. He had fun additions and improvs and loved playing and ad-libbing with the puppets and was very easy to talk to and work with. The impetuous and mercurial “difficult artist type” we had been warned about was never to be seen! His team was relieved as this was their chief concern, that he remain happy!

The whole situation with his advance team and management reminded me of the relationship I had created between Kermit and Sam the Eagle in Muppet Treasure Island. Sam had convinced everyone that Kermit, playing Captain Smollet, was a furious and angry tyrant, beset by inner demons and outer tirades. But when we meet him, he was just good, old, sweet-natured Kermit the Frog… just in a captains outfit. The same for Prince. He was just a nice, fun, creative guy who had built this persona around himself, and had a team there to reinforce it, probably to protect his art, his personal life and even his sanity. 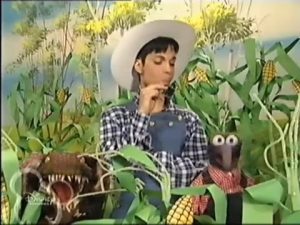 So the day went off without a hitch. He had fun playing a country bumpkin in the Hee Haw sketch and enjoyed all the Muppet silliness about his name/logo and his outlandish and sexy costumes. He smiled and laughed between takes and even chatted with me, as I was the Producer on set for most of his episode. His bodyguard was on point the entire shoot though, asking me about anyone who entered the soundstage who he hadn’t seen before, to make sure they were cleared. He had stories about the lengths fan would go to meet Prince and the insanity it created in them and it became clear it was not paranoia at all on his part or on Prince’s. I realized how incredibly taxing and shy that kind of fame would make someone, everywhere they go they are being stalked by not just the media, but by rabid, sometimes dangerously demented fans.

The day progressed as planned and Prince even stayed longer to do an extra song number that was on the list to be cut if time didn’t permit…He was having such fun that he changed his flight plans and worked until late that night or early into the next day to shoot it all. A complete professional in every way and an absolute joy to be around. We found out the next day or so that he had suffered a tremendous personal loss the day he left to come and shoot with us. Something big enough that most people would have canceled something as trivial as appearing on our show and taken weeks or possibly a month off to deal with. But he showed up and had fun and created a great show with us, the ultimate professional.

I have no photos of us together that day, as he and his team were very clear that no candid pictures were to be taken, but I have great memories of those couple of days, the tremendous respect I have for him as an artist, and as a professional as well as all his fantastic music that I grew up with. RIP: The Artist who will Always be Known as Prince. 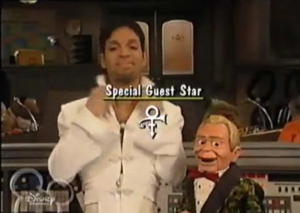 Click here to help us remember The Artist on the ToughPigs forum!