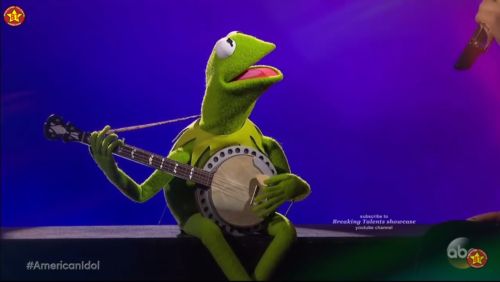 Some rinky-dink show called American Idol had their season finale last night, and somehow they managed to wrangle a megastar like Kermit the Frog to grace them with his presence.

Kermit hopped on stage with his left-handed banjo to reprise “Rainbow Connection” for the umpteenth time, but this time he sang it as a duet with American Idol contestant Maddie Poppe.  Later in the evening, Poppe would come out as the winner of this season of American Idol.  Coincidence???  Yes, probably.

Click here to play left-handed on the ToughPigs forum!

Watch Fozzie Bear @Midnight Without Staying Up Past Bedtime

Sesame’s Back to Work on The Today Show