Here’s my Pepe impression: “Hey, everybody, listen up. This is a big important thing, okay.”

Yeah, it’s not that good, really. But if the Muppets Holding Company goes with their current plan, I might try to brush up on it, cause apparently Muppet impressions are going to be the next big thing.

In early September, MHC is holding auditions for puppeteers — big cattle call type auditions in New York and LA. That’s a great opportunity for puppeteers who have always dreamed of working with the Muppets, and a lot of my puppeteer friends are really excited about it.

The problem is that the auditions aren’t just trying to find new talent — they’re trying to find “alternate performers” for the ten main Muppet characters, including Kermit, Miss Piggy, Fozzie and Gonzo.

This is a very bad thing, okay. 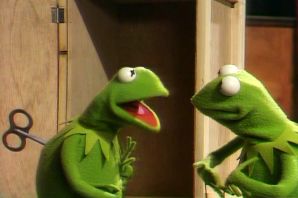 You see, Disney paid a lot of money for the Muppet characters, and now they want to step up their campaign to get the Muppets back into the public eye. That’s fantastic, and that’s what we all want. Unfortunately, the way they want to do that is to have Kermit appearing simultaneously in different places. There’ll be a Kermit performing on a Disney cruise line, and a Kermit greeting customers at the World of Disney store in New York, and a Kermit making an appearance on a local news show in Kansas City. And then somewhere in the world, hopefully, is a Kermit that’s performed by Steve Whitmire. You remember Steve Whitmire, right? The guy who performs Kermit?

And I’m not talking about big walkaround style Kermits, like they have at Disney World. Everyone can tell those aren’t the real thing; they’re not meant to be. These will be real Kermit puppets performed by different puppeteers, all of them claiming to actually be Kermit. That means there won’t be one Kermit anymore; there’ll be a whole team of them, all operating at the same time, like a franchise. That means that Kermit is instantly demoted from a “real” celebrity down to the status of those big walkaround costumes.

One of the things that I like best about the Muppets is that they can appear out in the real world — on talk shows, or awards shows — and they’re treated like they’re real celebrities. That creates this amazing double-vision feeling, tickling our suspension of disbelief in a uniquely pleasurable way. Just by being there, the Muppets are poking fun at the show they’re appearing on, turning the real world of show business into a parody. In order to do that, the Muppets need to be “real” to the audience. Kermit needs to be Kermit, not just some puppeteer playing Kermit.

People who see Kermit on a Disney cruise line will know that this isn’t “the real Kermit,” but he looks and sounds like the real Kermit. And when those people go home and talk about their cruise, they’ll tell people that they saw Kermit. Not the Kermit, of course, but a really nice young kid who played Kermit, and he was great. The kids were so excited, they thought it was really Kermit! That was weeks ago, and they’re still talking about it!

And bit by bit, person by person, they break the illusion. The idea that there’s a “real” Kermit becomes something that only a four year old would believe in. Adults know that there isn’t such a thing — Kermit is just a series of puppets that get passed around from one hand to another.

That’s not what I want Kermit to be, especially not now. This is the start of a big new stage for the Muppets, when they get back to being the popular stars that I remember. And when that happens, I want them to be strong characters, with the same amazing performers that they’ve had, and not watered down by imitations.

There’s something that you can do to make that happen. Right now, this is an idea that Disney is trying out, exploring their options, and there’s a couple things that can happen to affect the decisions that they ultimately make about it. For one thing, they need to see how the auditions go, and that’ll happen in September.

The other thing that they need to see is what happens when the audience hears about it — and right now, you and I are the test audience. This isn’t something that the general public would know about right now, so the people who know about it are puppeteers and Muppet fans — and I know for a fact that they’re watching us right now.

This isn’t the Giant Faceless Disney Corporation making decisions based on focus group data that we’re not part of. It’s a few key people at the Muppets Holding Company, and their focus group is us. This is the new postmodern way of getting instant audience response — looking at fan sites, and reading message boards. They want to know how people are going to feel about having substitute performers for the main characters, and right now, the people that they’re looking at are us.

So if the idea of turning Kermit into a series of Kermit imitators makes you unhappy, then this is the time to let them know that the audience wants a real Kermit. My friend Kynan has set up a website — SaveTheMuppets.com — with the contact information for the people at MHC who are making the decisions.

Please take a few minutes to write to them, and let them know how you feel. Also, please help to spread the word by posting a link to SaveTheMuppets.com on your blog, or your MySpace profile, or whatever you have.

Sometimes audience “campaigns” like this work, and sometimes they don’t. Let’s make this one work. Let’s save the Muppets.

Sam the Eagle vs. Will Smith

My Week with Steve: Day 3