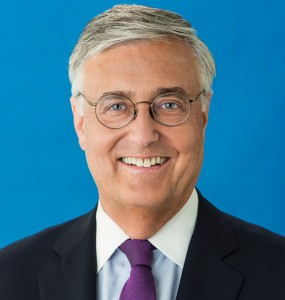 Sesame Workshop has named a new President and CEO.  And that name is Jeffrey Dunn.  Dunn will be replacing Sesame Workshop’s current CEO, Mel Ming.

Dunn has a long history of working in children’s television, having served as the COO at Nickelodeon, and more recently as the CEO at HiT Entertainment.  So basically, he’s worked for Blues Clues, Spongebob Squarepants, Thomas the Tank Engine, and now he’s ready to work for Grover.

Vincent A. Mai, Chairman of the Board of Trustees of Sesame Workshop, announced today the appointment of Jeffrey D. Dunn as President and Chief Executive Officer of Sesame Workshop, effective September 29, 2014. Mr. Dunn, formerly the President and CEO of HiT Entertainment, will succeed Mel Ming who announced his retirement earlier this year. Mr. Dunn will lead the nonprofit educational organization in its mission to use the educational power of media to help all children reach their highest potential.

Mr. Dunn currently serves as a 2014 Advanced Leadership Initiative Fellow at Harvard University with a focus on media and education. Previously, he served as President and CEO of HiT Entertainment from 2008 until 2012. HiT was one of the world’s leading independent children’s entertainment producers airing its content in more than 160 countries around the world, primarily on public broadcasters. HiT’s signature property was Thomas & Friends, which was the world’s leading boys’ preschool brand. Before joining HiT, Dunn served as Group Chief Operating Officer of the Nickelodeon Networks group and the President of Nickelodeon Film and Enterprises, where, among other things, he built Nickelodeon’s international networks business and oversaw the growth of Blue’s Clues, SpongeBob SquarePants and Dora the Explorer into three of the world’s largest licensed property brands.

“Jeff Dunn has an outstanding track record in the world of children’s media,” said Vincent Mai. “At HiT Entertainment, Jeff led the company’s resurgence and successful turn-around before it was sold to Mattel in 2012. And under his leadership, Nickelodeon became one of the industry’s most global networks, largest licensing businesses, as well as the world’s largest digital media business for kids. His current experience at Harvard is a testament to his commitment to the educational power of media and we look forward to the Workshop thriving under his creative, inspired leadership.”

Jeff Dunn said, “Sesame Workshop really invented the business of kids television as we know it today and all of us in the kids media industry recognize the debt we owe the Workshop for leading the way. I am truly humbled by this opportunity to join the Workshop and help to steer its future and educational mission.”

Jeff Dunn recently served on the board of American Greetings and Sprout, the award-winning preschool children’s TV network. He graduated with honors from Harvard College, and earned his MBA from the Harvard Graduate School of Business Administration.

Sesame Workshop is the nonprofit educational organization behind Sesame Street which reaches 156 million children across more than 150 countries. The Workshop’s mission is to use the educational power of media to help all children reach their highest potential. Delivered through a variety of platforms, including television programs, digital experiences, books and community engagement, its research-based programs are tailored to the needs of the communities and countries they serve, helping children everywhere grow smarter, stronger and kinder.

Click here to lead the parade on the ToughPigs forum!