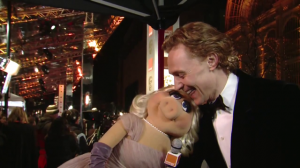 According to our friends over at the MuppetsHenson blog, a lot of Avengers fans, women on Tumblr, and, I dunno, people who have seen War Horse are going to be very happy.

Tom Hiddleston, best known as Loki in the Thor and Avengers movies, will be appearing in The Muppets… Again.  He’ll reportedly be playing “The Great Escapo”, which presumably means he’ll be a poor man’s Houdini, possibly failing at his attempts to escape from Miss Piggy’s clutches.

Click here to hope he wears the Loki horns in the movie on the ToughPigs forum!