You’ll Get a Kick(starter) Out of These Sprocket Shoes 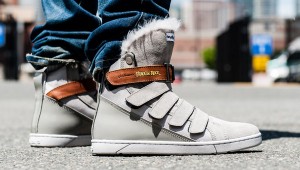 Back in January, Heyday Footwear announced their first collaboration with The Jim Henson Company in the form of Gobo Fraggle-inspired shoes.  While we’re still confused at the idea of footwear inspired by characters who don’t wear shoes, we respect the effort.

Now, Heyday is reaching out to the fans to get the next wave of Fraggle Rock shoes into production.  They’ve launched a Kickstarter to raise funds for their Sprocket-inspired shoes.  Click here to view the Kickstarter!

As you can see, the shoes are made with genuine Sprocket fur, with a dog collar around the ankle.  I can’t say I know too much about designer shoes to say if they’re cool or not, but collectible footwear has been a big fad recently, so maybe they’ll catch on?  Who knows.

On the plus side, the Heyday CEO uses the word “dope” a lot less than he did in his Gobo shoes video.  Unfortunately, it looks like the video got cut off before the end.  But it’s cool, we get the idea.

If you like shoes or if you like anthropomorphic dogs that are really terrible at catching vermin, consider donating to Heyday’s Sprocket shoes Kickstarter!

Click here to wonder when they’ll make Doc Crocs on the ToughPigs forum!