In case you were wondering why Fraggle Rock and the other Henson-owned TV shows were recently taken off of Netflix, it’s because The Jim Henson Company has launched their own paid YouTube channel, featuring full episodes of their shows.

For $2.99/month (or $24.99 for a year), you can watch Fraggle Rock, Sid the Science Kid, Construction Site, The Hoobs, and a bunch of other shows you probably haven’t seen yet.  You can even watch some of our, uh, “favorites” like The Skrumps and Mother Goose Stories.  Oh boy!  Here’s the press release that explains it all in a much more official manner:

HOLLYWOOD, Calif., May 9, 2013 /PRNewswire/ — On Thursday, May 9th, Jim Henson Family TV, the new paid channel from The Jim Henson Company, launches on YouTube (www.youtube.com/JimHensonFamilyTV).  For the first time, the new channel, featuring ad-free full episodes of hit shows like “Sid the Science Kid” and “Fraggle Rock,” will provide hours of family-friendly Henson content for computer, phone, tablet and TV viewing, all for the introductory price of $2.99/month or $24.99/year (a savings of 30%!).

Launching on the same day, Jim Henson TV para la familia en espanol (www.youtube.com/HensonEnEspanol) will debut Henson content in Spanish for$1.99/month or $17.99/year (a 30% savings!).  Coming soon, subscribers to the English channel can upgrade to include the Spanish channel for an additional .99/month or viewers can subscribe to both English and Spanish channels for $34.99/year.

Additionally, Jim Henson Family TV proudly offers YouTube’s highest level of content filtering, automatically engaging YouTube’s “safety mode” which identifies and filters out recommendations and links that may be inappropriate for young viewers.  This feature allows subscribers to enjoy Henson content in a more contained environment and disengages automatically when a subscriber leaves the channel.

“YouTube is once again redefining how, when and where we enjoy our favorite shows.  With the launch of Jim Henson Family TV, audiences can watch our hit shows again and again and we welcome parents to introduce their favorite Henson titles to their children in a convenient and affordable way,” said Richard Goldsmith , Executive Vice President, Global Distribution, The Jim Henson Company.

Along with full episodes of favorite Henson titles, the channel will include curated playlists, behind the scenes clips, music videos, podcasts and parenting tips.  With more content scheduled to be added, Jim Henson Family TV launches with the following line up:

Sid the Science Kid:  This Emmy®-nominated, Parents Choice favorite stars the inquisitive and funny preschooler Sid who wants to know everything about everything. Episodes feature a practical in-school science curriculum, using music and humor to celebrate children’s natural curiosity about science in everyday life.

Fraggle Rock: Currently celebrating its 30th anniversary, “Fraggle Rock” stars a cast of puppet creatures called Fraggles, who live in an underground world alongside their industrious green neighbors, the Doozers and a family of enormous Gorgs. The show continues to enjoy a loyal international fan following and encourages friendship, tolerance and diversity.

Animal Show: HostsStinky the Skunk and Jake the Polar Bear welcome guests of the animal Kingdom to the furriest talk show ever.  There’s music and merriment in this show that has the animal world roaring.

Construction Site:  A special place beyond the fence where, through the antics of the machines, children will discover important messages about the nature of learning, thinking, and behaving. The vehicles are brought to life using live-action fully-animatronic puppeteering technology developed by Jim Henson ‘s Creature Shop.

The Hoobs: The BAFTA-winning series “The Hoobs” inspires children to embrace the power of wonder and curiosity. The series reaches a multi-media generation with a delightful mix of puppetry, animation, and live action.

Mopatop’s Shop: Imagination and fun is always in store at the Mopatop’s Shop. The wondrous shop has everything you would ever want – a rainbow, the hiccups or a friend. Children are introduced to a variety of concepts such as shapes and musical sounds.

The Secret Life of Toys:  This series follows the adventures of a close-knit band of six toys that live in a world all children dream of visiting – where their first best friends come to life.

The Skrumps:  The web series “The Skrumps” features rock star hopefuls Wishbone and Skrumpy. In their unique universe of Skrumpland, rich with characters, comedy and music, The Skrumps celebrate the irreverence, comedy and heart that are at the core of The Jim Henson Company’s legacy. 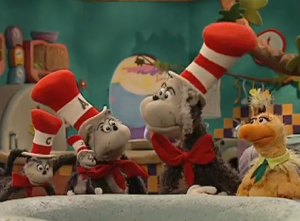 Many thanks to Kenny for the info! Click here to watch a Hoob on the ToughPigs forum!