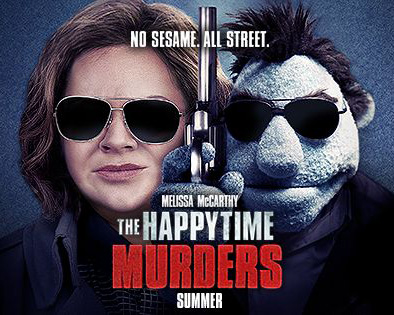 Joe Hennes: The first trailer for The Jim Henson Company’s The Happytime Murders dropped this morning, and already, Muppet fans everywhere have lots of thoughts.  So, so many thoughts.

Joe: First off, let’s refresh ourselves with the trailer one more time:

Joe: Well.  Where to begin?

I’ll start off with the stuff I like, because it won’t take too long.  I like Melissa McCarthy, who is still one of the funniest line readers in Hollywood.  I like puppets and practical effects, which this movie has a lot of. I love the basic premise, which is about cops in a puppet world, ala Who Framed Roger Rabbit.  (Note: That’s pretty much the end of the comparisons to Roger Rabbit, sadly.) 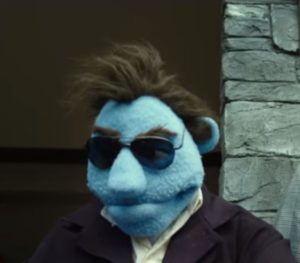 Ryan: Yes, the trailer starts out promisingly enough: Puppets roaming the streets of Los Angeles! And you can see their feet and everything! There are more shots than I would have expected in which the puppets’ entire bodies are visible as they walk, lift weights, and stomp on humans, all without using the frame to obscure the puppeteers.

Was this all done with puppeteers on green screens? Their movements certainly look more puppety than computer-animated to me. The film seems to have created a new way of showing us existing in the “real world,” alongside humans, and that’s cool to see.

Joe: Agreed, I’m excited to see Cool Puppetry Effects.  But the rest of it? I’m having some trouble here.

I’m not usually against raunchy humor.  But I’m also in my mid-30s, and my threshold is a bit lower than it was when I was, say, 13.  My basic rule is that things that are disgusting/sexy/inappropriate are totally fair game as long as they’re done cleverly.  So the question is: Are these jokes clever enough?

At some points, sure. Puppets can do things humans can’t.  They’re filled with cotton, and they get high on glitter. There’s a lot of comedy that can be culled from that sort of stuff, even if it’s over the line.

But at other points, I just don’t get it.  Puppets kicking people in the crotch, wielding guns, having orgasms, offering oral sex for drugs (and, unfortunately, so on and so on).  None of that makes me laugh, even if the acts are being done by a character that could be Johnny Fiama’s cousin. 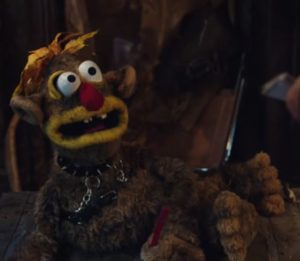 Ryan: I had a very similar reaction, although my threshold for vulgarity is actually much higher than it was when I was 13. I was a delicate youngster.

It’s only 23 seconds in when that strung-out puppet offers to perform fellatio on Melissa McCarthy for money. Now, I’m aware there are those in the audience who would find it unquestionably funny to hear a human character speak those words in a comedy movie. I imagine those people must find it HILARIOUS to hear it from a fuzzy puppet. And equally hilarious when McCarthy gets an offer from two puppet prostitutes. I know a trailer is not always a flawless indication of what a movie will be, but at this point, I suspect this is a movie for Those in the Audience, and not for me.

Joe: Blue humor is easy.  Make a dick joke, it gets a laugh.  But there’s nothing particularly clever about it.  In many comedy circles, it’s thought of as a crutch, only to be used in times of desperation.  So that’s what this trailer reeks of: Desperation.

Ryan: I thought I smelled something. As you mentioned, the cop movie tropes seem solid enough. Our puppet hero is some kind of maverick who doesn’t play by the rules… McCarthy’s character has to venture into a seedy world she’s not familiar with to crack the case… Over the many years we’ve been hearing about this movie, I’ve been anticipating a smart, clever riff on mismatched partner cop movies, with the gimmick being that it stars puppets.

Isn’t that enough? Does the gimmick have to be that they’re puppets AND they’re all cursing, doing drugs, and screwing?

Joe: Maybe all the raunchiest stuff is in the trailer?  Maybe the movie will only be peppered with that stuff, and the rest will be filled with weird jokes about puppets living in the real world, and a buddy cop murder mystery?  That’s awfully optimistic of me, I know. 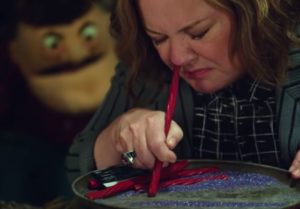 Joe: I’m also not crazy about the obvious (and unavoidable) connections to the Muppets.  Right off the bat, the trailer name-drops Muppet Christmas Carol, Muppet Treasure Island, and Muppets Tonight, while the tagline reads, “No Sesame. All Street.”  Will people expect Muppet and Sesame references in this film? If it’s a success, will audiences want more puppet films like this? If it’s a bomb, will that bode poorly for other puppet franchises?  You may have also noticed that the trailer makes specific references to both the Muppets and Sesame Street, but at no point is the Henson name mentioned.  Not director Brian Henson’s name, not the name of The Jim Henson Company.  It’s almost as if they’re trying to distance themselves from the backlash of this film, or the inevitable “What would Jim think?” question.

Ryan: It is strange that they don’t use the name “Henson,” but they refer to Sesame Street and Muppet movies. That’s going to cause confusion among the casuals… I guarantee some people will assume this movie is more directly affiliated with the Disney-owned Muppets than it is, and there will be some outrage.

Finally: I’m not a person who gets weirded out by seeing Muppet legs, but today is the day I learned that a puppet growing a tongue and licking another puppet gives me the heebie-jeebies. And perhaps you won’t be shocked to hear me say I never wanted to see a puppet ejaculate. Am I a prude? Maybe. Probably. But would it have been too much to ask for the filmmakers to aim a little higher?

Joe: Yes, I would be happy if they had aimed any higher than the crotch.

Click here to get the heebie-jeebies on the ToughPigs forum!

by Joe Hennes and Ryan Roe