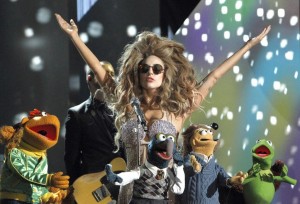 I’ve written up my Christmas wish list for 2013, and it includes various toys and games and sugar plums and things. But there’s one thing I really, really, really want this holiday season: I want to know who came up with the Lady Gaga and the Muppets Holiday Spectacular.

Was it an ABC network programmer, who saw that Lady Gaga was contractually owed a Thanksgiving special and decided to give it a family-friendly vibe by adding a dose of Muppets?  Was it a Disney movie executive, who had the bright idea to promote Muppets Most Wanted by hitching Kermit’s wagon to a pop star? Or was it Lady Gaga herself, because she just plain digs Muppets?

Either way, it made for a special none of us ever saw coming. As a duty-bound Muppet fan, I watched the special on ABC on Thanksgiving, but it seems most of the country was indifferent to it.  As the Huffington Post all-too-gleefully reported, the ratings were terrible. Nielsen-wise, our poor Muppets and their sartorially daring friend didn’t have a snowman’s chance in hell against an NFL football game and whatever else was on.

Meanwhile, adding insult to injury, a quick scan of feedback on Muppet-related Facebook pages reveals the sad truth that an awful lot of Muppet fans just plain hated it.  Aside from several comments about turning it off after the first five minutes, there was a lot of talk about how Jim Henson is spinning in his grave.

Well, call me crazy, but I liked it. It put funny new Muppet material on my TV, and it paired the Muppets with guest stars who seemed genuinely thrilled to be there. Could we really have demanded more than that? 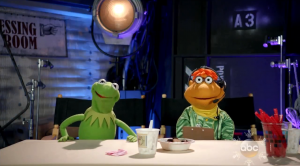 I’ve seen a lot of folks rant about how this special wasn’t appropriate for children, and didn’t have enough to do with the holidays. But I just don’t know where that’s coming from.  It’s actually the perfect thing for children at Christmastime because the experience of watching it is a valuable lesson in managing expectations.

What do kids do at Christmas? They get all excited about all the stuff they want Santa to bring them, and they manage to convince themselves that as long as they’re well-behaved, Santa will dump all of it under their tree.  I guess a lot of fans got similarly excited about this special.  The Muppets would share the spotlight with Lady Gaga!  There would be a bunch of Christmas songs!  It would be like a 21st-century version of John Denver and the Muppets: A Christmas Together!

If you were expecting that, you were bound to be sorely disappointed, just as I was disappointed the year Santa failed to bring me the Teenage Mutant Ninja Turtles Party Wagon. But you know what? I got a lot of other cool stuff that year. Action figures and Nintendo games and a denim jacket, which is what all the cool kids were wearing.

And we got some cool stuff in the special too.  There were several swell Gaga-free Muppet moments, including an audition sequence featuring “Shakespeare’s Ramlet” and the Amazing Carl, two “Muppets Classic Holiday Carols” by the Leprechaun Brothers, and a delightful bit with Kristen Bell dancing with Bobo.  These are all exactly the kind of scenes we’d want to see in a Muppet holiday variety special — they just happen to be surrounded by a pop star singing her songs with Elton John and RuPaul. There was at least a good half-hour Muppet special embedded in the 90-minute Lady Gaga show. Also, Zoot got two lines! 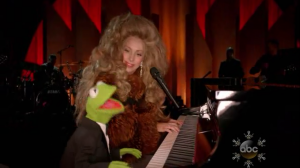 Even the Gaga-centric moments were entertaining. The opening performance of “Venus,” with Lady Gaga backed up by the Electric Mayhem and a chorus of Muppets, was a high-energy number exactly like something from The Muppet Show. (For those of you who thought the Muppets were singing “PENIS!” in that song: Grow up.) And then in the middle of the special there was that moment with Kermit and Gaga sitting at the piano and talking about life on the road and the loneliness of show business, and their dialogue sounded completely spontaneous and unrehearsed.  At times it even bordered on the sincere. Now that’s all we need from our Muppet holiday specials: A frog, a guest star, and some honest banter.

So there was more of Lady Gaga than the Muppets in the Lady Gaga & the Muppets special. So what? The Muppets have been part of considerably worse productions, and probably will be again, and we still got Piggy singing “Santa Baby” and Pepe ice-skating and chickens clucking “We Wish You a Merry Christmas.” I don’t know about you, but I’ll take all of that in my stocking.

Click here to step on Kristen Bell’s foot on the Tough Pigs forum!