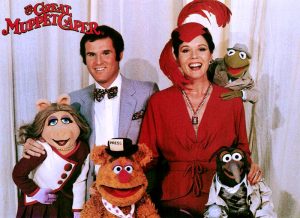 But what about the cameos? Or, as coined by this film, the “very brief cameos”?

Although Great Muppet Caper isn’t stuffed to the brim with cameos like The Muppets (2011) or Muppets Most Wanted, or even its predecessor The Muppet Movie, there are certainly plenty of very brief, but very memorable, cameos that we hold near and dear to our hearts.

So, without further ado, here are my top ten favorite very brief cameos in The Great Muppet Caper.

(Honorable mentions go to Michael Robbins (he hates pepperoni!) and Peter Hughes (Stanley from the Dubonnet Club), who apparently were celebrity cameos whom I know absolutely nothing about. Sorry dudes! I’m sure you’re someone in the world’s favorite Muppet cameos!) 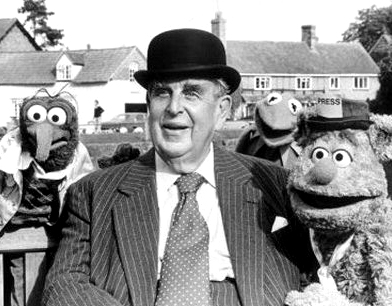 You might remember Robert Morley as the human embodiment of all British stereotypes, who is the first to meet the trio after they’ve been flung out of the plane and land in a pond. After all, he’s the one who tells them of The Happiness Hotel. So, if you think about it, he’s kind of the catalyst for a lot of major plot points in the film. Huh!

I’ve never seen Morley in anything outside of Great Muppet Caper, but friends, this man deserves mad props for those eyebrows. 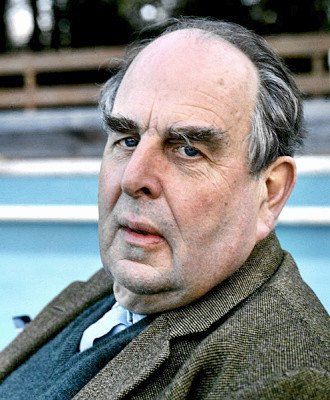 I mean, what a look! 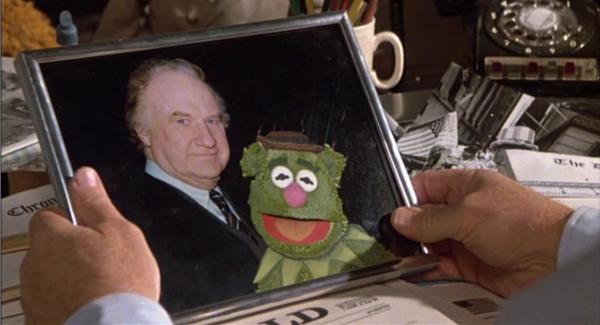 Better known for his roles in 12 Angry Men, Shampoo, Heaven Can Wait, and All the President’s Men (or, my favorite, While You Were Sleeping), Jack Warden marks his cameo with a bang (of his fist! – on his desk! – repetitively!). Though maybe more than just a cameo, Warden is only in the second scene of the movie and then doesn’t appear again, so we’ll go ahead and count it.

Not only is he the first to take part in the running twin joke, he’s also in that picture with Fozzie and Kermit’s dad, which is possibly one of the most hilarious Muppet sight gags ever to exist. Genius. 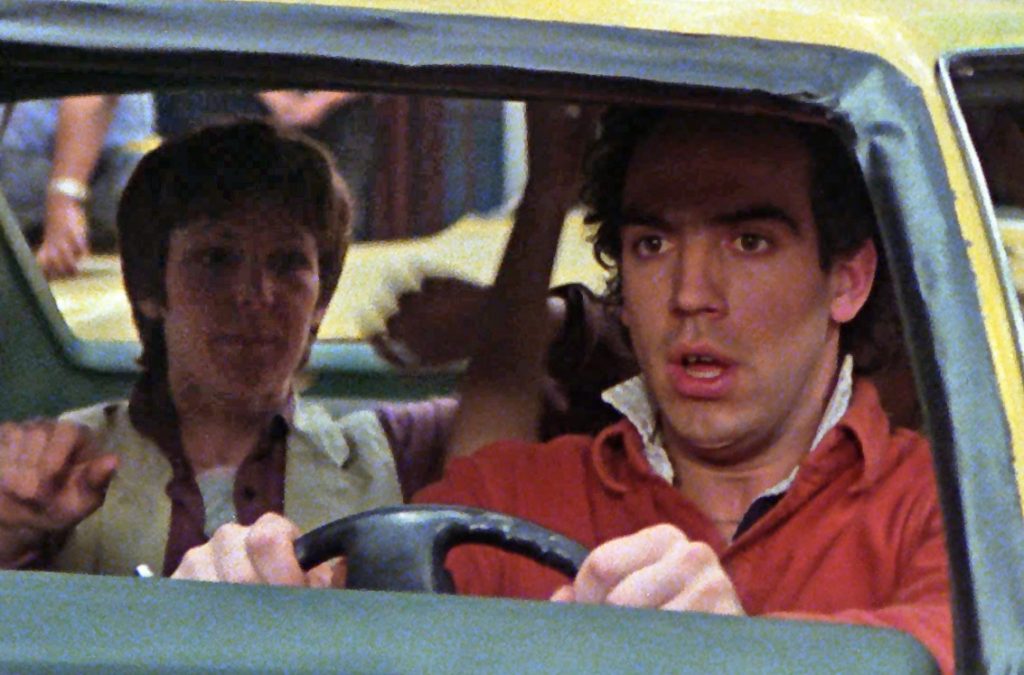 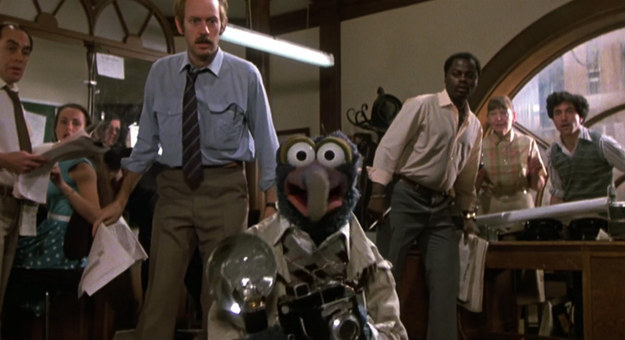 We all love seeing Muppet performers cameo in the films. It’s like a special treat for Muppet fans to spot them when most other people wouldn’t have a clue.

Normally performer cameos rank much higher on these types of lists for me, but Richard, Kathy, and Frank are pretty low (and combined into one ranking) since they’re all shown for literally two seconds of the movie (if you watch this video you’ll find Kathy and Richard at :59-1:01, and this video shows Frank at :40-:42).

Although incredibly quick, blink-and-you’ll-miss-it cameos, we’re still glad to see these familiar faces in the opening number and second scene of the movie! 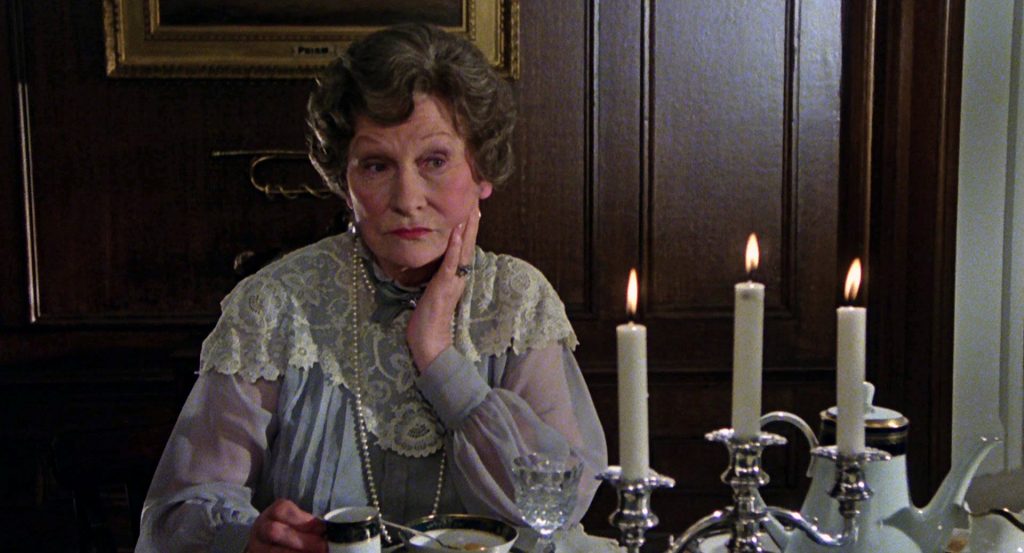 Ah Dorcas! The only lady besides Kathy Mullen on this list!

While Joan Sanderson might not wield quite the comedy chops we get from Cleese, without her the dinner sequence wouldn’t be so delightfully hilarious. She holds her own with her blasé voice and droning questions, making for one of the best scenes in the film.

Plus we now know Dorcas is a real name! Why are there not more Dorcases in the world?! I demand answers, people!

Peter Falk manages to deliver what just might be the most memorable monologue in all of Muppet canon in only two and a half minutes. It stirs up some long unanswered questions within all of us. I mean…

Who exactly is Bernie? Does he bear any resemblance to Piggy’s agent? Why a dry cleaning establishment? How does Bernie justify joining the circus of all things? If Kermit’s kids are grown up and he never sees them anymore, how could they be juvenile delinquents? Wouldn’t they be adults? What does the guy down the street do with the dry cleaning place once he buys it for a song? What happens to Bernie? What happens to Kermit’s sister? Is there really such a thing as a glass slipper business?

Moreover, is this whole story what actually happened to Peter Falk’s character? Does he honestly believe that Kermit just went through all of this? Is he making this up as he goes along? Is this the story he tells everyone to lure them into buying watches? Where did he learn how to steal watches in the first place? Is this whole moment somehow related to Columbo – which I’ve never seen?

Y’ALL, I HAVE SO MANY QUESTIONS. 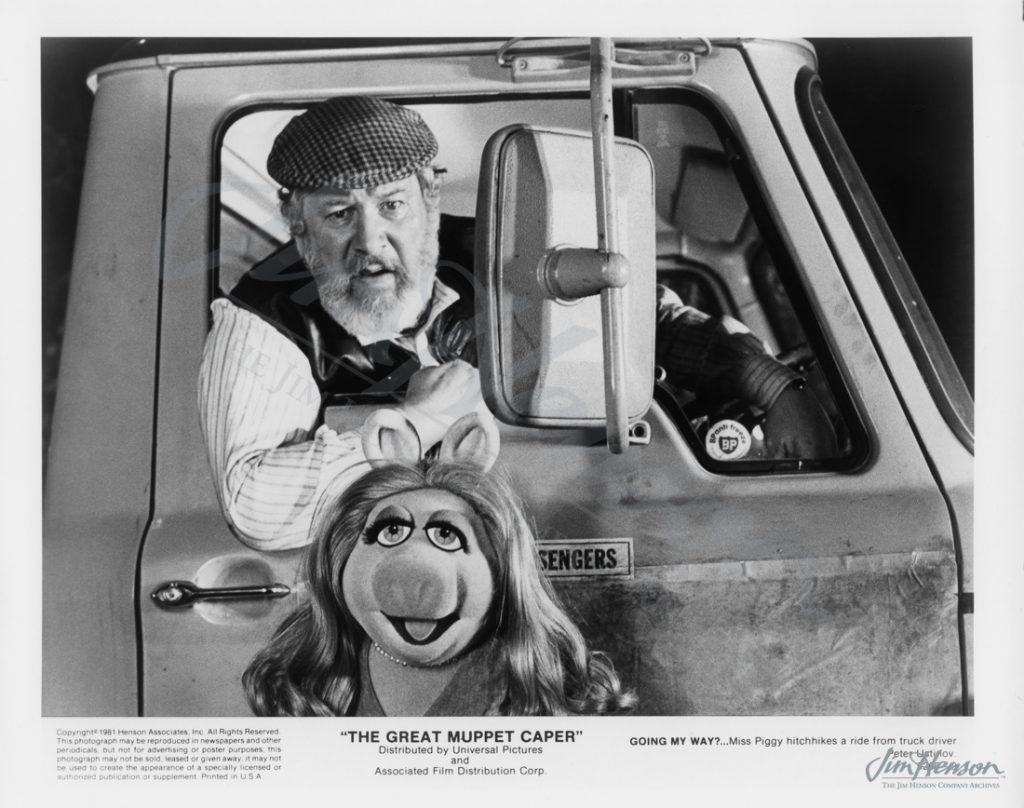 It’s not a Muppet movie without Miss Piggy karate chopping someone, sending a flying kick to a face, or, in this case, throwing someone out of their own vehicle in order to steal it. That someone in Great Muppet Caper happens to be Peter Ustinov.

Perhaps on his own Ustinov wouldn’t rank quite this high on the list, but due to his brief appearance in the film we’re given… 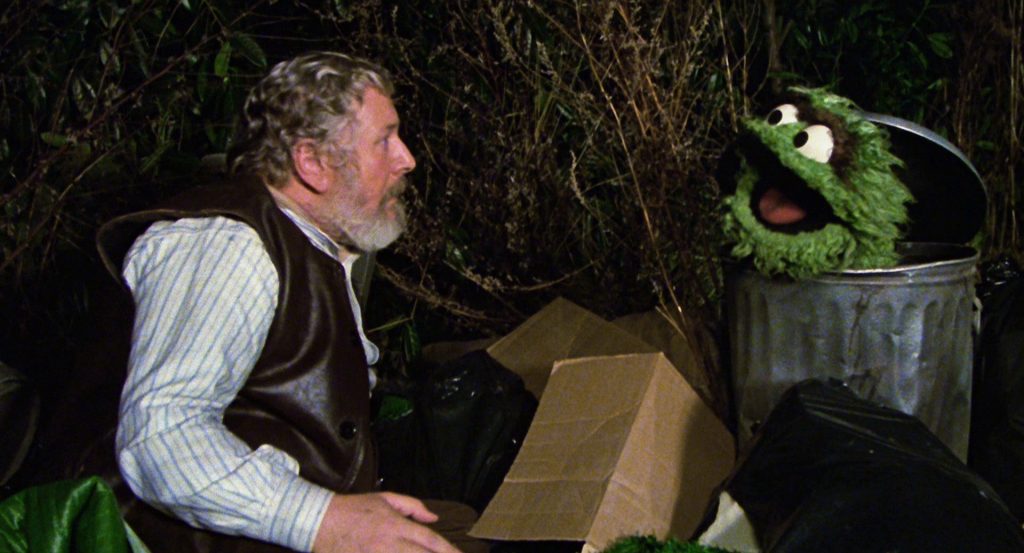 Ah, the good ol’ days when Sesame characters could pop quickly into Muppet films for a line or two. We got Big Bird hitchhiking in The Muppet Movie, and a whole lot of others at the ends of both The Muppet Movie and Muppets Take Manhattan, and in this one we get Oscar the Grouch being his normal grouchy self!

Not only that, but Oscar is the one who delivers the line, “A very brief cameo.” Brief indeed, but still wonderful! 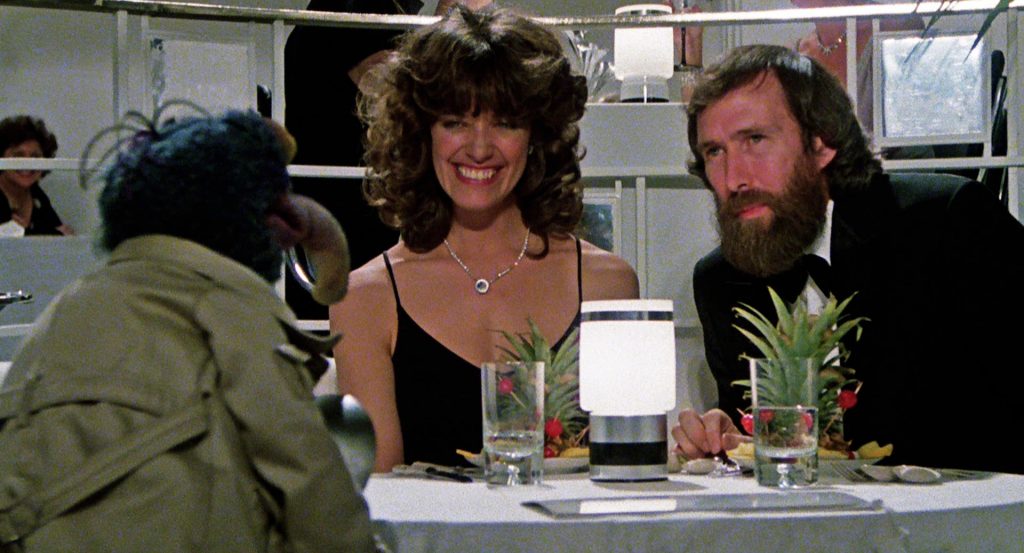 It goes without saying that it’s always kind of the best when Jim Henson pops up in his own movies. Like a number of his cameos, his appearance is very brief (and in Caper he speaks no lines at all), but it’s still quite memorable.  (Also, shout-out to Muppet workshop designer Amy Van Gilder as Jim’s dining companion!)

Obviously Jim takes the cake as the favorite performer cameo almost every single time, but this film we must make an exception for… 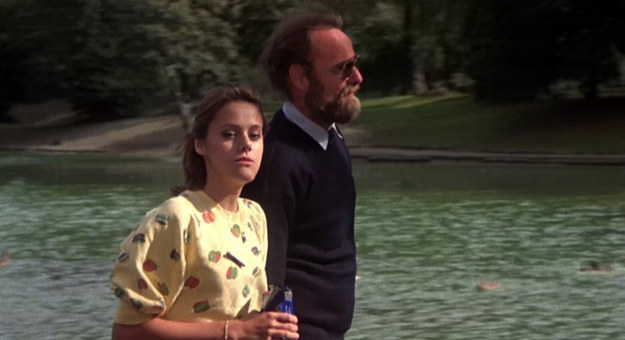 … another performer, Jerry Nelson, and his daughter, Christine Nelson.

It’s something of a sentimental moment for fans who know of Christine’s battle with cystic fibrosis. Jim gave her a speaking role in Great Muppet Caper so she could become a member of the Actor’s Union, but sadly Christine passed away a year later.

But not only that, it’s just a funny moment altogether. Christine and Jerry swiftly bring back the running twin gag without Fozzie even being there to prompt it. Although brief, this cameo definitely adds to the in-world hilarity.

And now, drum roll, for our number one slot we have… 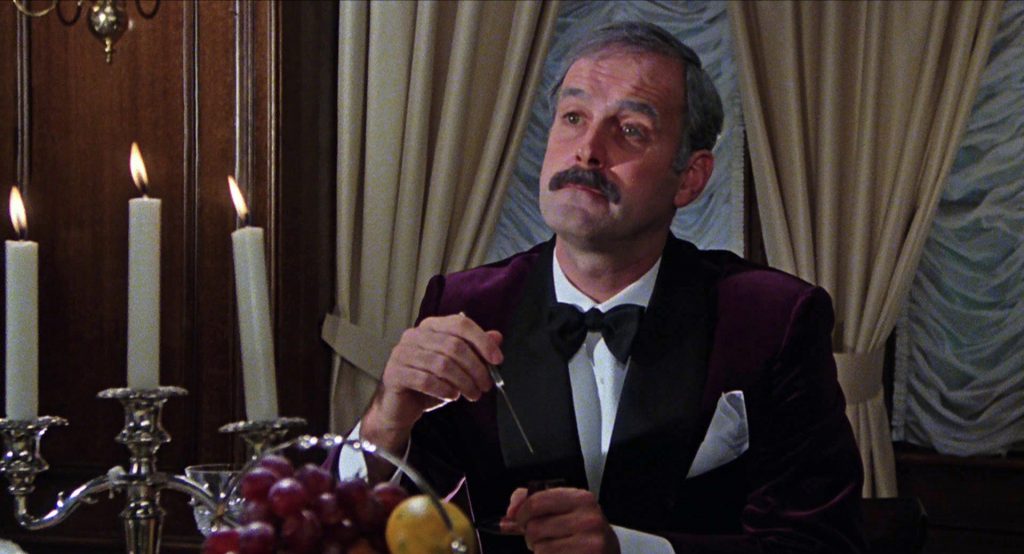 I mean. Of course it is. Who else would take first place?

John Cleese’s daft portrayal of the bored-stiff Neville adds such a great juxtaposition to Piggy’s thrilling break in of the house at No. 17 Highbrow Street. His comedic timing is delivered perfectly alongside Joan Sanderson (DORCAS!) and watching the dull sludge of a dinner conversation drag on never ceases to entertain. Plus Cleese defensively carrying around a fireplace poker only to demurely give Piggy and Kermit restaurant suggestions after he’s found them hiding in his closet is pure perfection. We really couldn’t expect any less from a Python, could we?

A long cameo, sure, but an astounding one at that. Thanks John Cleese for giving us Neville and the line, “I thought you said the pets were dead.” What would we do without you?

Click here to make a very brief cameo on the Tough Pigs forum!