In case you’ve been living under a pile of ectoplasmic residue from a class-5 corporeal poltergeist, you’ve likely heard that there’s a new Ghostbusters movie coming out this weekend.  And like the undead featured in the film, every franchise returns to life sooner or later.

As a child of the ’80s who grew up obsessed with Muppets and movies, a Ghostbusters/Muppets crossover would have exploded my tiny head.  And it totally did (don’t worry, I got better) in the pages of Muppet Magazine.  In the Spring, 1985 issue, Steve Martin hung out with the Muppet Babies, Kermit interviewed some gymnasts, Fozzie Bear shared the lyrics to his hit rap song, and there’s an entire comic spoofing the 1984 classic ghost bustin’ film Ghostbusters.

You may also have heard about the controversy surrounding the new Ghostbusters movie, and how people’s childhoods are being ruined because girls are being let into their boys’ club.  What do you think would happen to the childhoods of those curmudgeons if they knew that Bill Murray and Company were first replaced by a frog, bear, and a whatever??

Because Muppet Magazine is long out of print (Hey, Disney! Wanna make some money? Reprint these things!), we have no problem sharing the Ghostbusters parody with all of you!  Below, you’ll find the “Grossbusters” comic in its entirety, followed by a little commentary by the Ghost of Muppet Fandom Present (that’s me!). 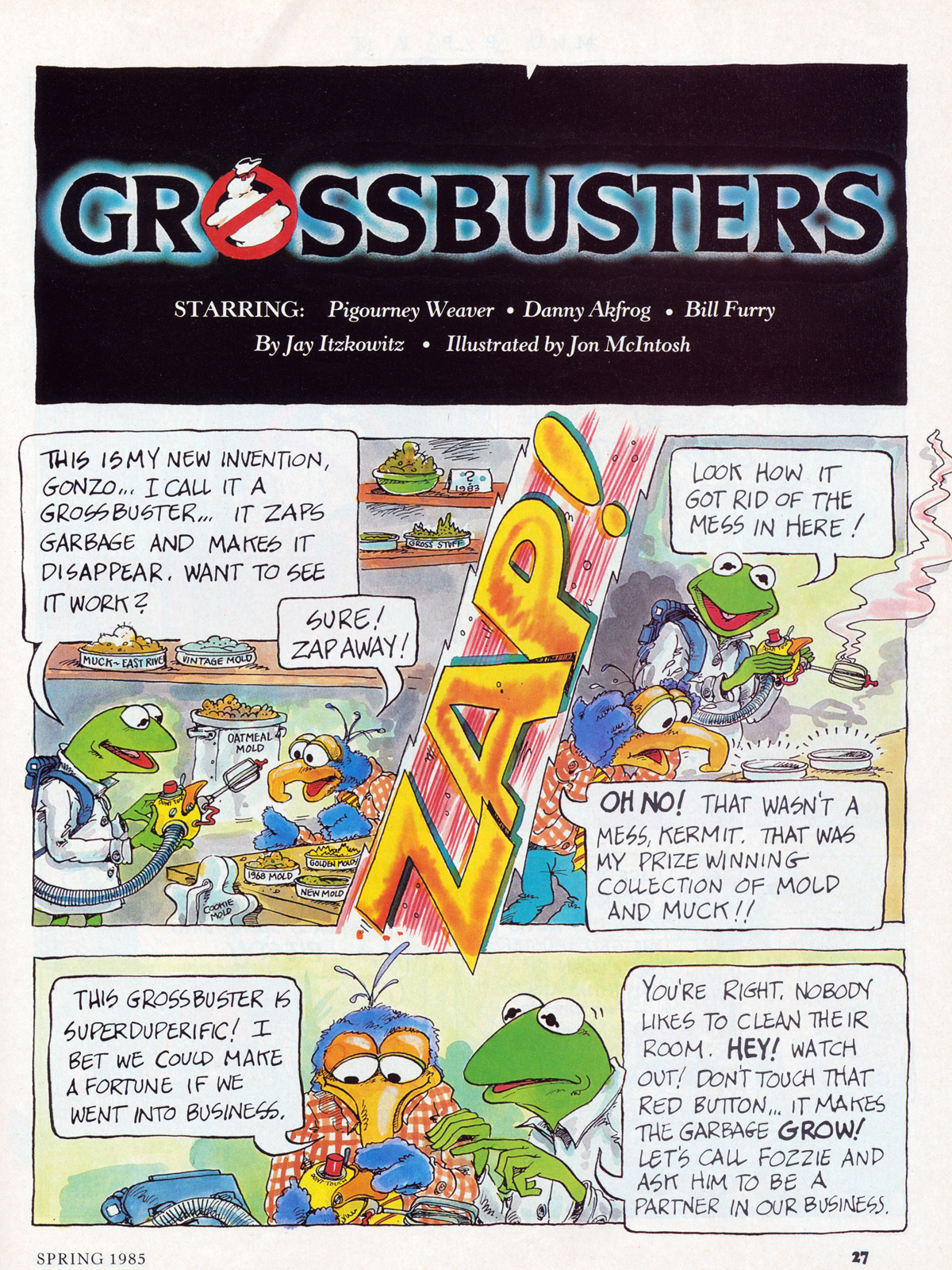 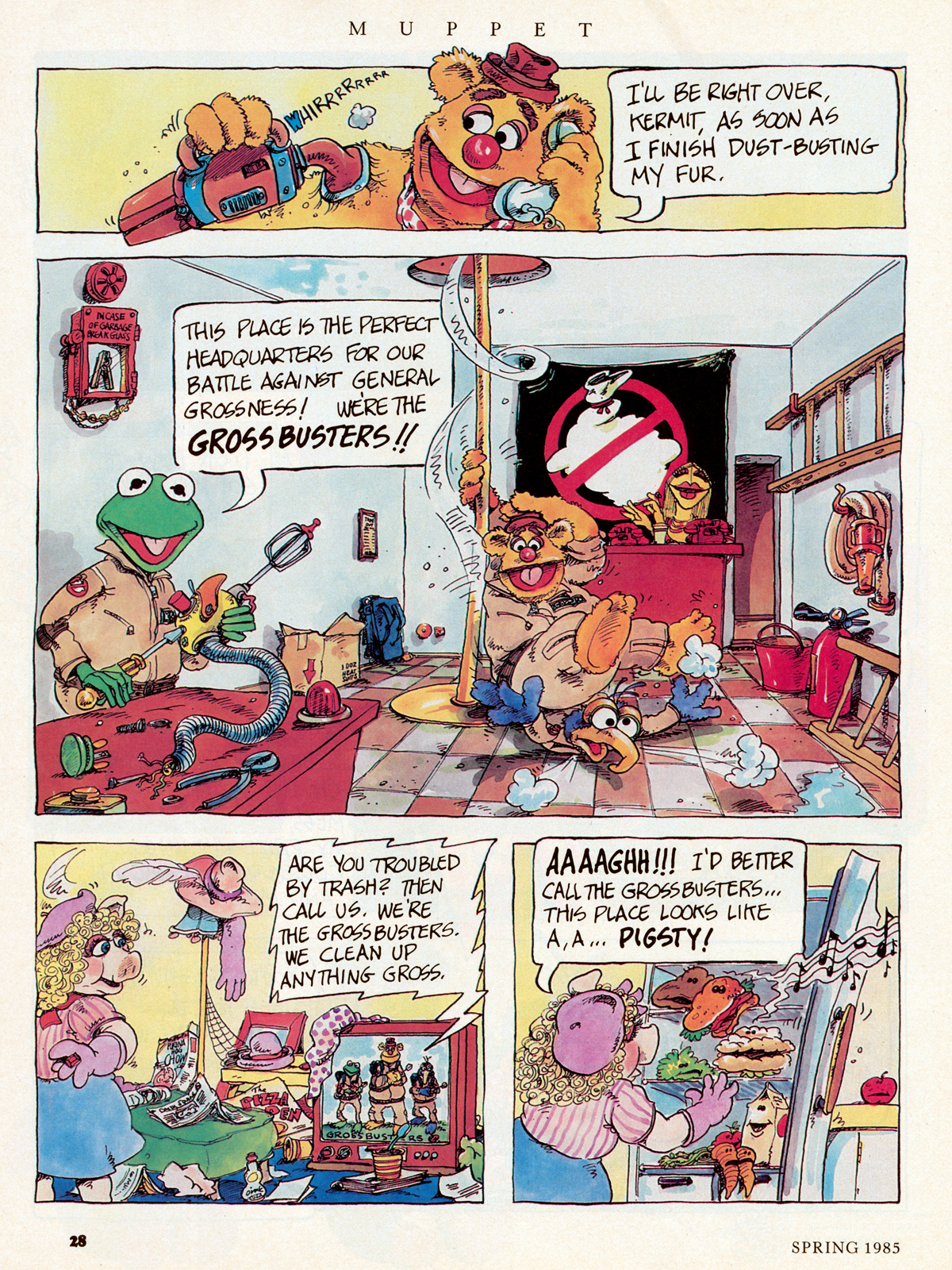 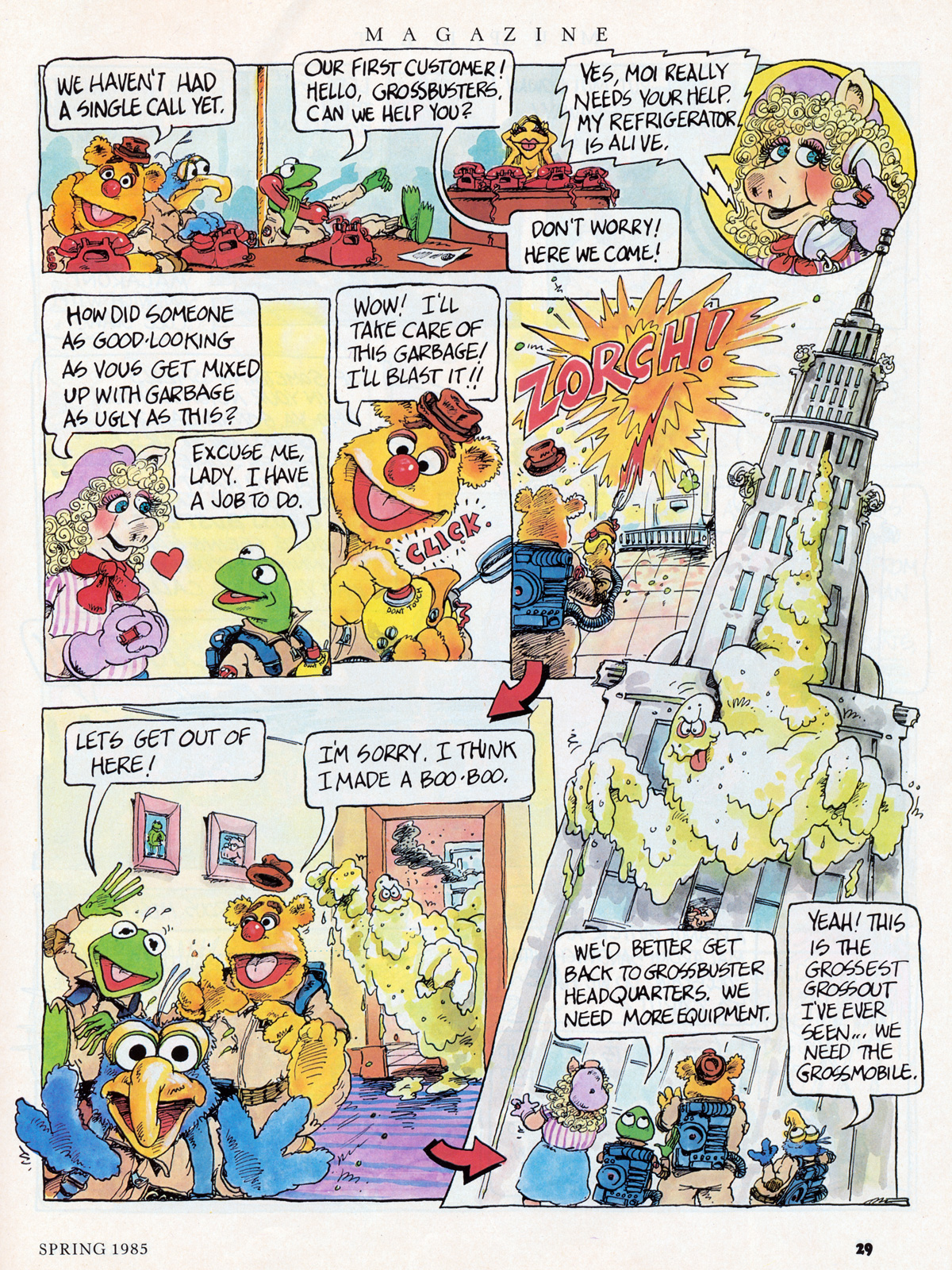 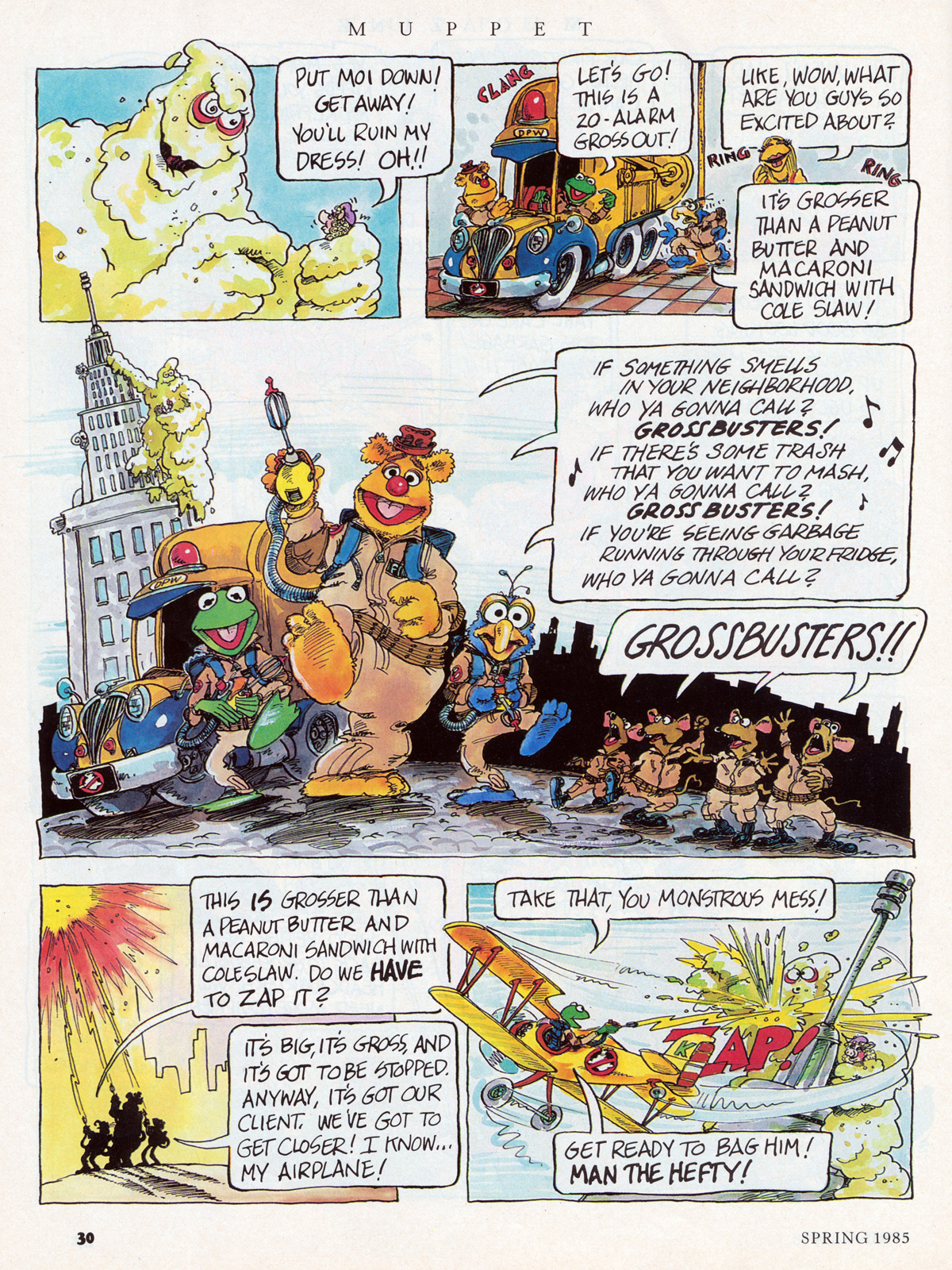 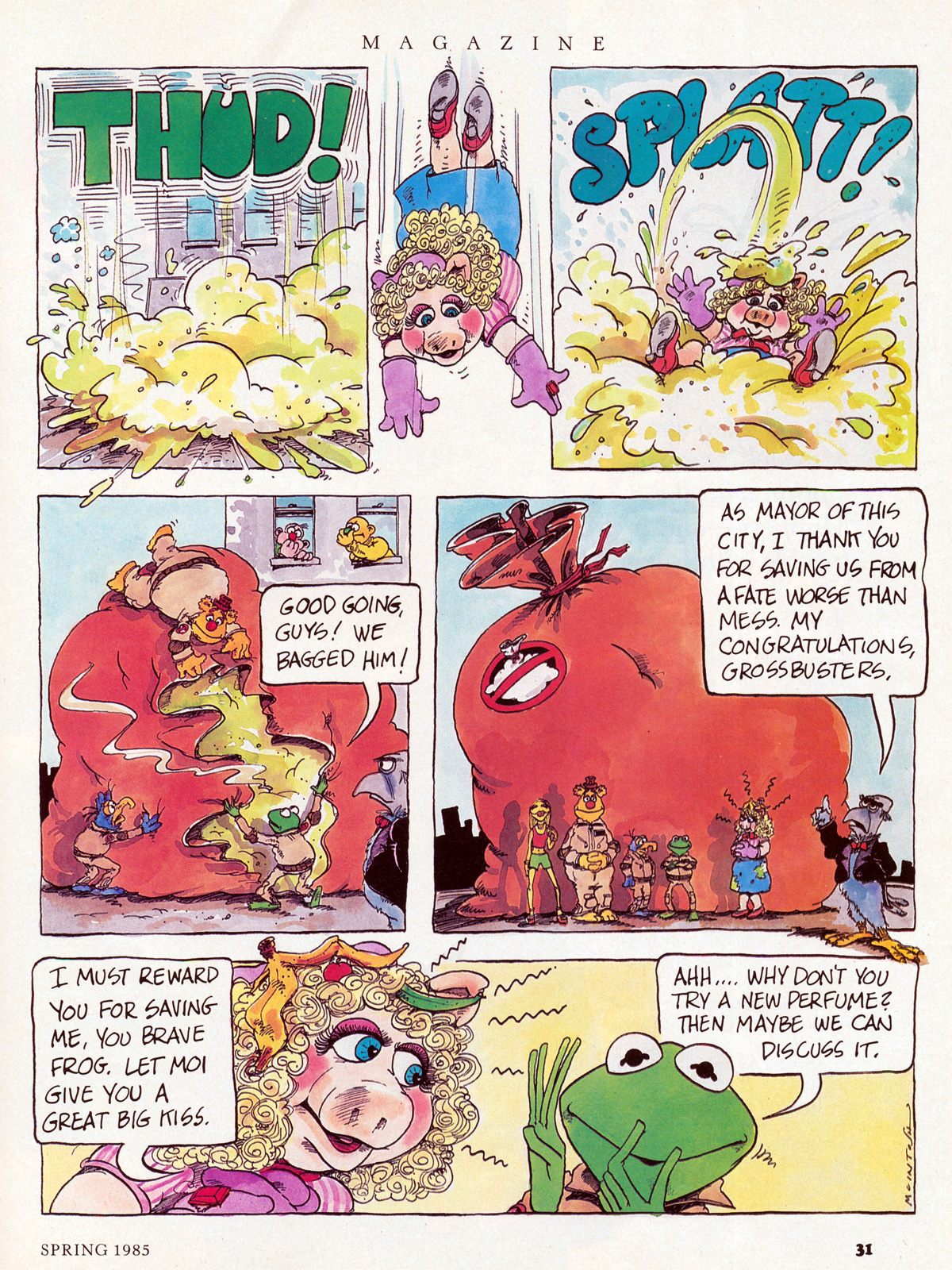 The title of this spoof obviously came before the story.  Why garbage?  How does that have anything to do with ghosts?  Or with Muppets?

The Muppified celebrity names are perfect: “Pigourney Weaver”, “Danny Akfrog”, and “Bill Furry”.  But no names for Gonzo and Janice?  How about “Harold Ignoramis” and “Janny Potts”?

Also, it’s obvious that Kermit is the Venkman and Fozzie is the Stantz, and not the other way around.

So, Kermit’s an inventor now? I feel like this parody would’ve worked better with Bunsen and Beaker.  Then again, they’re both a little too “Egon”.

And there’s a button to make garbage grow?  Terrible product design, Kermit.  Leave the science to the Honeydews.

Considering how much this comic deviates from the film, I appreciate how it keeps the plot point of Piggy/Dana’s refrigerator containing the source of the problem.  And all the junk food.

I totally dig the Grossbusters’ theme song.  I mean, they picked a pretty terrible time to ignore the garbage monster and dance, but the uniformed backup rats make it all worthwhile.

And now the Grossbusters have a plane???  And the Ghostbusters parody has shifted gears to become a King Kong spoof??  Sure, why not?  If Kermit can invent a device that makes garbage grow, why not just throw all reason and logic out the window and let him fly a biplane.

And Sam the Eagle is the mayor, arriving just in time (wearing just a jacket and bow tie with no shirt) to congratulate the Grossbusters.  This is great casting, especially if we could’ve seen the scene where Venkman convinces him to let the Ghostbusters out of jail so he could save the lives of millions of potential voters.  Just imagine Sam’s epic side eye as he considers the political implications and then gives the Grossbusters the key to the city.

And then it ends almost like the film: With our female lead covered in discarded foodstuffs, begging for a kiss from our star.

What did you think of the Grossbusters comic?  Will it be better or worse than the new Ghostbusters reboot??  Head on over to the ToughPigs forum and let us know! 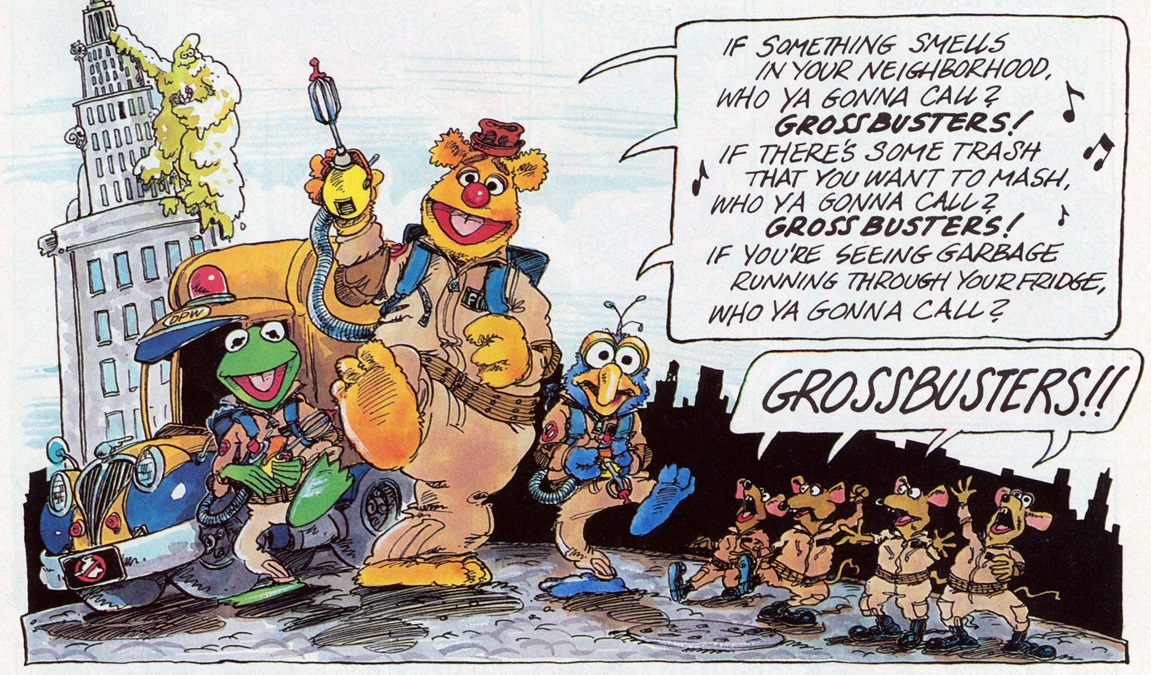 Many thanks to ToughPigs pal Scott Hanson for the scans!

Click here to create mass hysteria – frogs and pigs living together – on the ToughPigs forum!