An Ode to the Fraggle Rock Happy Meal Toys

Chances are you have one of these somewhere in your home.  On a shelf, in a box, or in a place of reverence.  You’ve probably seen them in most of the vintage toy stores you’ve visited.  They’re easy to find on eBay.  They are, surprisingly, one of the longest-lasting legacies of Fraggle Rock.

Of course, I’m talking about the Fraggle Rock McDonald’s Happy Meal toys.  Introduced in 1988, they’re turning 30 this year!  If a real radish turned 30, it might be stale enough to actually turn into a car.

These days, Fraggle Rock toys are almost impossible to come by.  But due to the national availability of McDonald’s toys and the “collect everything” mentality of the ’80s, these cruisers have popped up everywhere over the years.

So in the spirit of overthinking things (because this is ToughPigs, where we overthink more before breakfast than most people do all day), let’s talk more about these classic cars! 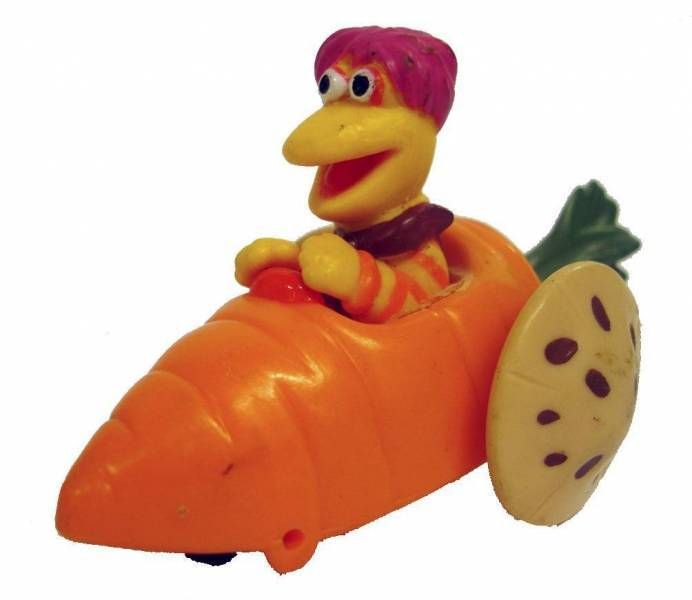 First, let’s address the Gorg in the room.  Why are the Fraggles driving vegetables?  I’ve seen all 96 episodes of Fraggle Rock, and I have no memory of a Fraggle in any sort of car-like vehicle.  Even with the caves being as vast as they are, they tend to travel on foot (without shoes, even!).  Perhaps they need a faster way to reach the Trash Heap?  Or they paved the way to the Crystal Cavern, and now the ground is nice and smooth and won’t screw up their shocks.

Okay, so maybe they have a good reason to build tiny cars, by why are they made from vegetables?  This one makes a bit more sense, since the radishes the Fraggles pick come from the Gorgs’ garden, which are oversized.  Naturally, this would never work with the tiny radishes we Silly Creatures buy at the grocery store.  Does this also mean that the Fraggles intend on eating their cars after they’re done driving?

In a bold response to the Big Oil industries, these toys placed Gobo and the gang in vegetable oil fuel cars, thus eliminating the need for gasoline.  The Fraggles have always pushed an eco-friendly agenda, so it’s nice to see their message extended to the oil lobby and automotive industries. 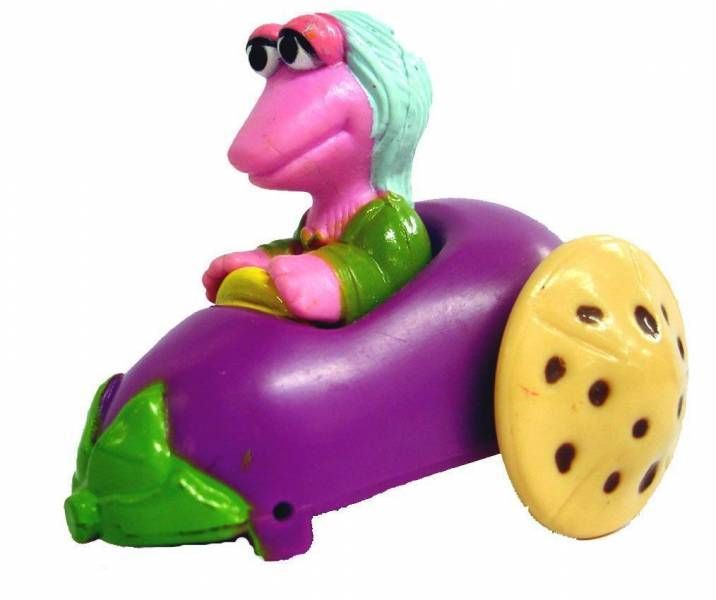 In a world where Mokey is conveniently missing from most Fraggle Rock merchandise, it’s nice to see all five Fraggles represented.  And Mokey gets her own car!  Didn’t see that coming, did you? 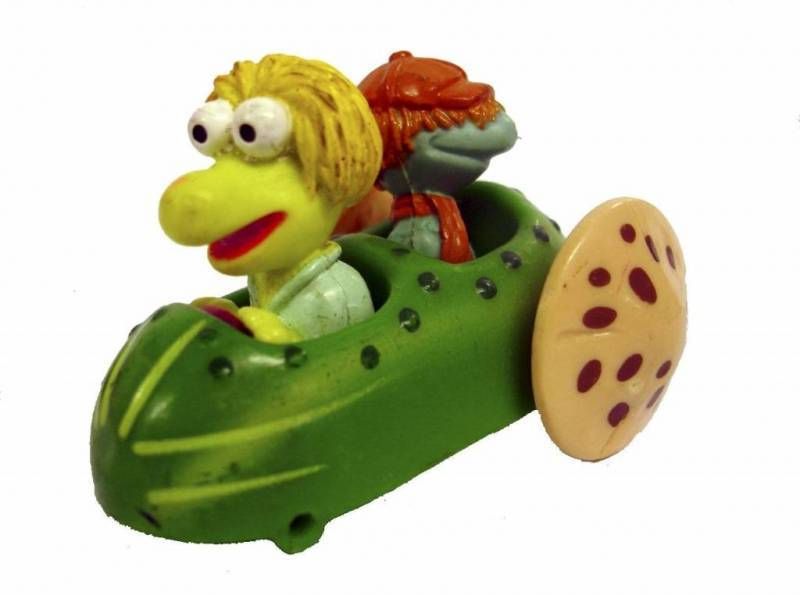 Still, with only four toys, someone’s going to have to double-up.  And those someones are Boober and Wembley.  It looks like Boober lost the toss, as he’s sitting in the “way back”, facing the wrong direction (which, I guess, fits his pessimistic attitude… somehow?).  Although now that I think about it, Boober would make a better navigator, as Wembley would have trouble deciding whether to turn left or right on his own, and would likely crash his cucumber into a tree. 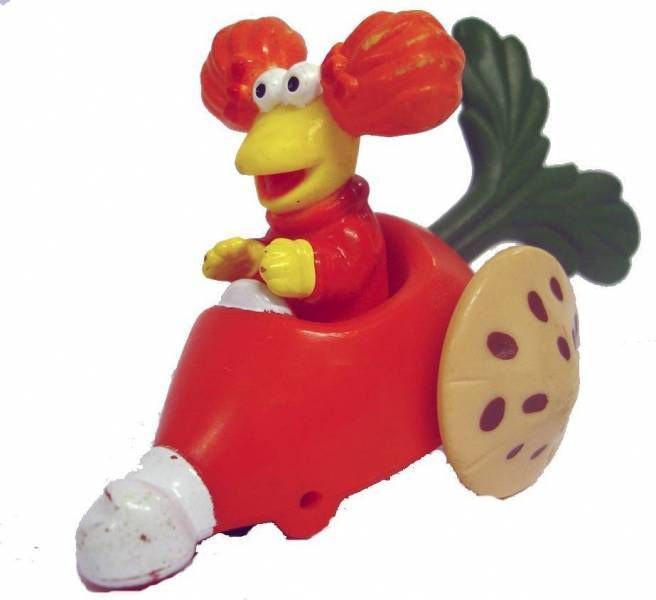 And I guess they chose their vehicles based on their own color schemes?  Orange Gobo is in the orange carrot, Red is driving the red radish, Mokey gets the purple eggplant, and the greenish Boober and Wembley are sharing the cucumber.  That’d make it easier for each of the Fraggles to find their cars in a crowded parking garage.

The Other Fraggle Toys

Someone out there who’s memorized the entirety of the Muppet Wiki is probably ready to correct me on the date of the toys’ release.  It’s true, the Fraggle Rock cars technically debuted in 1987 (thus making them 31 years old, which is not divisible by 10 and therefore not worth our attention).  But in 1987. the toys were only available in West Virginia as a test market, with the set we know and love premiering to the entire country in 1988.

That test market also got a couple toys that didn’t make it to the rest of us: Doozers!  Two Doozer construction vehicles (seen above) were offered in that test run, but were eventually replaced with the Mokey and Wembley/Boober cars.  As you can imagine, those Doozer cars are incredibly hard to find and likely very expensive.

Two other toys were offered with the main set as well, although not as widely-known.  If you got a Happy Meal and you were under 3 years old, you might’ve gotten the offering for tiny hands: Gobo or Red Fraggle figurines (seen below).  These little toys had no articulation, and were made from a softer plastic.  So essentially, your basic Fraggle toys with no choking hazards for toddlers. 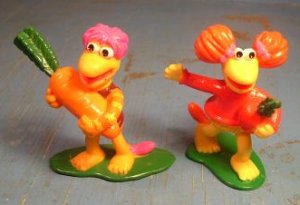 The Fraggles Get Animated… Again

The original Fraggle Rock series ended in 1987, with the animated series beginning soon after.  So the McDonald’s toys were released at a time when one show was still high in reruns and another was brand new.  To promote the toys, they decided to go the animated route, so no sign of any puppets.  Or Muppet performers.  Or, surprisingly, the actual animation style used in the show.  The cartoon here is way more fluid and interesting, which might’ve helped the animated series from getting canceled so soon.

Anyway, the commercial is totally worth 30 seconds of your life:

I can’t be the only one who noticed that the wheels on the Fraggle cars look like chocolate chip cookies.  I guess they’re supposed to be mushrooms, but all I ever saw were baked goods. 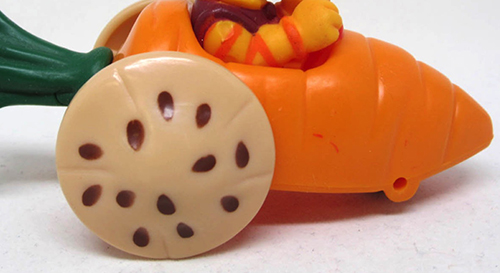 So happy anniversary to those cute Fraggle toys that some of us have owned for the past 30 years!  Maybe today’s the day to take yours out for a spin?

Click here to go for a spin around the cave to the ToughPigs forum!