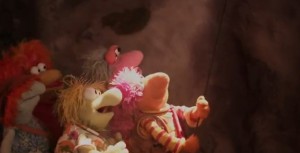 There really isn’t a better intro than this to get you excited: New Fraggle Rock Video.

Long story short, The Nerdist Channel, Ben Folds Five, Anna Kendrick, Rob Corddry, and The Jim Henson Company teamed up to produce this music video for Ben Folds Five’s new song, “Do It Anyway”.  The song has a Fraggly feel, but that might have more to do with the fact that ALL FIVE FRAGGLES plus Traveling Matt appear!  Stop listening to me ramble on and watch the video:

From the press release, here’s what Nerdist Channel host and founder Chris Hardwick had to say:

Hardwick describes how this cluster of awesomeness happened:

“In a meeting with Lisa [Henson, CEO, The Jim Henson Company], she casually said, ‘Next year is the 30th anniversary of ‘Fraggle Rock.’ Would you want to do anything with the Fraggles?’ ‘WHAT THE [expletive]?? That’s an OPTION?!’ I loudly replied. I think I scared her a little. I knew Ben had a new album releasing in September so I threw his name out. Lisa said ‘that would be amazing’ without hesitation. It was beautifully serendipitous.  It seemed like a no-brainer to me, but I still cautiously pitched it to Ben, not really knowing his relationship with the show. I think I just spit words out, ‘YOU. VIDEO. FRAGGLES. ME PAY FOR!’”

Folds was VERY interested, it turns out, and had the perfect song in mind. “When Ben sent me ‘Do it Anyway,’ I knew within the first five seconds that the song was perfect—the bouncy piano… the dancing bass …it actually sounded like it was intentionally written for the Fraggles. I can never fully express the amount of nerdy joy that I felt on set seeing Red Fraggle jump around on Ben’s piano,” said Hardwick. “And the fact that I was able to weasel my way into the video was a dream come true.”

Formed in 1994, Ben Folds Five changed the course of indie rock in the mid-1990s before amicably parting ways in 2000 to pursue different artistic ventures. Now, after twelve years, the indie pop trio has returned to bring their unique pop sensibility to both Fraggle Rock and the Nerdist Channel.

Red Fraggle said, “We had a great adventure in Outer Space!  Ben, Robert and Darren love music as much as Fraggles do, so we had lots of fun.  It would be wonderful to have them come play more music in the caves with us, but I am not sure they can fit through the hole in the floor!”

And because The Nerdist Channel continues to be awesome, here’s the behind-the-scenes video: 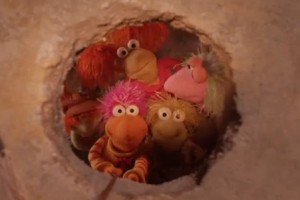 Click here to headbang with Mokey on the ToughPigs forum!

I Don’t Know What This Is: Just Dance Covers Fraggle Rock