By now you may have heard about FOX Business News’ (sister network to FOX News) latest slow news day pointless tirade.  They are claiming that the far left’s liberal agenda is using the Muppets to attack the oil industry and brainwash children into being anti-corporate.  In case you missed it, here’s the video:

Let’s get the easy part out of the way first.  FOX News is full of crap.  They’re so full of crap, there isn’t any room for actual biological crap.  They’ve got crap overflowing from their monocles and bowler hats.  If you don’t have a splitting headache from all the eye-rolling you just did after watching the video, then read on to see why their crappiness knows no bounds.

I have a lot of beef with everything FOX News says and does, as I’m sure most of you do too.  But I’m going to try hard to avoid talking about their lack of journalistic integrity, homophobia, classism, closed-mindedness, and their own brand of brainwashing.  That’s another article for another day, and given their penchant to talk about the “evils” of the Muppets, I’m sure we’ll have our chance eventually.

First off, FOX News attacks the portrayal of Tex Rich-Man (as they so lovingly mispronounce him) as being villainized for being a self-made success who happens to work in the oil industry.  But if you were paying attention to the film (which Rupert Murdoch probably was not), you would’ve noticed that Richman’s quest for oil was never mocked, nor was his abundant wealth.  Richman’s greed was on display, as was his unwarranted anger toward the Muppets.  He was seen as an abusive employer and loose cannon, but not because he was rich.  It was because he’s a dick.  And if there’s any lesson to be learned, it’s not to avoid wealth or success, it’s to treat people and their property with respect.  And to maybe be a little smarter about where you want to drill, baby, drill.

Despite the fact that the Muppets have a history of “green” activism, they never actually spoke out against Richman’s quest for oil during the course of the film, only that he intended to tear down their theater in search of it.  I understand that some conservatives care less about the preservation of the arts than us, but they all still claim to love the Muppets (or at least the wholesomeness that the Muppets stand for).  If a real oil baron was presented with the opportunity to destroy the Muppets’ home and namesake, I bet they’d think twice about actively going about destroying the theater.  Those actions say a lot more about Tex Richman the character than Tex Richman, representative of the oil industry.

But of course, this isn’t the first time a suit has antagonized the Muppets.  In The Muppet Movie, restauranteur (and self-proclaimed, “just a businessman”) Doc Hopper had one dream: To open a chain of frog legs restaurants.  But it wasn’t his dream (which, if you’ll remember, Kermit encouraged Doc to pursue by the end of the film) that held him back.  It was his Ahab-like obsession with snatching Kermit the Frog and forcing him to star in his commercials, live or stuffed.  There probably weren’t many kids who took the message as the anti-capitalist “Don’t try and open your own restaurant!”, rather than the intended, “Don’t try to take advantage of people” and “No means no”. 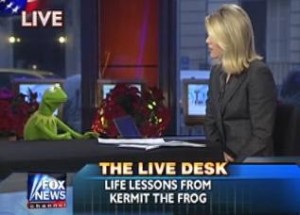 Over on The Muppet Show, J.P. Grosse represented the capitalist slumlord, forcing his wants and needs (and favorite pet) onto the Muppet crew.  Okay, in FOX News’ defense, he does paint a pretty awful portrait of a businessman.  He’s ugly and crude, he usurps Kermit’s authority at every turn, he has offered money to bring sex and violence to the show, he sold mineral rights to the guest star’s dressing room, he tried to replace his workforce with unpaid machinery, and his background appearances as a Production Assistant on Muppets Tonight suggest a sad fall from grace.  Not only is there little to like about Grosse, but he creates a distaste for authority and those who “have”.  I’m pretty glad FOX didn’t do their research and find this character, or else they’d have a small step up in their argument.  Maybe I should just delete this paragraph…

One of the worst Muppet villains of all is Mr. Scrooge, who is the epitome of the stingy, grumpy, badly-dressed businessman, both in and out of the Muppet universe.  But what was the source of his villainy?  Was it his money or the fact that he was a private business owner?  No, it’s the fact that he’s an asshat who treats people (and frogs and rats and little bunnies) like garbage and doesn’t know how to share his good fortune.  We know this because Scrooge becomes much less of a, well, scrooge when he turns his attitude around.  He gets to keep his money and his business, proving that there is certainly more than one type of capitalist in the world.

Like, for example, the Jim Henson-type of capitalist.  He was pretty liberal when it came to commenting on consumerism (as he did in “Business Business“) , but he was still the President of his own company with his own sympathies toward businessmen (as seen in the Muppet Meeting Films).  From what his employees said about him, he was brilliant at balancing the big-picture business with his boundary-pushing art.  Jim knew better than anyone that not all businessmen were evil, only the ones who went about it with cruel or selfish intent.

Let’s not forget who is behind the new Muppet movie, with it’s supposed commie pinko agenda.  The Walt Disney Company: One of the largest, most powerful companies in the world.  If there were any concerns about an conspiracy, Disney would’ve intervened.  And if not, then maybe they should be the focus of FOX News’ ire, and not the Frog.

So let’s recap.  The Muppets aren’t pushing any sort of secret liberal agenda, not all businessmen are evil, consumerism can be good, FOX News is full of crap, and the Fraggles are probably Communists.  I think we all learned something today.

As an added bonus, here’s Conan O’Brien’s take on the story:

Click here to dig for sweet sweet oil, see, on the ToughPigs forum!